Rosario: Steve King is racist, but his supporters don’t think so

Steve King’s racist comments propelled his campaign to national attention and left people asking why any Iowans voted for him. The answer is complicated. 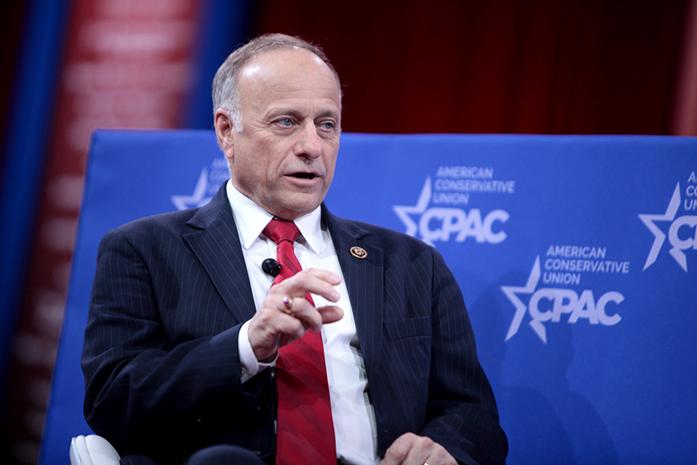 Republican Steve King will retain his congressional seat in Iowa’s 4th district, despite a greater challenge than in past years. He prevailed with 50.4 percent of the vote to Democrat J.D. Scholten’s 47 percent.

King is nationally infamous for making racist comments and associating himself with white supremacists. Last month, King endorsed Toronto mayoral candidate Faith Goldy, who has appeared on a podcast hosted by a neo-Nazi website. Then, The Washington Post reported that King had met with a far-right Austrian party founded by a former Nazi SS officer.

King lost as many as half a dozen corporate sponsors and was denounced by the chairman of the National Congressional Republican Committee.

Of course, King’s rhetoric is nothing new. But up until this year, he won his seat in landslides, by at least 22 percentage points. So, why does Iowa’s 4th district keep electing someone who seems obviously racist?

The answer is, many of King’s supporters insist that he’s not.

The Guardian recently contacted Republican party officials in all 39 counties in King’s district. 20 answered, and all of them said that King is not racist. Dozens more of King’s constituents agreed.

Still, they know of and defend many of King’s remarks—for example, that when he says, “We can’t restore our civilization with someone else’s babies,” he doesn’t mean just white babies or white civilization.

I’m not denying that some of King’s constituents probably understand his comments to be racist and voted for him anyway. But I’ve recently learned that seemingly obvious racism is not so obvious to others.

I grew up in the Quad Cities, an area that is pretty racially diverse. A teacher in my old school district is currently under investigation for wearing blackface to a Halloween party. When the local news reported the incident, dozens of commenters said blackface wasn’t racist, and people shouldn’t be upset. Many, astoundingly, claimed the teacher didn’t even do blackface, because she had covered her entire body with dark brown paint, not just her face.

Blackface was and is historically used to dehumanize African Americans. The very term “Jim Crow” derives from an 1832 blackface minstrel character. These facts are easily found from a Google search, but commenters criticized people for being offended instead.

“I think the average American, especially a Republican, is so tired of hearing about racism…Some of the stuff that’s called racism is laughable to anybody with common sense,” Lyon County Republican Party chairman John Fluit told The Guardian.

A common complaint nowadays is that the racism charge is overused. People decry PC-culture and “special snowflakes” who think it’s wrong to imply immigrants at the southern border should be handled like livestock, as King has. Anything short of saying that people of color should die–even an action as overt as blackface–is not racism, and instead, “laughable to anybody with common sense.”

King made the race for Iowa’s 4th congressional district one of the most closely watched around the country. Now, people in and out of Iowa are calling his supporters racist. But it’s really not that simple.

There are two things going on here: a lot of Iowans don’t understand what racism is, but they also don’t care to learn. It’s important not to blanketly describe King’s supporters as racist, and acknowledge how our perceptions of injustice are shaped by our upbringings. But that’s not an excuse to shut down the concerns of our neighbors. We are all capable of empathy and listening to others’ experiences, even if we don’t immediately understand–regardless of color.