Key populous areas of Iowa aided in flipping Iowa’s 1st and 3rd districts Democratic, while Gov. Reynolds benefitted from the support of rural and western counties. 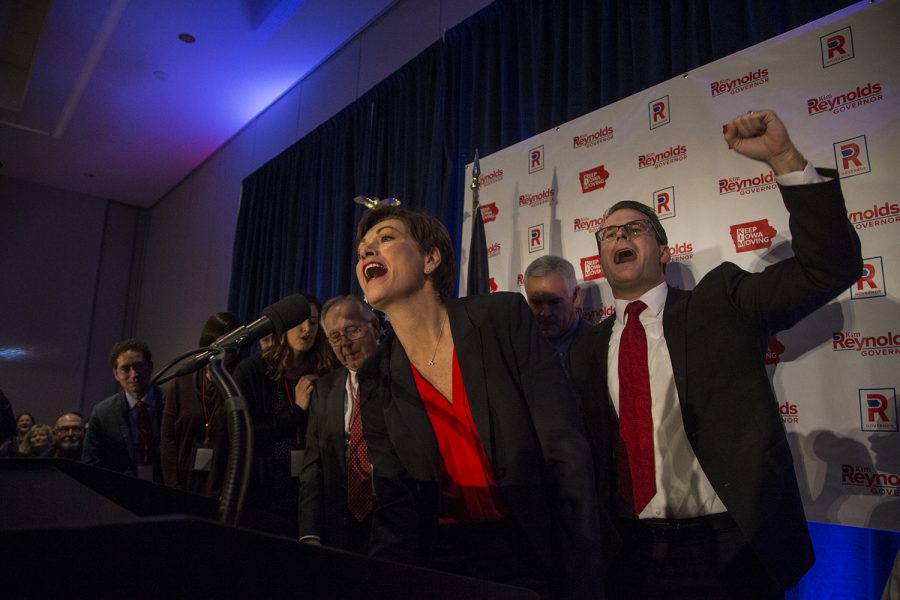 Gov. Kim Reynolds and Lt. Gov. Adam Gregg wave at the crowd at the Hilton in Des Moines on Wednesday, Nov. 7, 2018. Reynolds defeated her opponent, Democratic candidate Fred Hubbell in the race for Iowa governor.

Iowa re-established itself as a purple state Tuesday night after electing a Republican governor and flipping two congressional districts from red to blue.

Those results raise the question: Why did Iowa elect Democrats to Congress but not governor?

Reynolds will work with a Republican-controlled state House and Senate in January, continuing the Republican dominance in state government that voters ushered in with the 2016 election. Republicans in the Senate picked up three seats, and Democrats gained five in the House.

A variety of counties did not line up with one party. In some counties, both Reynolds and Democratic congressional candidates won majorities.

For example, Finkenauer won in Winneshiek County with 51.73 percent of the vote; Hubbell trailed Reynolds in the country by half a point.

University of Northern Iowa political-science Professor Christopher Larimer said the mixed Democrat and Republican results across the ballot resolidified Iowa as a purple state, and that likely resulted from a combination of factors.

“It’s hard for me to figure it out yet,” Larimer said. “I think what is clear is that Iowa is still very much a purple state. It’s capable of swinging back and forth.”

Independent voters composed a key voting bloc whose votes candidates aimed to lock in for the election. According to Iowa Secretary of State’s Office totals, no-party voters make up 35.8 percent of the state’s active electorate.

University of Iowa political science professor Tim Hagle said the generally moderate agendas of Finkenauer and Axne — who both campaigned on opening trade and encouraging job growth — possibly contributed to their ability to gather independent voters and secure the win.

Candidate supporters cite mixed-party voters, Trump’s popularity (or lack thereof), female candidates, geography, and a prosperous economy Reynolds as touted on the campaign trail as possible factors in Iowa’s midterms remaining mixed. Though one day after the elections, no one’s sure.

Stan Miller, 71, a Democrat from Johnson County, said he thought voters may have voted Democrat in Iowa Congressional races because of impatience with Trump.

“This election is very much about Trump and his enablers,” he said.

David Oman, former chief of staff to Branstad during his first reign in the ‘80s and ‘90s, said voters were more likely to cast a ballot in line with their pocketbooks. With a $127 million budget surplus for the GOP to boast of and unemployment below the national average at 2.5 percent in the state, Republicans had Iowa’s economic strength in their favor.

“The economy is strong in this nation and is certainly true in Iowa,” Oman said. “People have concerns whether they be healthcare, tariffs or others. Many are doing well, not all, and some would argue not enough, but people often vote with their pocketbooks.”

He also said since straight-party voting was eliminated in Iowa this year, more voters may have voted across party lines.

“People move around the ballot,” Oman said. “… You had to mark all of the offices, which probably prompted a few more people to hopscotch around.”