A project to bring internet access to students who need it is in its early stages. 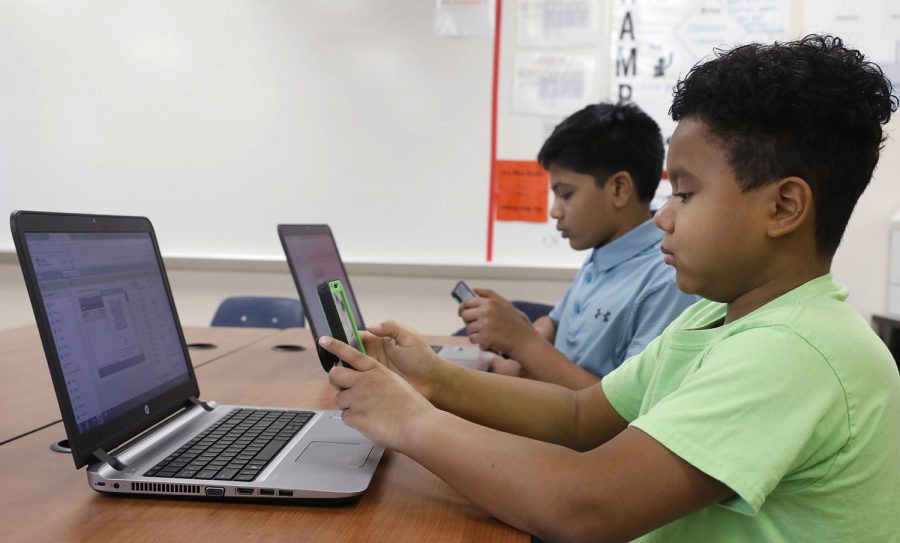 Sixth graders Hemant Pacha, left, 11, and Mikey Shands, 11, work on their phones and computers during a computer coding club gathering at Barbara Bush Middle School in Irving, Texas on Thursday, January 11, 2018. They both create an app for games and Mikey has his own YouTube channel. Hemant wants to be a doctor and a part-time video game designer and Mikey wants to be a cartoon animator. (David Woo/Dallas Morning News/TNS)

A group of Iowa City community organizers and activists is working to bring internet access to households without it in the Iowa City School District.

With the help of the School District’s Information Technology Department, the project used data from questionnaires given to families upon registration. Those questionnaires, which collected demographic information, showed that in some schools, around 20 percent of students were listed as having no internet access at home.

According to the Pew Research Center, 17 percent of U.S. teens say they are often or sometimes unable to complete their homework assignments because of lack of internet access.

“Our overall mission and overall drive is [giving] internet access to everyone regardless of their economic status,” said Chelsea Pfeiffer, one of the project’s leaders.

Zeru Peterson, one of the project volunteers with an IT background, said organizers were able to amend the questionnaires to ask about internet access.

“We coalesced around the idea that we want the project to be geared toward students,” Pfeiffer said. “The internet is a tool for education, and education is a human right, so that’s where we decided to take the direction of the project.”

The Community Internet Project ran field tests last week to flesh out the resources needed for such an undertaking.

Project member Bill Harshbarger said in an email to The Daily Iowan that the field tests consisted of testing out nodes for a mesh network. The network would have one internet access point, and the nodes would all connect to it and each other to form a mesh layout. According to the field test results, each node, costing around $100 apiece, covers a city block on average.

“We think the next steps will be to test more nodes once we can purchase some or get some donated and perhaps test with two internet sources to see if that is feasible,” Harshbarger said in the email to the DI. “Otherwise, I think we’re getting close to being ready to do a pilot project based on the anonymized data we received from our survey.”

Pfeiffer said the project has also met with members of the Iowa City Telecommunications Board to discuss the feasibility and logistics of the project.

The project is taking notes from other cities with community internet such as Oakland, California; Detroit; and, closer to home, Waterloo, Pfeiffer said.

In other countries, such as the United Kingdom, Spain, and Switzerland, the government works to ensure all people have internet access in what is called “broadband universal service.”

“I think most people in Iowa City recognize the importance of education, and they see internet access is necessary for that,” Peterson said.