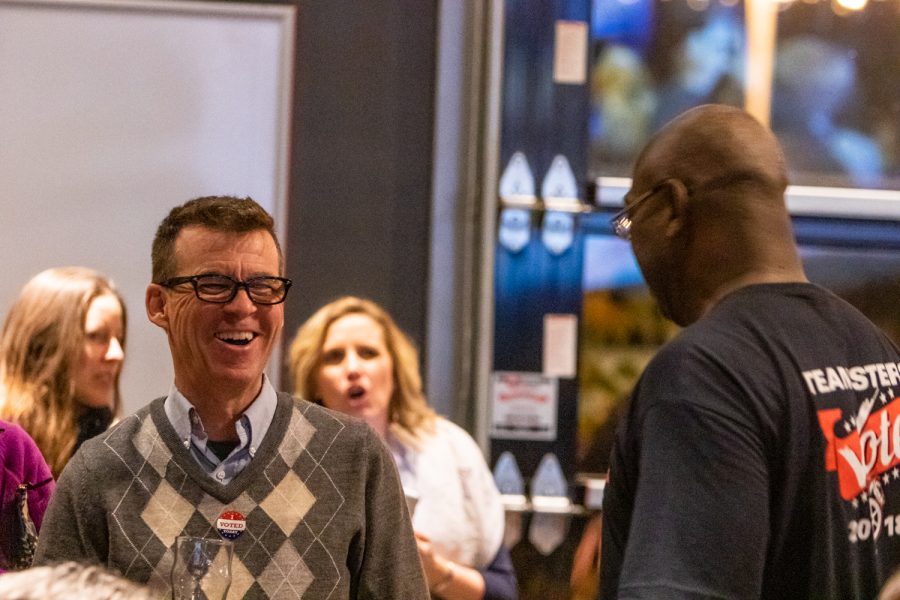 Bolkcom, who is currently serving his fifth term in the state Senate, ran on a campaign that focused on rebuilding the Democratic majority in the Senate.

“The last two years, for progressive Democrats, have been an absolute disaster,” Bolkcom said. “We need to re-focus and move forward.”

Before serving in the 43rd Senate District, Bolkcom spent six years on the Johnson County Board of Supervisors. Prior to that, he worked for three years at the Johnson County Public Health Department, where he focused on efforts to curb youth access to tobacco products.

Bolkcom ran unopposed in 2014 for his seat, which represents the majority of Iowa City as well as University Heights, East Lucas Township, and Hills.

Big Grove Brewery sounded more like Kinnick Stadium Tuesday night as Democrats from around Johnson County gathered to follow national and local elections. Supporters cheered as Bolkcom celebrated his victory, with 100 percent of precincts reporting at around 10 p.m.

During this term in the Senate, Bolkcom, the ranking member of the Senate Appropriations Committee, has previously told The Daily Iowan that increasing financial support for K-12 public schools, public universities, and community colleges is high on his list of goals.

“The last two years under Republican control have been the worst of the last 20 I’ve served, and I feel like it’s time to return this state back to the people and get back on track with supporting public education, supporting a stronger health-care system, and beginning to deal with environmental challenges,” Bolkcom previously said.

UI senior Wronkiewicz, a Marine Corps veteran, ran a campaign that focused on repealing the 21-ordinance (a city measure), which he called “misguided” and “unfair.” He was also vocal about marijuana reform in the state. Despite his loss, he thanked his supporters for all of their hard work at his watch party at Airliner.

“We’ll see,” Wronkiewicz said on if he’ll run again. “If the opportunity presents itself I might, but I’m focused on graduating right now – I had a fun time, and I’m still waiting on the statewide races to come in.”

Looking forward, Bolkcom said there are a number of challenges he would like to address.

“I think we really need to get back on track in terms of higher education funding,” Bolkcom said. “The last eight years have been some of the worst I’ve seen for funding for our higher education institutions.”

Hunter Staszak, the president of University of Iowa Democrats, said he was glad to see Bolkcom retain his seat.

“I think Joe has a steady hand. He knows the ropes of the Iowa legislature, and he knows what students need – he’s been an ardent supporter of higher education, and I think we’ll see that continue in the future,” Staszak said.