After realizing no women’s basketball club already existed at a large school like the UI, a sophomore set out to establish one for girls who want to compete but not on the college level. 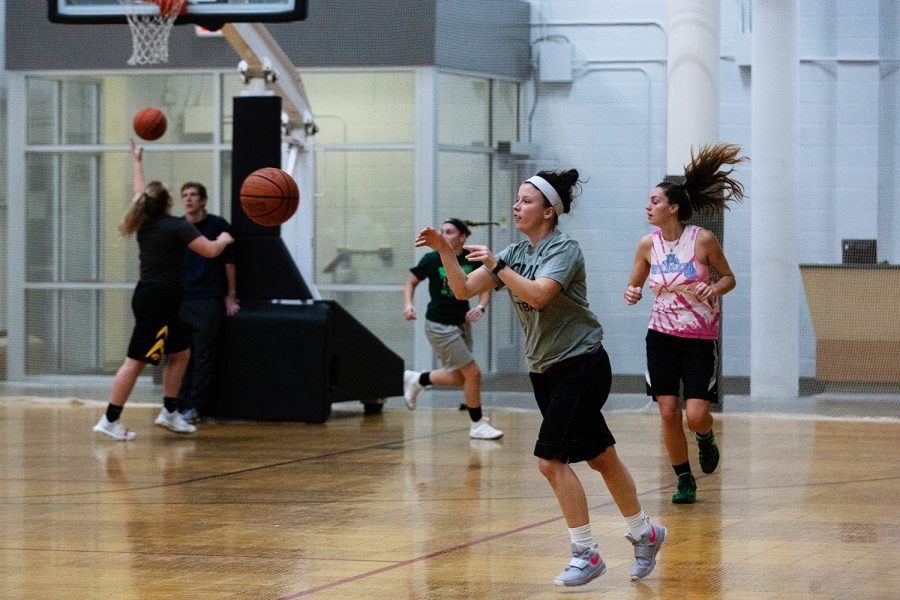 Members of the Iowa Women's Club Basketball team practice at the field house on Oct. 29, 2018. The club, in its first year is preparing for a tournament in December.

Golf, rugby, and quidditch — these are just a few of the numerous sports clubs available through the University of Iowa Recreational Services. Students can play, coach, or lead in many sports, but until recently, shooting hoops wasn’t an option.

Sophomore Sarah Welsh didn’t want to play college basketball, but she didn’t want to give the sport up, either. When she realized there was no basketball club at Sports Programs, she decided to establish one herself.

“No one ever took the initiative,” Welsh said. “I never thought I’d be that person, but I’m glad I did.”

Welsh met with sports clubs advisers, sent out a mass email, held an interest meeting, conducted tryouts, and finally had her team.

“After seeing everyone’s talent, it was hard to make cuts,” Welsh said. “So we got two teams of 13. I think the girls were pretty excited about that.”

As president of the club’s executive board, Welsh is responsible for coordinating such items as tournaments, while two coaches oversee the A and B teams.

“Leading is super new to me,” Welsh said. “I’m definitely more of a team player.”

Welsh, who transferred here from the University of Missouri, tried intramural basketball but missed the competition and travel that comes in sports clubs. Now, the teams will travel to Iowa State in December for their first tournament.

RELATED: Hegde: Getting involved on campus is vital

“Our first practice, and it was like a flashback to high school,” Welsh said. “You could tell everyone had played their whole lives and was excited to be back in the gym.”

Because sports clubs do not receive university funding until their second year, Welsh said, the team functions on a self-sustained budget, comprising tryout fees and member dues.

Sports Programs Assistant Director Shannon Tumelty said other requirements include that the team has at least 10 members and represents UI at competitions outside  Johnson County.

“Essentially, it’s based on student interest,” Tumelty said. “We definitely give them the resources, knowledge, and experience to be successful.”

As a former club athlete herself, Tumelty was also surprised to realize that no club basketball club existed. Welsh was the first to go through the process of registering for a student organization and meeting with Recreational Services.

“Sport clubs are an opportunity for students to be leaders and compete in the sport they love,” Tumelty said. “It usually takes just that one person reaching out.”

Tumelty emphasized that the club’s exposure to tournaments will show Sports Programs that those interested can maintain membership and be successful.

Freshman Lindsey LaBorde said the women’s basketball club is very competitive, and she hopes people will see that and want to join so it continues to grow.

“Basketball is something that’s been a huge part of my life as long as I can remember,” LaBorde said. “It’s really awesome to see these girls from different backgrounds coming together with a mutual love for this sport.”

After such an unexpected turnout at tryouts, LaBorde said, she and her teammates have bonded on and off the court to make the club more successful.

“It’s been amazing so far,” LaBorde said. “I don’t know if Sarah expected that many girls, but it’s really neat that they’re not only my teammates but my friends.”