The University of Iowa is hosting a full week of events focused on celebrating and raising awareness of first-generation students and their successes. 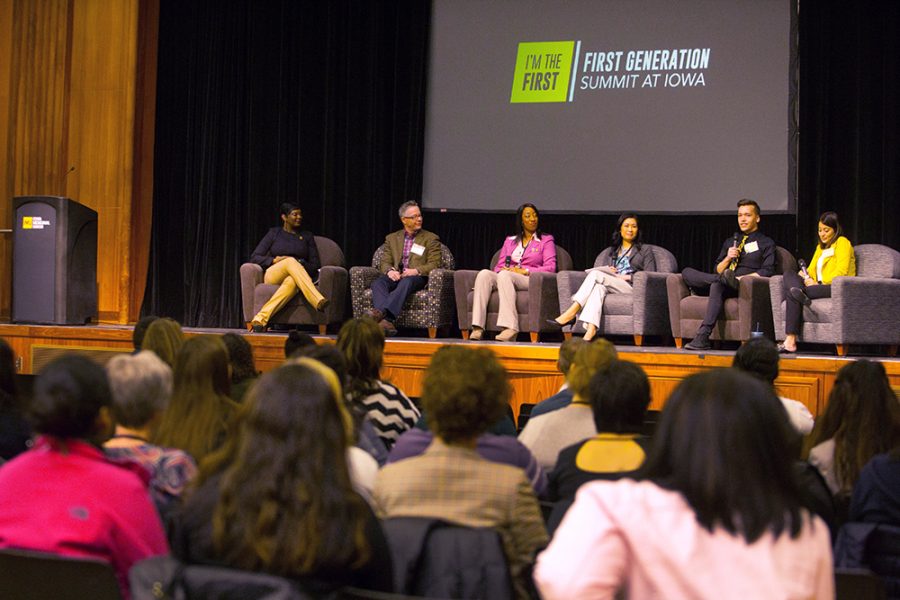 The University of Iowa is participating in the National First-Generation College Celebration for the first time this year from today through Friday, celebrating with an entire week of events planned in part by the First-Generation Task Force.

UI colleges, campus organizations, faculty and staff, and other programs will participate in the week, hosting panels, screenings, and several informational sessions to help spread awareness and celebrate first-generation students — a population that makes up nearly a quarter of undergraduate students at the UI, President Bruce Harreld said.

“We value our first-generation students very highly, and we are proud to celebrate their accomplishments,” he said.

The celebration week is a campus-wide initiative brought to the UI’s attention by the First-Generation Task Force, a group convened in 2017 to support first-gen students.

Angela Lamb, a specialist in Student Success Initiatives in the University College and a member of the task force, said the group had no problem piquing the interest of UI leaders about participating in the national celebration.

“I am absolutely amazed and humbled by the amount of support that we’ve had from campus,” she said. “We have not had any problems getting anyone to want to participate. They found out about it and wanted to do it.”

Senior and first-generation student Tristan Schmidt helped plan the first First-Generation Summit last spring, an event led by UISG to increase awareness and understanding of what it means to be a first-generation student. He said he believes the summit acted as a kind of steppingstone for what the university is doing to recognize those students now.

Schmidt will host a First-Gen Latinx Panel and Social on Tuesday as part of the week’s events.

He said that although all first-gen students have different pasts and experiences, his transition to the university as the first of his family to attend college definitely faced challenges.

Results of Provost Office Director of Assessment Wayne Jacobson’s survey would suggest that Schmidt’s particular experience is not unusual for first-generation students. The most recent survey, taken by first-gen students last spring, gathered institutional data about all aspects of a students’ experience on campus.

While Jacobson said results of overall satisfaction with classes and interaction with faculty was about the same between first-generation and other UI students, differences emerge when it comes to involvement outside of class and retention rates.

“The biggest difference that shows up in the survey is how many hours a week [first-gen students] work and how much more likely they are to report financial concern,” he said.

According to the survey, first-generation students report lower levels of comfort in being able to ask for help when it comes to their academic course work.

While acknowledging the challenges, Lamb said, she believes the university and the Task Force have taken huge steps toward raising awareness and increasing support for students.

“There are a lot of institutions that are struggling to even get their campus leaders to acknowledge that first-generation is a thing,” she said. “The University of Iowa is way ahead of that. Not only do we have faculty, staff, and students who are interested in better supporter first-generation students — our leaders are.”