From Iowa City to El Paso: The Wave goes nationwide

After being inspired by the UI’s tradition, Jefferson High School in El Paso, Texas waves to children at the El Paso Children’s Hospital after the first quarter of every home football game. They call it “Wave of Love.” 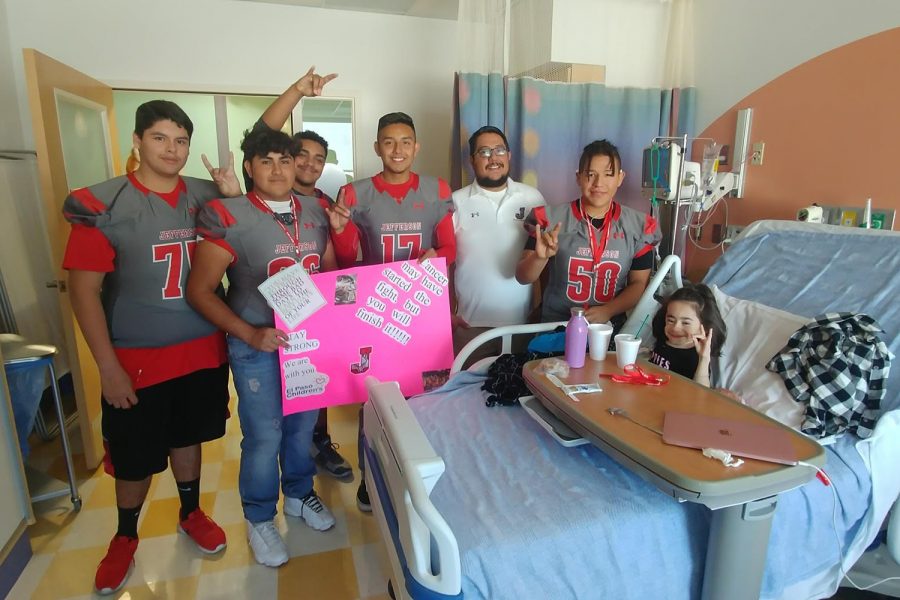 Looking out the window of his daughter’s hospital room at El Paso Children’s Hospital, Jesse Tovar saw nothing but traffic. One day, he ventured to the other side of the hospital wing to see Jefferson High School’s football field not far below. That’s when Tovar was reminded, he said, of the Hawkeyes’ famous Wave.

About a year later, Tovar sat and ate lunch with friend Ed Stansbury. They were talking about the upcoming football season and what it may have in store for local high schools. That’s when Tovar remembered Jefferson and the Children’s Hospital, he said.

Stansbury and Tovar began throwing ideas back and forth, and Stansbury contacted people he knew at El Paso Children’s Hospital.

Tovar reached out to an old friend of his, Jefferson High School’s head football coach, Tony Martinez. As soon as Tovar described the idea, he was on board, Martinez said.

RELATED: Watching the Hawks play from the 12th floor of the UI Children’s Hospital

An avid college football fanatic, Martinez was familiar with the Hawkeye Wave. He had noticed the proximity of the hospital before, but the idea had never crossed his mind, Martinez said. “Wave of Love” was born on Sept. 28 after the first quarter of Jefferson High’s varsity game.

“I loved the idea. Our kids are from a very poor community, but they are compassionate about the situation,” Martinez said. “They understand that though they might have a tough situation at home; they don’t have it quite as bad as the kids up there fighting for their lives. It’s brought a sense of awareness.”

Both home and opposing football teams, cheerleaders, coaches, and fans walk together to the side of the stadium most visible to the children at the Children’s Hospital to wave at every home game, Tovar said.

“Easily, this is the most ‘impactful’ event to be a part of,” Stansbury said. “To be standing on the field, to start seeing the silhouettes of the kids, parents, and staff at the hospital is a tear jerker. I am so proud and happy to be a part of this.”

Before their last home game on Nov. 2, the football team got the opportunity to visit the children they had been waving to from the field. Players made posters, and hospital employees organized a plan for the students to greet sick patients.

“To be able to have the team there, and walk the halls, and see the rooms that the kids, and families, and staff stand in and look down to do the wave, it comes full-circle,” Stansbury said. “You could see it in the faces of the Jefferson football team how special it was.”

Martinez foresees the wave carrying on for seasons to come, he said.

“Wave of Love” has extended passed just Jefferson High’s community. People from all over the city who have no affiliation with the team are coming to the game just to experience what it’s like to wave to the children, Tovar said.

“I would just like to thank the University of Iowa for inspiring us to do such a neat thing,” Martinez said. “It really has humbled our kids, and they really look forward to doing it. We haven’t had a very successful season, but this has made it all worthwhile to [the team].”