A.J. Epenesa could’ve gone to any school in the country, but his upbringing taught him the importance of family. 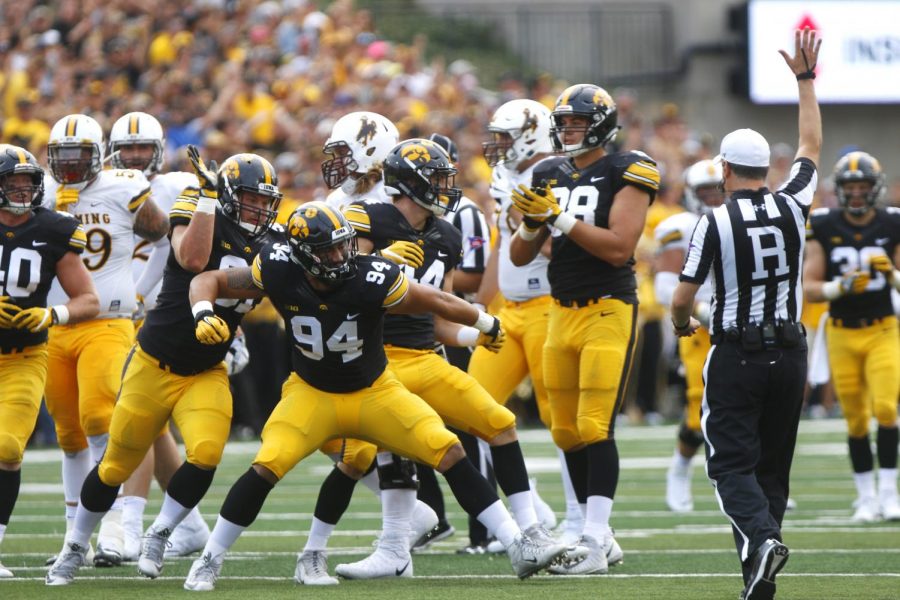 On the final day of the Illinois High School Athletic Association All-State discus competition, A.J. Epenesa was in third place after a rough tournament. He had just one throw left to defend his title from the season before, in which he had set numerous state records.

Just before the final throw, his brother walked up to him and asked him, “A.J., are you winning?” Epenesa replied simply, “Not yet.”

“Most people would feel the pressure [in that situation],” Epenesa’s high-school football and discus coach Matt Martin said. “He’s the defending champ sitting in third place, and things aren’t going well. [Yet] he was so confident in himself.”

Epenesa’s unwavering confidence followed from the track circuit all the way to Kinnick.

He arrived in Iowa City in the summer of 2017 as one of the highest-rated recruits in program history, with enormous expectations on his shoulders.

And, just as he did in his senior year’s discus competition, he has lived up to the hype with a calm confidence.

In Epenesa’s first year, he saw limited action in all 13 games, but he was able to rack up 4.5 sacks and forced a fumble.

Oh, and he’s not a starter. Thanks to Iowa’s depth on the defensive line, Epenesa is a backup, but you wouldn’t be able to tell by just looking at his sack count.

“The way he’s been working is really good,” defensive coordinator Phil Parker said. “The way we’re handling the situation is that 25-26 reps a game has really been his potential to make some big plays.”

Not only has he been productive statistically, but his big plays have come in some crucial situations. Two of his sacks have come in the fourth quarter, including one during the Iowa State game that resulted in a game-sealing fumble.

What is perhaps most impressive about Epenesa’s sophomore campaign is that his increased production has come with just a slight uptick in his snap count.

“Last year, he was learning how to play,” head coach Kirk Ferentz said. “He was trying to do too much last year, but I think he’s starting to find a little bit of a groove in the pass-rush sense.”

However, Epenesa’s personal success is a secondary concern; he’s more in tune with how he can help boost the team.

There certainly is no shortage of publicity surrounding the 6-5, 277-pound sophomore; talk of Big Ten defensive player of the year and possible big-time NFL player in his future is common.

Yet none of that would come up when talking to him. Epenesa likes to talk about the potential of his team rather than his own. His team-oriented nature started back home in Edwardsville, Illinois, with his parents’ family-first attitude.

With everything Epenesa did as a touted prospect in high school, his parents made sure the community was involved.

After each and every home game, Epenesa’s parents would throw a barbecue for the whole community.

“It’s not uncommon to see 100 to 150 people in their backyard,” Martin said. “They cook for everybody. It’s one of the most unselfish and community-type acts that I’ve ever been around.”

It’s a ritual that continues to this day, with Epenesa’s brother Eric at Edwardsville High.

“Before everybody eats, everybody gets in a big circle and holds hands, and A.J.’s dad will talk about the team and about all the boys, then he’ll do a prayer,” Martin said.

Even when Epenesa toured the country as he was being recruited, his family made sure it was about more than just him.

“If A.J. went to visit a school, [his parents] always took two or three of A.J.’s friends with them,” Martin said. “They’ve used their son’s exposure to give other kids exposure or experience they wouldn’t otherwise have.

“It’s never just about their son, it was about using their son to benefit Tiger football and help out other kids. They got the bigger picture. They’ve always used their son’s gifts to help other kids.”

The Epenesa’s family mentality certainly had an effect on A.J., and that was a major factor in his choice of a college-football family.

With family being such a huge part of Epenesa’s high-school experience, it was only natural for him to look for more of the same at the next level.

There was no shortage of options for Epenesa; blueblood names such as Alabama, Michigan, and Ohio State all came knocking. Yet it was Iowa — a school not known for its ability to recruit highly touted prospects — that came away with the Epenesa sweepstakes.

Alabama could show off all the trophies it wanted, but that didn’t matter to Epenesa; he was looking for a home.

“If you know anything about A.J. he’s very family-oriented,” Martin said. “It means a lot. I think deep down in his heart, Iowa always felt like family.”

Of course, it didn’t hurt that his father, Eppy Epenesa, also played football for Iowa during the Hayden Fry era.

“He was a big influence,” A.J. Epenesa said. “I have a connection here. I’ve always loved the Hawkeyes since I was young, and being able to come here was a dream come true.”

Epenesa came to Iowa joining a defensive line that was stacked with veterans. Three of this year’s starters are seniors, and the other is a junior.

Together, they have combined to be one of the better defensive lines in the country, and a major part of that has been the team-first attitude that they have embraced.

“We’re all a really close-knit group,” Epenesa said. “We all hang out together, we go out to eat together, we have a really good time. Those are my brothers, so I’m happy to be with them.”

That type of approach is why Epenesa wasn’t fazed when he wasn’t listed as a starter to start the season. Instead of taking his backup position as a slight, he took it as an opportunity to get better.

“Coming [to Iowa] kind of humbles you to realize that there are guys who are just as good as you who didn’t get ranked like I got ranked,” Epenesa said. “I’m working my way up the ladder right now, and I just got to keep my nose to the grindstone.”

Right after fans got word in March that Parker Hesse would start instead of Epenesa, all the clichés about son’s mirroring their fathers got more credence when Epenesa’s father took to Facebook to defend the decision.

“Parker Hesse is a good kid from a great family & amazing teammate to A.J.,” Eppy Epenesa said in a Facebook post. “[Hesse] is a monster of a football player! A.J. Epenesa is still learning & Parker is a great person to learn from!”

That kind of humility that both Epenesa and his family displayed during his short time at Iowa has earned the sophomore a lot of respect from his veteran teammates.

“He’s just a good kid,” senior defensive lineman Sam Brincks said. “I think sometimes when you see those big recruits come in, they expect a lot, and he’s not that way at all.”

Instead of worrying how many times he gets in the game on Saturdays, Epenesa spends his time throughout the week focusing on improving.