The real-life terror of sleep paralysis

Sleep paralysis, while rare, can prove terrifying for those who experience it. 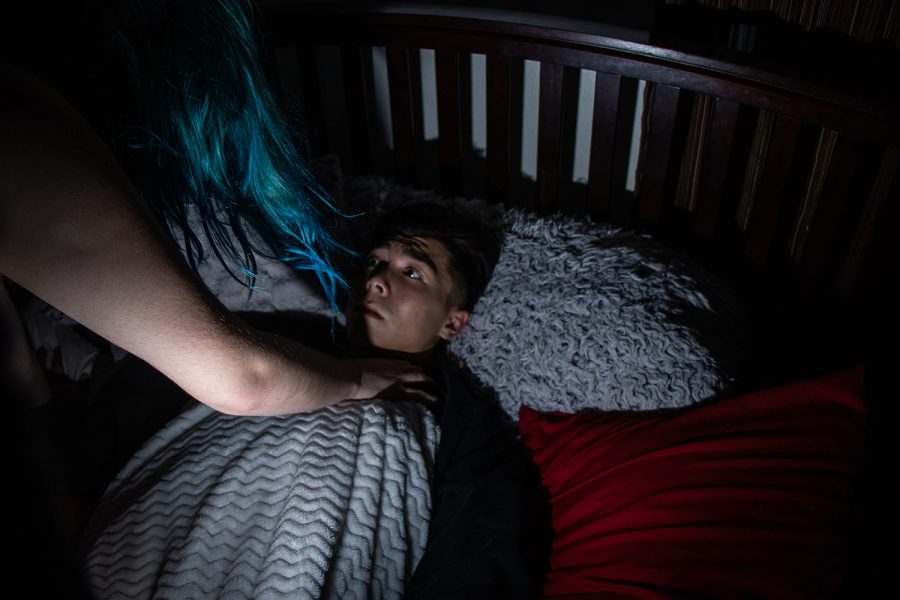 “That night, I was lying in bed, so I opened my eyes. I could kind of see like a cloud in the corner of my room. Out of the corner of my eye, it formed a face,” University of Iowa student Abby Dickson, who is studying global health with a minor in communication, said. “I didn’t really acknowledge it or anything, and I couldn’t move. It formed a face. And it moved closer to me. I remember it was right next to my face. And then I woke up crying, freaking out.”

The cause of Dickson’s distress was sleep paralysis, a rare disorder in which people “awake,” meaning they are conscious of their surroundings, but unable to move. While sleep paralysis is not a typical experience for most, it can be very memorable for those who experience it.

“I felt really afraid for no reason. I tried to get out of my bed, and it felt like all of my limbs were being weighed down by something really, really heavy,” UI student Taylor DeMello said. “There was a kind of music in the background, and the edges of my vision were fuzzy and wavy.”

Clinical Assistant Professor Alex Iannone, a pulmonary, pediatrics, and sleep doctor at the UI Sleep Clinic, describes sleep paralysis among other sleep disorders in an emerging field of medicine that is often overlooked — sleep.

“Sleep paralysis is an overlapping of the sleep states, it’s when your REM sleep crosses over with being awake,” Iannone said. “All of your muscles are inhibited except for your eyes and your diaphragm, which is used to breathe.”

REM sleep, a stage in a normal cycle of sleep, is when the brain becomes most active. In this phase, individuals dream vividly and have low muscle tone. The brain prevents the body from acting out their dreams so that physical harm does not get induced in real time.

Iannone said people should not worry, because sleep paralysis is rare.

“It’s something that can happen once or twice in a person’s life and be totally normal,” she said. “Up to 50 percent of people have it, and it doesn’t recur. It can be a one-time thing.”

If it does happen to recur, however, she said, people should start looking into other sleep disorders, habits, or even genetic ties.

“It could be a small symptom of possible narcolepsy, or it can actually be a genetic thing,” Iannone said. “There’s familial sleep paralysis that you can get. Like with a lot of sleep disorders, they’re finding genetic ties.”

“I talked to my friends, and none of them can remember specific instances. People in my family have, though,” DeMello said. “My mom has experienced really intense and terrifying sleep paralysis, and my little brother more so.”

Poor sleep also affects mental states while awake, and mental illness can affect the amount of sleep an individual gets.

“Somebody could have depression. A symptom of untreated depression could be you have insomnia or you’re sleeping too much, and so that could be due to the depression,” Iannone said. “Poor sleep and insomnia overnight can result in depression and bad mood during the day, so you have to figure out what is the chicken and the egg.”