Dungeons & Dragons, a world of improv, creativity, and solving problems.

Dungeons & Dragons is a widely popular tabletop roleplaying game. But what really makes it unique is the storytelling. 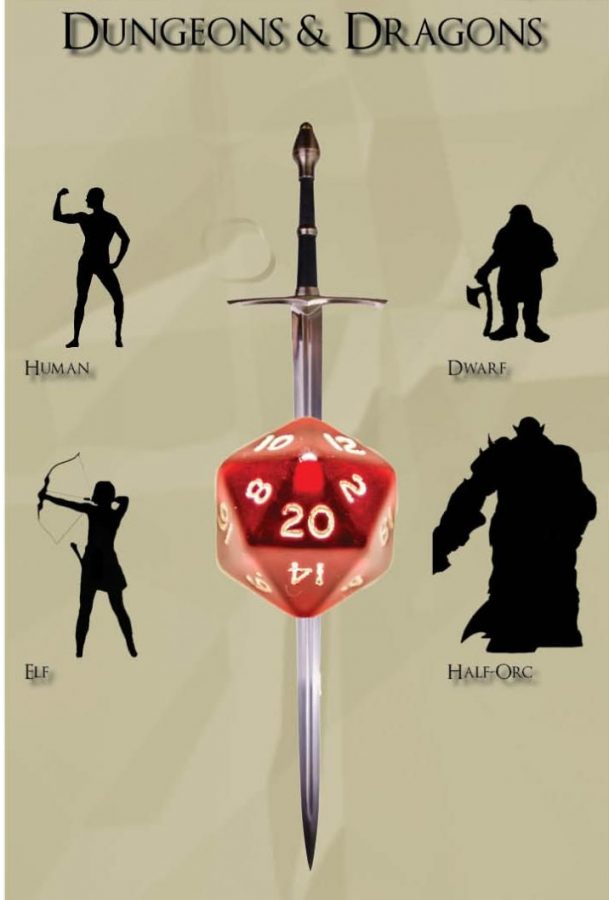 A custom-made, cherry-wood stained table dominated the room. The center of the table was littered with dice, sheets with numbers and drawings, and a tiled whiteboard. A caged, low-hanging light gleamed off figurines on a bookshelf; maps and posters of distant worlds and monsters clung to the walls.

An exploration into a magical world was set to begin; University of Iowa junior Acadia Floyd was the host for a Dungeons and Dragons session with her boyfriend, Max Riley.

Dungeons and Dragons, or D&D, is a tabletop, role-playing game set in a fantasy world that relies heavily on storytelling. According to the official D&D website, the game began in 1974, after two gamers, Gary Gygax and Dave Arneson, met and decided to collaborate on the creation of the first few drafts of D&D.

D&D recently had its best sales year yet in 2017, according to SYFY WIRE, with over 8.6 million Americans playing the game. Streaming services such as Twitch allow fans of the game to watch livestreams of D&D games being played and further connect the community.

The game begins with each person creating a hero, picking a race (the creature representing the person), and a class (what the creature does). Each player has a character sheet that contains attributes of the hero, items gathered during the journey, and an extensive background that holds vices and secrets that the hero (or villain) may have.

Along with the typical players, there’s another individual called the Dungeon Master.

The story that they’re currently playing in D&D, crafted by Floyd, is called Chaos. Floyd and Riley play Dungeons and Dragons with their friends at least once a week at their apartment. Floyd said Chaos was one of their main sessions, and they have played it for two years.

“We’re out to save the world from a rampaging god,” UI student Marcus Pixley said. “I’m a character from a different dimension. They’re currently trying to stop a dimension from collapsing in on itself, because there’s someone that we need in there.”

Because the gameplay reflects a storyline, no two sessions are the same. Additionally, there are endless potential stories that players can explore. While there are certain worlds and conflicts that D&D offers for players through books and game guides, the improvisational nature of the game allows for anything to happen.

“It’s a very bonding experience,” Riley said. “You don’t just replay a session. You don’t — it’s gone. That’s it. You had that moment, you had that story, and no one will ever experience it again. The only time you’ll ever hear of it again is if someone [in the group] brings it up.”

While typical board or card games do not usually last for more than an hour or two, D&D sessions can be as short as two hours to as long as 12.

“My very first session I ever played, we got to my best friend’s house at 5,” Floyd said. “We made all of our characters, sat in the living room and played. We planned to play until 10, and we stayed up the entire night because everyone was so excited. We literally played from 5 p.m. to 8 a.m. Then we went and got doughnuts, and all went to bed at around 9.”

Floyd initially got Riley into the game when they starting dating.

“Six months into our relationship, she asked if I had ever played,” Riley said. “I said no, but I said sure, I’m interested. So I did what every person does when they start playing Dungeons and Dragons. They make a stupid character. So I made a dwarf called Arnold Schwarzenegger.”

“I was kind of skeptical about Call of Cthulhu because it was not high fantasy,” Pixley said. “But two of my other roommates were doing it, and we were all very close, so I was like, Sure, why not? And I loved it. We were hooked.”

In order for the role-playing games to work, both the players and the Dungeon Master have to put forth the effort to make the story engaging.

Besides the Dungeon Master guiding the group, players are left to their own devices.

“You’re improvising most things,” Pixley said. “There’s a lot of group work involved, which I love.”

Riley said creativity is key in the game, and because it is up to the players, the game doesn’t get boring.

“The most important attribute to the player is being creative,” Floyd said. “Even if you’re not creative in the sense of character creation or world-building, you can be creative with tactics, strategy, problem-solving.”

By diving deep into the depths of imagination, the game, represented in real life by just a map and small figurines, can really come alive.

“If you like D&D, you have to imagine, like, really well,” Riley said. “Because if you aren’t imagining, you’re just staring at a board with dice. That’s really boring. You have to be able to picture everything in your own way.”