UI students supporting Democratic candidate for governor Fred Hubbell discuss why they believe he is the best candidate for the job. 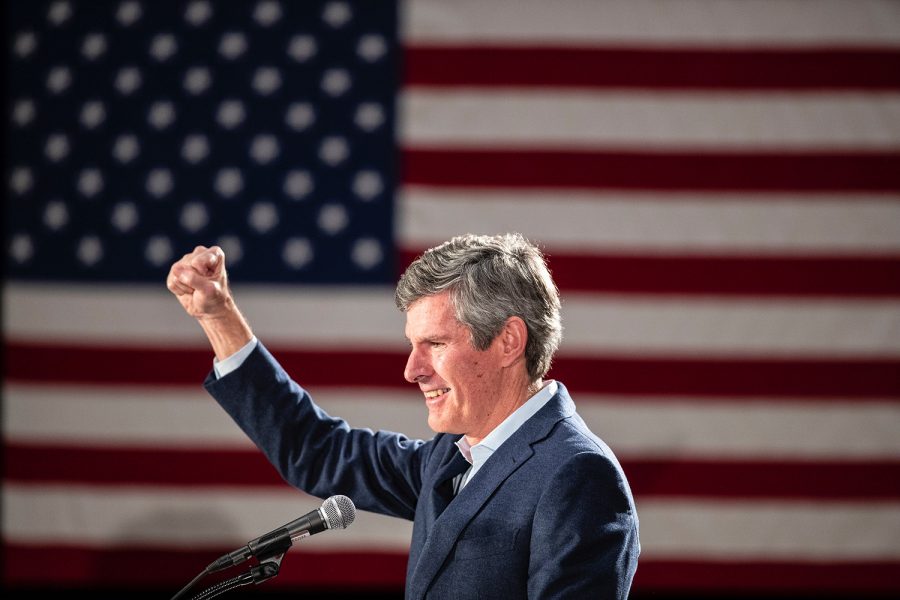 On the lawn of a Democratic organizer’s house in Iowa City, a party activist gathered a group of roughly 30 canvassers and launched into his story of graduating with a six-figure debt.

The group gasped, and several shook their heads. Iowa’s Democratic candidate for governor, Fred Hubbell, spoke next — softly but firmly, pledging his administration would balance a budget that favored education and reversed privatized Medicaid. He patiently rattled off numbers and statistics.

In a competitive race for Iowa’s top executive, Hubbell has emphasized policy changes, especially in the areas of education and health care.

The first time University of Iowa junior Charlotte Gude, a member of University Democrats, saw him campaign was months earlier at his regional office in Iowa City. She said she was impressed by his calm demeanor.

“The way that he spoke, he was logical, he made sense,” she said. “His policies seemed as if they would work — they fit with where the problems are. He gave off vibes of being very cool, calm, and collected but also passionate about what he was doing.”

Hubbell launched his campaign on July 24, 2017, in what shaped up to be a crowded Democratic primary. He easily won the field with 54.3 percent of the vote, around 34 percentage points more than the runner-up.

Who is Fred Hubbell?

As a first-time political candidate, he highlights his experience managing businesses and leading public entities as a signal he can balance the state’s budget while returning money to finance health-care options and increase funding for public universities and community colleges.

Hubbell, 67, is running against incumbent Republican Gov. Kim Reynolds in one of the most expensive gubernatorial races in Iowa history.

Hubbell cites an incident that occurred more than 30 years ago as a turning point in his life. In 1981, Hubbell and his wife were held hostage at gunpoint on a hijacked plane for several days. He resolved that if he made it out alive, he would dedicate his life to helping others.

“I sat there, I prayed, I thought about what I would do differently if I got a second chance. Since then, I wake up most mornings remembering that event and also feel motivated to make our state the best place it can be,” he said during the last gubernatorial debate, Oct. 21.

At the time, Hubbell was a lawyer in New York City. Soon after the plane incident, Hubbell and his wife returned to Iowa. There, he began leading various nonprofits and philanthropic boards and organizations.

He and his wife Charlotte, whom he met while studying law at the UI, now live in Des Moines. The couple have three grown children and three grandchildren.

In 2009 then-Gov. Chet Culver appointed Hubbell to be the director of the Department of Economic Development. Additionally, Hubbell chaired the Iowa Power Fund from 2007 to 2010.

He has served on a laundry list of nonprofits and philanthropic organizations.  He was a member of the Mercy Hospital Medical Center Board of Trustees and Planned Parenthood in the mid-80s and chaired the United Negro College Foundation in 1988 and the Iowa College Foundation Board from 1995 to 1996.

UI freshman Nick Pryor, a volunteer for the Zach Wahls campaign, said he hopes a future governor would take steps to decrease the cost of attending a postsecondary school.

“A big priority for me is cost of education here at the University of Iowa along with other postsecondary schools,” Pryor said. “Bringing down the cost for people whether you’re at a four-year institution or a two-year college like Kirkwood here in Iowa.”

In 2018, the Legislature passed $35.5 million in budget cuts to Iowa’s multibillion-dollar budget. One-third fell on the UI and Iowa State University.

Hubbell has focused a significant portion of his campaign on what he sees as injustices resulting from the decision to delegate Medicaid patient insurance decisions to private companies.

At a campaign event Oct. 27, UI student Lee Sailor, 26, said he was “pleasantly surprised” by Hubbell; he had voted for John Norris in the Democratic primary in June.

He said he stood firmly with Hubbell because of his aggressive stance to return Medicaid decision-making to the state government. Sailor is one of approximately 680,000 Iowans insured by the state’s Medicaid system, which primarily serves people with disabilities and low-income individuals. In 2017, the state began relegating patient decisions to for-profit insurance companies.

His experience as a board member of Planned Parenthood of Mid-Iowa is what appealed to Gude.

Reynolds signed the “fetal-heartbeat” bill passed this year by the Iowa Legislature. The bill, which is currently on hold because of pending litigation, would ban abortions as soon as six weeks into a pregnancy.

Hubbell has criticized what he calls wasteful tax incentives to corporations. He points to the Board of Iowa Economic Development Authority’s approval of $20 million in tax incentives to attract tech-giant Apple to Waukee as an example.

Instead, Hubbell says, the dollars used to attract Apple could be used to fund mental-health initiatives, job-training programs, and a Medicaid transition.

“The reality is we can fix Medicaid and stop this privatization disaster without raising taxes,” Hubbell said at a campaign stop in Iowa City on Oct. 27.

Republicans argue the state is on track economically, with a second-in-the nation low unemployment rate and a $127 million budget surplus. Reynolds has also taken to the campaign trail to say Hubbell wants to raise taxes to pay for new initiatives.