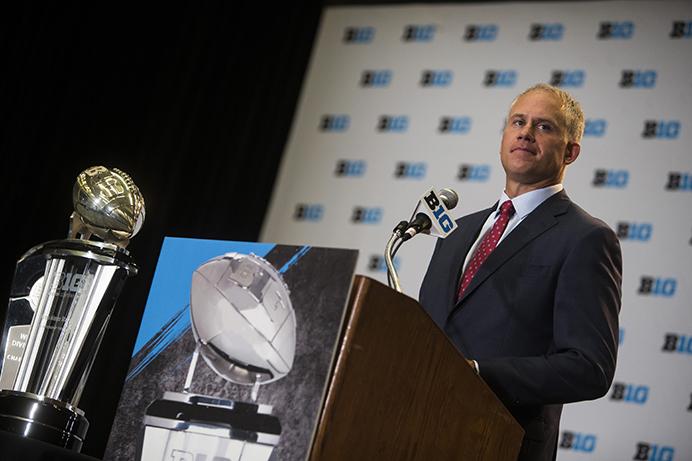 Between D.J. Durkin and Urban Meyer, the Big Ten spotlight continues to be on head coaches 10 weeks into the season.

Tuesday was a busy day, with press conferences and announcements on Maryland’s investigation into its athletics administration and the football program. Also on Tuesday, Urban Meyer spoke on the health issues and pain that can often be seen on the sidelines.

D.J. Durkin expected to be reinstated

The Maryland Board of Regents recommended on Tuesday that Maryland head football coach Durkin be reinstated following an investigation into the nature of Maryland football and the death of Jordan McNair on June 13.

The regents accepted the findings of the investigation, including the fault of Durkin and other administrators for allowing strength and conditioning practices and continual problems in the football program.

“During football coach D.J. Durkin’s tenure, the Athletics Department lacked a culture of accountability, did not provide accurate oversight of the football program, and failed to provide Mr. Durkin with the tools, resources, and guidance necessary to support and educate a first-time head coach in a major football conference,” Regent Chairman Jim Brady said during the press conference.

The investigation also found no connection between administrative problems and McNair’s death.

Durkin has been on administrative leave since Aug. 11 after it was found he was present at the practice that ultimately killed McNair. Maryland Athletics Director Damon Evans has also been on leave and is expected to be reinstated.

The regents also announced that Maryland President Wallace Loh will retire in June 2019.

RELATED: Iowa’s offense attempts to step up in close

Maryland will face Michigan State on Saturday, and Durkin will be on the sidelines.

How much longer will Urban Meyer’s coaching career last?

Ohio State head coach Urban Meyer opened up about his ongoing health issues, sparking questions to how long his tenure in college football will last.

On Oct. 6, Meyer had to kneel due to pain during a game against Indiana. He now has announced that he experiences severe head pain because of a brain cyst. He had brain surgery in 2014 and is now being monitored.

In Meyer’s weekly press conference on Monday, he addressed rumors of retirement following this season.

“I plan on coaching,” he said.

He also confirmed that he will continue his reign as head coach at Ohio State in the 2019 season.

The pain he experiences on the sidelines can be seen in his facial expressions when a headache comes on.

“I love Ohio State, I love our players, so the issue, I don’t want people to worry about me,” Meyer said. “I want to make sure we’re getting some things right around here, and that is what the effort is. That is 100 percent of what my focus is on.”