Biden in Cedar Rapids: Leaders need to ‘set the tone and dial down the temperature’ 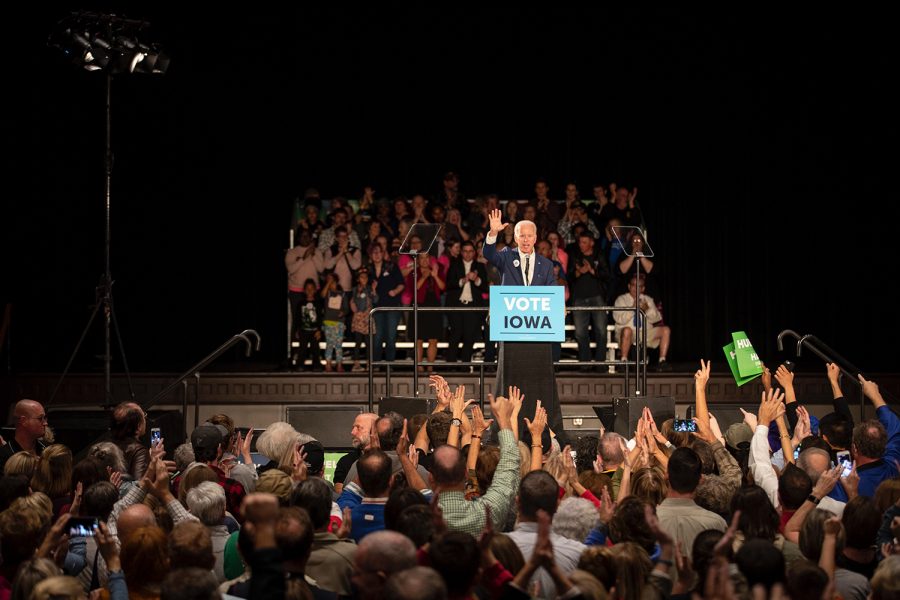 Former Democratic Vice President Joe Biden told a crowd of Iowa Democrats to look for candidates with character who are willing to accept citizens with diverse backgrounds.

A week out from Election Day, Biden campaigned with Iowa Democrats in Cedar Rapids at a rally for early voting with Abby Finkenauer, candidate for Iowa’s 1st Congressional District, and gubernatorial candidate Fred Hubbell.

Biden said that over the last couple weeks, terror and hate have been prevalent in the political sphere. On Oct. 29, a shooter killed 11 in a Jewish synagogue. Over the last week, several prominent Trump critics received bombs in the mail including former President Barack Obama.

Democrats and independents alike are looking for candidates with character, Biden said, and for people to tell the truth.

“It’s our leaders who need to set the tone and dial down the temperature,” Biden said.

“Silence is complicity, and folks, we will not be silent,” Biden said.

Biden called it “unconstitutional” to implement a new health-care plan without recognizing someone’s pre-existing conditions, which he said Republicans in office are trying to do by attempting to repeal the Affordable Care Act. Congress made an unsuccessful attempt to “skinny repeal” the Obama-era legislation in 2017.

“The only candidates in this race who are actually going to protect your pre-existing conditions are Fred Hubbell, Rita Hart, and Abby Finkenauer,” Biden said.

In both campaigns, fluctuating polls and high expenditures show competitive races between the Republican and Democrat candidates.

Kate Waters, communications director for Finkenauer’s campaign, said the goal of the event is to make Iowans aware that they can vote ahead of Nov. 6. Voters can visit their county auditor’s office to vote early until the office closes Nov. 5. She also noted the event was an opportunity to recruit more volunteers.

RELATED: In the heart of no-party country, Blum and Finkenauer eye independent voters

“We’re thrilled to have [Biden] come,” Waters said. “Folks love him, and we’re excited about the enthusiasm and the energy we’re seeing.”

Biden endorsed Finkenauer in June — his first 2018 endorsement in Iowa.

Finkenauer said she decided to run for Congress while she was standing in the Iowa state House, waiting to vote no against collective bargaining, which she said, was going to hurt k-12 education and make it financially harder on families.

“I decided to run for Congress because this is personal,” Finkenauer said.

She told the crowd that hope, common sense, and decency are on the Democratic ballot this midterm election. Finkenauer said Biden joined her tonight because of the values that they share.

Finkenauer worked for Biden’s caucus campaign in 2007 as the State of Iowa Volunteer Coordinator.

Bret Nilles, chairman of the Linn County Democrats, said this event aims to motivate Finkenauer and Hubbell’s volunteer base.

“[Biden] wants to come and show that he is supporting winners,” Nilles said.

Cathy Grawe, member of the Johnson County Republicans, said Biden’s visit could encourage Republican voters to come out to vote. Grawe said she’s seen an action-reaction effect on both sides of the aisle.

“Sometimes they send the big guns where the close race is,” Grawe said.

She said that this race will be decided by who turns out to vote.

“Instead of turning people off, [visits from prominent party members are] often getting the opposite effect: to get the opposite party riled up to vote,” Grawe said.