Anyone willing to get a tattoo of a preselected design was invited to participate in a fundraiser for Iowa City families. 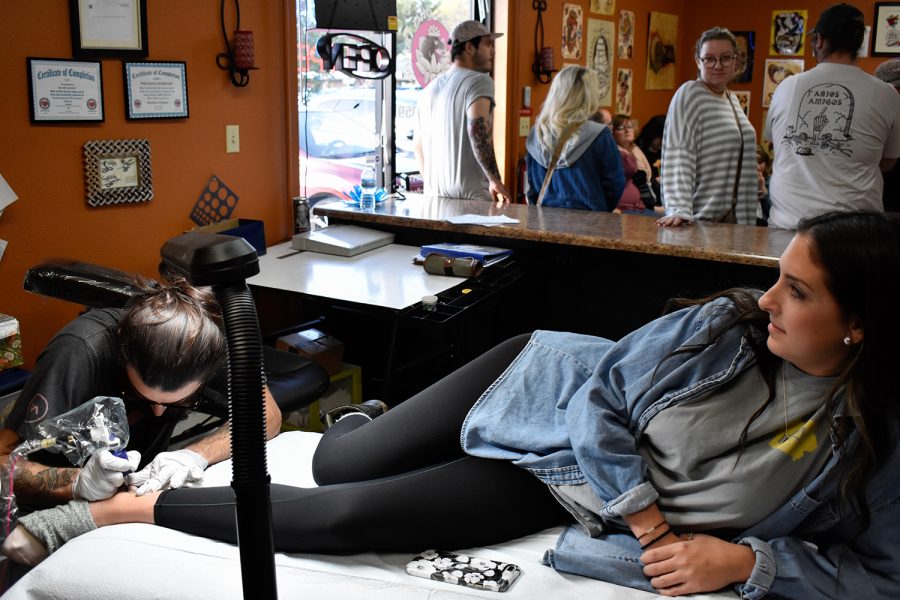 My heart beat so fast. I’m wasn’t sure why; it’s not the first time I’ve felt the odd, vibrating scratch of a tattoo needle. My nerves probably stemmed from impulsiveness, a trait I don’t typically possess but practiced on Sunday.

People started to sit outside Velvet Lotus Tattoo on Sunday as early as 11:30 a.m., eagerly waiting to participate in “Tats for Tots.” The owner, Michelle Balhan, came out in cat ears and face makeup and invited everyone in.

“Tats for Tots” started last year, when Balhan met Anne Ventullo, an independent, licensed social worker who works closely with the Johnson County Family Drug Treatment Court and her agency, Families Inc. Through her work, Ventullo noticed many families struggling throughout the year, especially at Christmas.

Since she entered the social work field, Ventullo’s family and friends have donated to help the families in the community. Last year, Balhan decided she wanted to help more than just donate, and that’s when she proposed to hold a fundraiser at Velvet Lotus called “Tats for Tots.”

The community was invited to come to the shop and choose from pre-selected designs from $40 to $80. All proceeds will go directly to the families Ventullo works with; artists and the shop make only what customers choose to tip.

“I wanted to give back,” Balhan said. “I opened up five years ago, and the community has been very welcoming. The business is growing and growing, and this is just a little way to give back. I want to do this every year.”

When we walked in the shop, our ears were greeted with “Thriller,” by Michael Jackson, playing over the speakers. I stood in line looking over the selection of pre-drawn designs to choose from, making sure I still wanted the little crescent moon I had picked out beforehand.

I took a seat and nervously awaited my turn. I sat next to a New Jersey native turned Iowa City citizen, Cassi Elton. She was here getting her first tattoo, and she opted for the broom design. She told me that it reminded her of the one that she and husband Braeden Jones had been given for their wedding seven years ago.

They practiced the tradition of jumping the broom and picking it up together, signifying the commitment to work together as a married couple. When she saw the charity advertisement on Velvet Lotus’ Instagram and the nostalgic broom among the available art, Elton knew this was the right time for her first tattoo.

RELATED: A tattoo virgin walks into a tattoo parlor

“We saw it was a charitable cause, and we wanted to support,” Elton said.

Once they arrived, Jones surprised Elton and decided to get the same one with her. Now, when the two see their tattoos, they will be reminded of what they promised each other the day they said their vows.

My name was called, and I walked over to my artist, whose name is William Lockhart. “But everyone calls me Blue,” he said.

He seemed just as stoked about my little crescent moon as I was. He took care in placing the stencil and outlining the delicate design, all while cracking jokes and forcing me to refrain from laughing so I could stay still.

The pain was nothing. The meaning was everything. I knew this little moon on my ankle meant less stress for parents in need and a smile for their children on Christmas morning.