The three candidates for the position offered their ideas to the community in a forum on Monday. 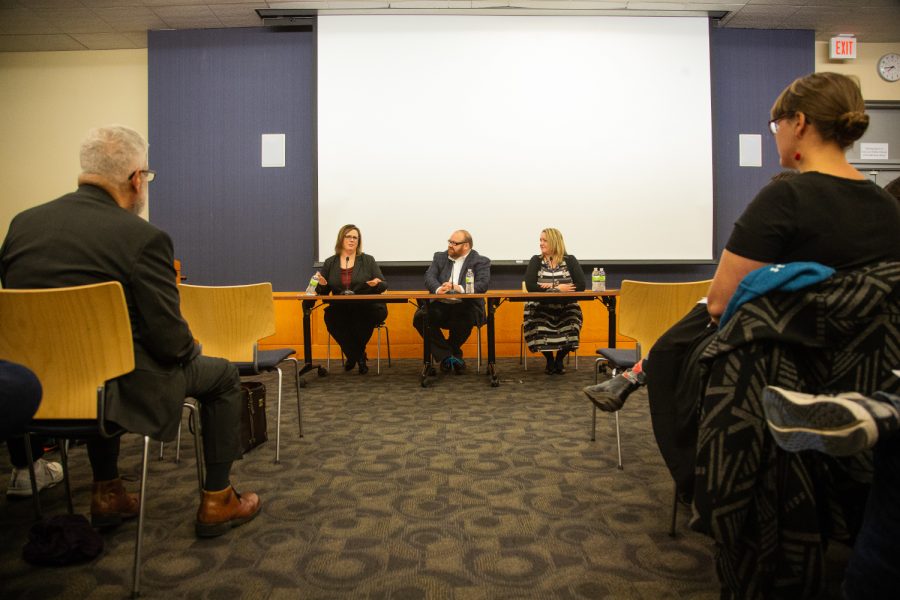 The Iowa City Public Library held a public forum on Monday seeking input on the hiring of a new library director.

The library’s current director, Susan Craig, is retiring after 24 years. Craig said the library is looking for a director that can uphold the library’s role as a cornerstone of the community.

“The Iowa City Public Library is really a community center and a hub of so much activity that goes on in the library,” she said. “We need a new library director that will carry on those traditions.”

The library has narrowed the search down to three candidates: Elsworth Carman, Kim Kietzman, and Sheila Schofer. The three candidates were present to introduce themselves and answer questions from the public at the forum.

Carman has worked in libraries in New Jersey, Washington, D.C., and Illinois. Most recently he served as director of the Marion Public Library.

Kietzman began as a children’s librarian, and said she has worked in every department of a library. She is currently director of the Altoona Public Library.

Schofer, a native of Iowa, is currently on the executive management team at the Brooklyn Public Library in New York.

Each candidate gave a presentation at the forum, introducing themselves and answering the question, “What is the role of the modern public library in today’s society?”

Carman addressed the public first, with a speech that focused on a library’s role in promoting inclusion in the city.

“My honest opinion is that the public library’s role in today’s society is to be a place that practices radical hospitality in a public-facing way,” he said.

He said libraries need to work to include community members of any race, sexual orientation, and gender identity. Carman said this involves looking at who is included in decision making processes and assessing the best ways to serve different groups in the city.

Kietzman’s presentation was focused on how libraries work to bring communities together.

She said young people are feeling lonelier today than in the past. The library, she said, can be a space that allows for community building.

“There is no building open to the public more special than a library,” she said.

She said libraries can be a place for people to find small groups where they can feel included.

Schofer mentioned how she had worked to implement artist spaces, tutoring centers for children, and create library buildings with affordable housing above them.

Through the library, she has worked to provide IDs to underrepresented groups, provide immigration-based legal services, and help community members in job searches.

Schofer said library workers have to work to build effective community spaces going into the future.

“I think what’s changing is the space and the heavy demand on space to be responsive to communities and to engage people in a civic way,” she said.

Following their presentations, the candidates sat on a panel and answered questions from the audience.