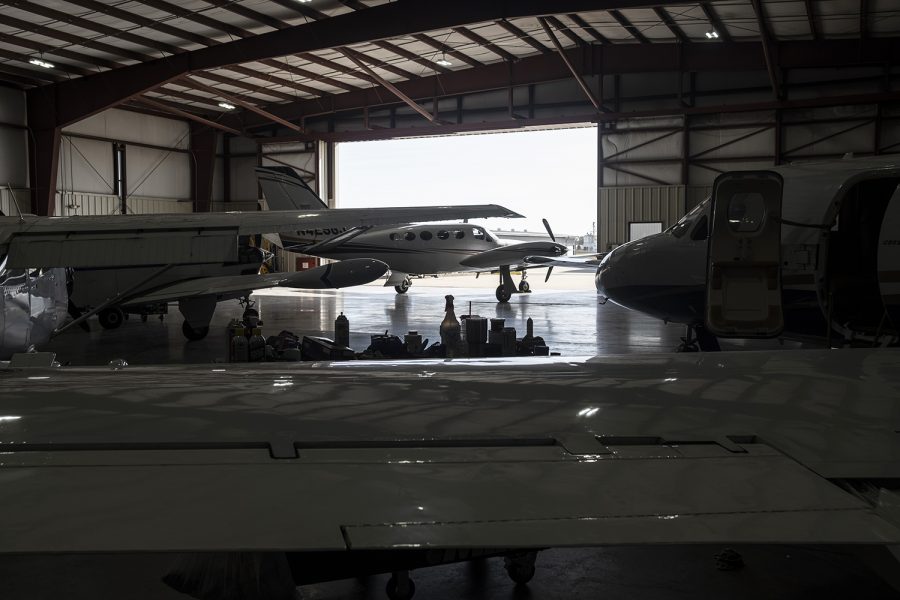 Parked aircraft are seen in a maintenance hanger at the Iowa City Municipal Airport on Wednesday, October 24, 2018.

As the Iowa City Municipal Airport celebrates its 100 years, the U.S. is facing a national pilot shortage that could be detrimental to general aviation.

According to the Federal Aviation Administration, the number of American pilots since 1987 has decreased by 30 percent, while the need for pilots in health and travel has increased.

“I’m not sure we’ve completely felt the effects,” IC Municipal Airport operations specialist Michael Tharp said. “Airlines are doing the best they can to adapt.”

Tharp compared the aviation industry to a ladder, with major airlines at the top, pulling pilots from the regional airlines, which then must pluck from charter companies, which must then offer incentive for retention.

“The pilot shortage is a self-inflicted wound,” Tharp said. “We try to impress upon kids with an aptitude for piloting or mechanics that these are still good and necessary careers.”

The municipal airport is operationally self-sufficient, Tharp said. It required no funding from the city in the last fiscal year and expects only a small need in the next.

Established in 1918, once a mail stop on the cross-country route for United Airlines and then a training depot during World War II, the municipal airport is now home to Jet Air, which has taken measures to expand.

A prominent part of the airport’s community outreach is its partnership with the UI, whose hangar is a research hub for aviation and engineering.

The lab integrates simulation and real-world space to achieve this goal, coordinating with the city and the airport.

“The airport is taking care of business; it’s well-organized and well-run,” Schnell said. “It’s excellent to us.”

He blamed the increased number of hours required to fly commercial aircraft for the pilot shortage. Unlike past years, pilots must have 1,500 hours in the cockpit, which leads to debt and an initially low-income job.

“If people were willing to pay proper cost for tickets, we could pay pilots,” Schnell said. “Once you’re flying transoceanic routes, life’s pretty good, but getting there is tough.”

Specializing in training effectiveness, he said, the pilot shortage could also be the result of lengthy training.

“I can fix technological problems to make training more efficient and more fun,” Schnell said. “But I can’t help it when the sociological parameters are probably overriding.”

RELATED: Updated approval process makes it easier to use drones on campus

Schnell emphasized the need for the airport and its resources, especially in relation to medical transportation and education.

“For the next generation of aviators, you need the small airport,” Schnell said. “Passion starts there.”

The military-pilot shortage differs from the commercial-pilot shortage, Schnell said. Many military pilots may not want to “fly at desk” or work as an administrator, which is required for promotion.

“For military pilots, it’s a retention issue,” Air Force ROTC commander Lt. Col. Nicole Capozzi said. “They see how much they could be paid on the commercial side.”

Capozzi said the Air Force will try to combat this by boosting production pilots and ensuring they are used effectively.

“There’s talk between the Air Force and the airline industry to come to some sort of agreement,” Capozzi said. “Everyone needs a pilot.”

Capozzi said that many choose AFROTC for the opportunity to fly and to pursue medical, legal, or engineering paths in the military.

“We send our cadets to the Municipal Airport,” Capozzi said. “It’s a great experience to gain familiarity with flying.”