UI students supporting Republican candidate for governor Kim Reynolds discuss why they believe she is the best candidate for the job. 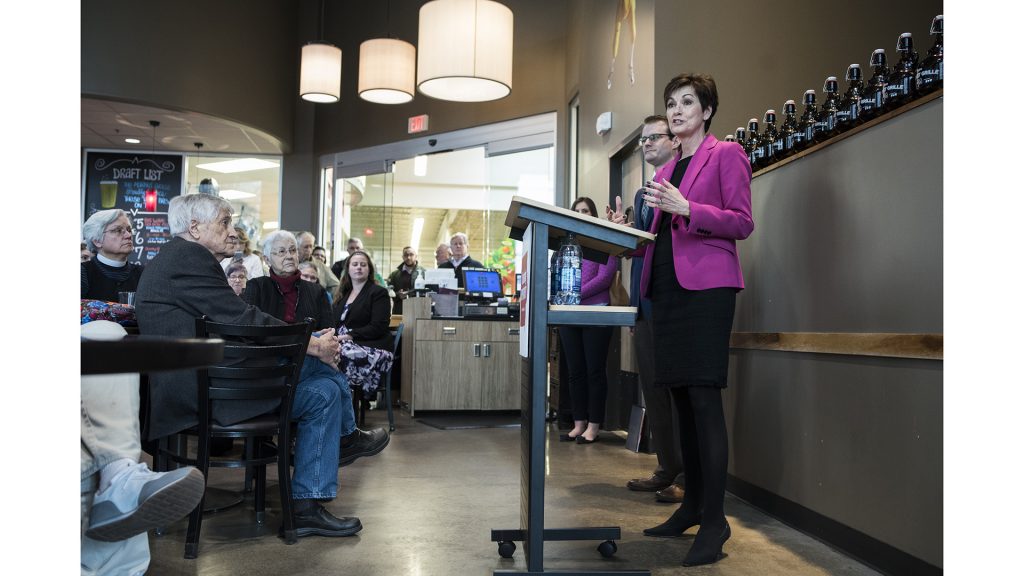 Kim Reynolds talks at Hy-Vee in Coralville during her 99 Counties tour on Thursday, April 5, 2018.

When Iowa Gov. Kim Reynolds stopped briefly by political hotspot Hamburg Inn No. 2 in Iowa City, she was greeted with a banner that read “Immigrants welcome. Kim go home.”

She was in Johnson County, the home of the University of Iowa and where the number of registered Democrats top Republicans by two-fold. A smile never faltering, she shook hands, gave hugs, and greeted all with a “Hi, how are you.” She completed her 15-minute stop by climbing into her campaign bus and riding on to visit more counties that day.

The stop was hosted by UI College Republicans. Red-clad supporters packed into Hamburg Inn No. 2, many of them community members, and several were students.

Despite many liberal-leaning organizations such as NextGen encouraging college students to head to the polls, some students support a Republican for the governor’s office based on issues such as abortion and the economy.

Here’s what you need to know about her and what her student-supporters say.

Who is Kim Reynolds?

Reynolds is aiming to break another glass ceiling this fall as the first elected female governor of Iowa. Reynolds took office in 2017 after her predecessor, former Gov. Terry Branstad, became the U.S. ambassador to China. At that time, she was the first female acting governor of the Hawkeye State. Since then, she presided over one legislative session before embarking on one of the most expensive gubernatorial campaigns ever in Iowa. She’s running against Democrat Fred Hubbell in the race for the governor’s office.

Born Kimberly Kay Strawn, she grew up in St. Charles, a town of 650 people around 30 minutes south of Des Moines. She graduated from Interstate 35 schools in Truro and spent time at Northwest Missouri State University and Southwest Community College, though didn’t graduate with a degree.

In 1982, she married Kevin Reynolds. The couple have three grown daughters and 10 grandchildren.

She started her career in the Clarke County Treasurer’s Office as a motor-vehicle clerk. She was elected county treasurer for four terms before mounting a successful bid for a state Senate seat in 2008. After two legislative sessions, then-Gov. Terry Branstad picked her as a running mate in his campaign for governor, which eventually landed her as acting Iowa governor.

Her story is one part of her campaign she has focused on — the story of a down-to-earth working Iowan. To highlight it, she’s often held campaign stops at Hy-Vee stores to remind attendees of how she worked nights while husband Kevin worked days to make ends meet.

In 2016, she graduated from Iowa State University as a nontraditional student with a bachelor’s degree in liberal studies.

“Everything she has was earned,” said Kyle Apple, the president of the University of Iowa College Republicans. “She went back and took night classes as a parent; she really struggled to get there. We have someone who wasn’t handed everything running our state, and I think that’s the leadership we need to set an example.”

Alex Byrnes, a member of the UI College Republicans, interned with the governor’s office over the summer and has campaigned for Reynolds continuing into the school year. She said she was impressed with Reynolds’ work ethic and relatability.

“She is the hardest working individual – she goes to work so excited every single day to improve Iowa again and again and again. Every single day,” she said. “It was fun to go on county tours because she is the same person talking in front of 50 plus people as she is behind closed doors.”

“She knows exactly what rural Iowans are going through and is able to keep that in mind when she’s governing,” Byrnes said. “She gets it where as her opponent doesn’t understand it as much as she does.”

In September, Kim Reynolds visited Iowa City for the Hawkeye-Cyclone football game. There, she visited a tailgate where University of Iowa senior Jordan Gringer said her interactions were genuine.

“There were people at that tailgate who had no idea the governor was even there,” Gringer, 22, said. “That’s how well she fit in. She didn’t have that air of superiority; she just blended right in with the rest of us.”

Over her year as governor, Reynolds has championed lower taxes, a fetal-heartbeat bill, and mental-health legislation.

In the 2018 legislative session, the governor pushed for tax change at the state level to save Iowans an average of $300 per year after, according to fiscal analyses, after Republicans in Washington passed a tax-cutting package.

The budget surplus is largely due to tax policy changes in Washington, said Jeff Robinson, a senior fiscal analyst for a nonpartisan state agency.

Democrats contend that the extra budget dollars will need to go toward funding an expanded budget, including increased payments to Medicaid managed-care organizations.

Apple said he will vote for Reynolds because he believes lower taxes and pro-business policies will benefit recent graduates.

“The economy is really important both as a student and as a person just because I want it to be strong when I graduate,” Apple said. “We talk about the brain drain of when people leave Iowa to go to Kansas City, Minneapolis, Chicago after they graduate, and I think the best way we can combat that is to give them a strong economy in Iowa.”

In her Facebook “about” page, Reynolds claims to have attracted more than $14 billion in private investment from companies such as Google and Microsoft since assuming the lieutenant-governor position.

UI senior and state Senate candidate Pat Wronkiewicz, a Republican, has also hoped to attract students with a similar vision of a booming economy once students graduate.

“As a student, when I graduate, I want other students to have job when [they] graduate,” Wronkiewicz said.
Reaching students

Greif, who has never met Reynolds, said he would have liked to see her on campus, pointing out that Hubbell visited Iowa State’s campus Oct. 23 to talk with voters.

Other students said they hadn’t seen much of either candidate. Gringer, who is also the treasurer of the University of Iowa Republicans, said he didn’t think either campaign resonated with young voters.

“I don’t think many gubernatorial candidates are designed to just appeal just to students,” Gringer said. “… I think [Reynolds] appeals more to rural Iowans, and that’s her background, too. It’s not a bad message, it’s true.”

On education, Reynolds prioritizes K-12 funding, and she supported a 1 percent increase to public schools’ budget this past year. She also championed a unanimously supported initiative, Future Ready Iowa. The legislation sets a goal for 70 percent of Iowans to have some kind of postsecondary education or job training by 2025.

She, along with other Republicans, have been criticized by opponents for $11.5 million in cuts made in 2018 to community colleges and the state Board of Regents’ schools, the three public universities in Iowa.

On the environment, the first bill Reynolds signed into law was a water-quality bill. She has said she supports building on the $282 million it put in place to support conservation infrastructure. She also instituted an Empower Rural Iowa initiative, which aims to provide broadband access across Iowa and revitalize downtowns. She cheered President Donald Trump when he announced E15 ethanol would be available year-round.

Health care has been a major battle ground in the race for Iowa’s governor. Although criticized by her opponent, Reynolds supports her predecessor Branstad’s decision to place the state-managed insurance program for low-income Iowans, Medicaid, under the control of private managed-care organizations. She also supported mental-health legislation to establish crisis centers and residential-treatment programs across the state.