After a shaky air attack against Penn State, Mekhi Sargent stepped up to give Iowa a boost on the ground. 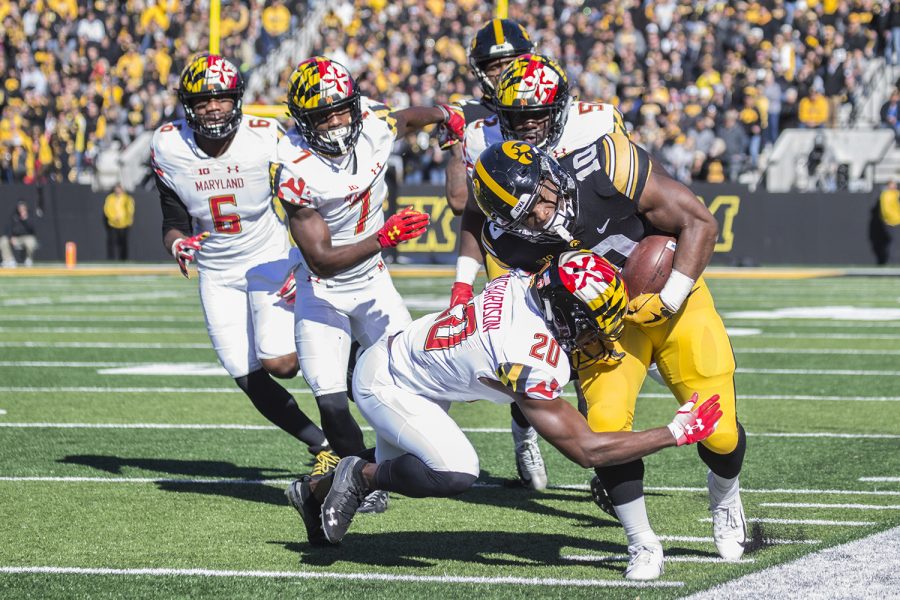 Iowa running back Mekhi Sargent gets tackled on the sideline during a football game between Iowa and Maryland in Kinnick Stadium on Saturday, Oct. 20, 2018. The Hawkeyes defeated the Terrapins, 23-0.

Overshadowed by an abysmal air attack, Iowa running back Mekhi Sargent quietly had the best game of his young Hawkeye career from a yardage standpoint in the Hawkeyes’ 30-24 loss at Penn State.

Sargent, a sophomore transfer from Iowa Western, rushed for a career-high 91 yards on 16 carries and caught a pass for 15 yards.

In a season in which Toren Young and Ivory Kelly-Martin have been the lead backs, Sargent stepped up in one of Iowa’s biggest games of the season.

Despite Sargent’s performance, the offense fell flat in what could be considered primarily a defensive battle.

“It was two pretty good defensive teams playing,” Iowa head coach Kirk Ferentz said. “Some games, there is a flow offensively. I thought it was pretty tough for both teams to move the ball … It’s not like anybody was driving the ball up and down the field. Sometimes, games get like that.”

Sargent’s arrival in Iowa City has been bigger than imagined through eight games this season. Kelly-Martin, who is listed as the starter, has dealt with injuries all season and has missed three games.

Sargent and Young have had to pick up the load, and the Hawkeyes haven’t missed a step.

Against Indiana, the Iowa offense was incredibly balanced, and the run set up the pass, allowing quarterback Nate Stanley to throw 6 touchdowns.

Young ran for 96 yards and Sargent picked up 59 on 10 carries. Without the running game getting going, it would have been difficult for Stanley to put together the offensive explosion that he did.

Against the Nittany Lions, the running game took over — in a way. Stanley struggled mightily, and the offense couldn’t keep a drive going.

Sargent had a hot hand, however, and was one of the few bright spots on a disappointing day. Still, there were times in which the ground game couldn’t consistently move forward.

When things were going well, such as Iowa’s final drives when it moved the ball efficiently, playing as a group was key.

“I think we were out there playing as a unit, playing as a team,” Sargent said. “Football is a team sport, so I feel like that played a huge part.”

It will still be important for the Hawkeyes to improve on the ground, though. The backs are young, but they have grown as the season has gone on. Combine that with an offensive line that has excelled at opening holes, and that is a recipe for success.

Now, the Hawkeyes need to move on. In a tight race to the top of the Big Ten West, Iowa can’t afford to have any more lapses in the passing game.

With the success Iowa has had in both aspects of the offense, teams can’t expect the Hawkeyes to stay down with the weapons they have.