It’s a four-team race for the Big Ten West, as we all guessed before the season started. 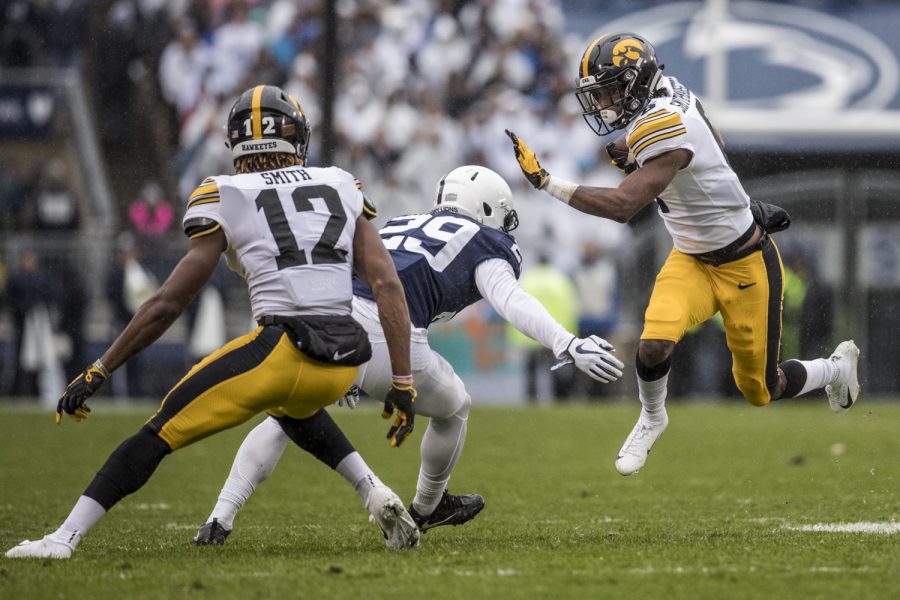 Right before Iowa’s kickoff against Penn State, the final whistle blew for the Northwestern-Wisconsin game. The Wildcats won, handing the Badgers their second conference loss of the season.

At that point prior to kickoff in Happy Valley, winning out meant claiming the Big Ten title for the Hawkeyes — if Iowa had beaten Penn State and then theoretically won its remaining games, the Hawkeyes would finish with just one conference loss, better than both Northwestern and Wisconsin.

Instead, that Hawkeye victory didn’t happen. Now, there’s pretty much a four-team race for the Big Ten West among Iowa, Northwestern, Purdue, and Wisconsin.

Northwestern has just one conference loss this season. A Hawkeye win against the Wildcats would give Northwestern a second Big Ten loss, and, thanks to the tiebreaker of Iowa’s theoretical victory, it would be ahead of Northwestern in the standings.

But after Iowa, Northwestern plays two lackluster conference opponents in Minnesota and Illinois. The Wildcats also have a contest against Notre Dame (which I think they’ll lose), but a loss there doesn’t hurt them in the Big Ten standings.

That Iowa-Northwestern game has a good chance at deciding who represents the West in Indianapolis; Purdue has big-play ability, but the Boilermakers are inconsistent, and Wisconsin isn’t nearly as good as everyone (including me) thought it would be during the preseason.

Just like most of the Big Ten, Purdue is extremely inconsistent. A 29-point thrashing of then-No. 2 Ohio State had many wondering just how far this team could go. But then you’ve got games such as the Boilermakers’ loss to Eastern Michigan, and then this week (just seven days removed from throttling the Buckeyes), they put up just 13 points in a loss to Michigan State.

Out of the teams remaining on Iowa’s schedule, Purdue is the most explosive and dynamic offensively. I’ve said this before, but teams have had a hard time defending head coach Jeff Brohm’s offense, and it reminds me of how Iowa’s passing game (a relatively new wrinkle compared to years past) worked in offensive coordinator Brian Ferentz’s favor against teams like Indiana and Minnesota. Just like how Iowa’s offense seemingly transformed (and regressed against Penn State, but that’s not the point here) into a juggernaut, Purdue’s offense has the same capability, especially with freshman do-it-all receiver Rondale Moore.

At best, Purdue finishes 8-4, and that’s with wins against Iowa and Wisconsin. Do I think that’ll happen? No. I have the Boilermakers winning seven games, tops, and not traveling to Indianapolis when the regular season concludes.

Ah, yes. Wisconsin. Iowa needs the Badgers to lose at least once more in Big Ten play, because an identical conference record works in Wisconsin’s favor — it took down Iowa at the start of Big Ten play.

Wisconsin will play Rutgers, Penn State, Purdue, and Minnesota. I look at the two games against the Nittany Lions and Boilermakers to cause the most trouble (both are on the road, too).

If Wisconsin plays like it did on Oct. 27, both of those games will be losses. And not much tells me they’ll play any better, frankly. Penn State’s win over Iowa is a momentum builder, and I see the Nittany Lions taking down the Badgers.

Best case for Wisconsin, I see the Badgers finishing 8-4, with their final loss of the season coming against Penn State. Also not out of the question (but not as likely) is Wisconsin finishing 7-5, losing both of those road contests I highlighted.

In theory, it’ll come down to Wisconsin, Northwestern, and Iowa. Purdue is too inconsistent to win the division.

What’s going in Northwestern’s favor is its schedule; aside from a trip to Kinnick, the Wildcats have a Big Ten cakewalk. Iowa has a tougher conference schedule, but the remaining games are all winnable.

It’s simple: If Iowa wins out and Wisconsin loses one game, the Hawkeyes take the West. But that’s easier said than done. Hawkeye wins against Purdue and Northwestern in the next two weeks would make those Indianapolis aspirations much more attainable.