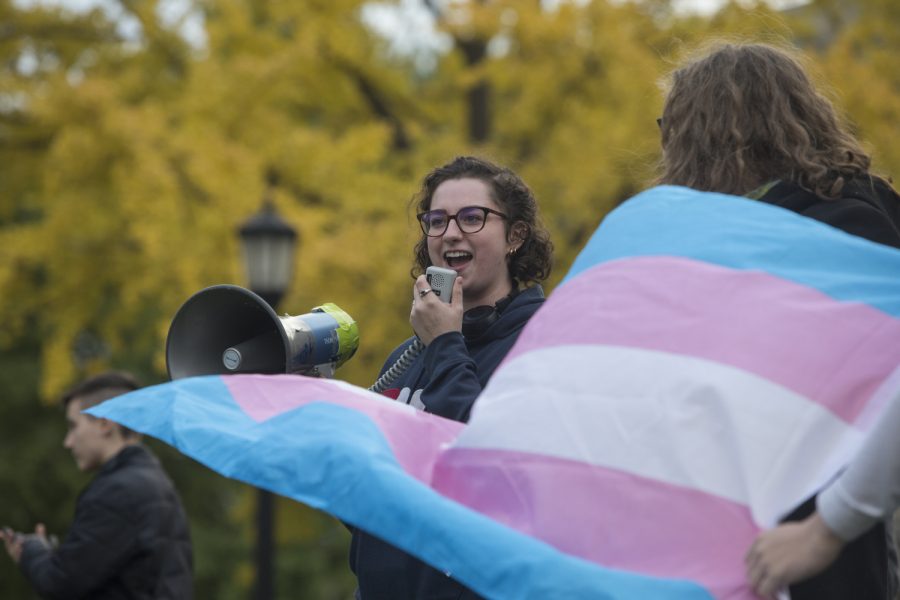 Margo O'Neill addresses the crowd during a transgender rights rally on the Pentacrest on Thursday, Oct. 25, 2018. Protesters gathered to promote rights in light of the upcoming elections.

Survey results of a University of Iowa study have shown the disadvantages the LGBTQ community faces in regards to health care.

The report highlighted deficiencies in care for transgender and gender-queer individuals, as well as high levels of reported binge drinking and unmet mental-health needs among LGBTQ people.

UI Assistant Professor Paul Gilbert said he and his colleagues started talking about the lack of data about the LGBTQ community in the spring of 2017.

“Even though LGBTQ health has been getting more attention over the last 20 years, a lot of that work has been nationally focused,” Gilbert said. “So, there hasn’t been a lot of attention to the Midwest.”

One Iowa Executive Director Daniel Hoffman-Zinnel said the organization’s biggest role was promoting the survey to get the largest number of respondents possible.

One Iowa’s efforts led to 567 LGBTQ Iowans completing the survey. Gilbert said the large sample size allowed the team to break the results down into sub-groups in the LGBTQ community and compare different orientations and gender identities.

In nearly every category the survey looked at, trans and gender-queer people fared worse than their cisgender counterparts.

UI Trans Alliance President AJ King said this could be attributed to lack of information both among trans individuals and health-care providers.

“In regards to UI trans students, many simply just don’t know what resources are accessible to them when it comes to trans-related medical help,” King said in an email to The Daily Iowan. “In my personal experience, I didn’t know what was available to me until I attended a somewhat niche educational event that covered the legalities and medical side of trans-ness.”

RELATED: UI earns 4 out of 5 stars for LGBTQ friendliness

Another issue highlighted in the report was the high levels of binge drinking in the community. According to the report, LGBTQ people were twice as likely to report binge drinking compared to a 2016 survey of the general population of Iowa.

UI Spectrum Outreach Director Alex Bare said the prevalence of gay bars could encourage drinking as a coping mechanism for the community.

“We know that, historically, gay bars have been places where people can congregate and find a sense of security or a sense of belonging,” Bare said. “For some members of the LGBTQ community, the combination of that and the stress of the community is a dangerous combination.”

Gilbert’s team is still working, and he hopes to rerun the survey again in the future to see if certain issues improve.

“We’re still working on digesting the data and figuring out what we’ve learned, continuing to analyze it,” Gilbert said. “We’re going to be writing more scientific papers, stuff to contribute to the more academic side of things, but our priority was first to get out a general public summary just to get the word out.”