Iowa volleyball seeks to get back on track against Maryland

Iowa volleyball is on a four-match losing spiral. As the season is nearing its end, a win this weekend against Maryland would help the Hawkeyes get back on track. 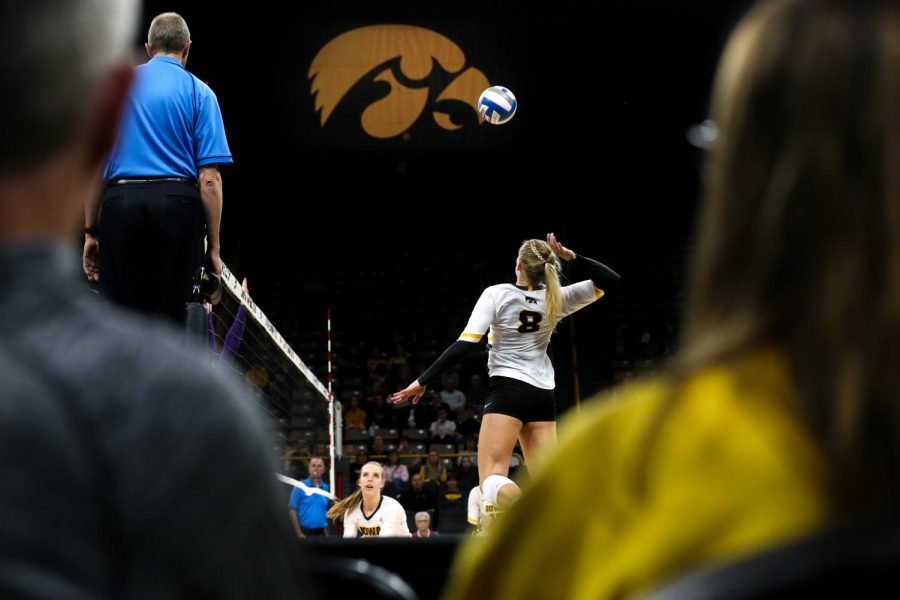 After its loss to Northwestern on Oct. 24, Iowa volleyball stretched its season’s worst losing streak to four matches. It hopes to end the skid with a win against Maryland this weekend in College Park.

The team has not been the same since its sweep of Rutgers on Oct. 10. Slow starts have haunted the Hawkeyes, and they have struggled to click on both sides of the ball. Standout Cali Hoye was absent last weekend in matches against Wisconsin and Minnesota, making it hard for the team to keep up with aggressive top teams.

Especially in hard times, it is vital that players not get wrapped up in comparing themselves to other teams in the league. At head coach Bond Shymansky’s urging, the volleyball players remain focused while not deeply analyzing its standing in the Big Ten.

“If you start trying to project and get too far ahead of yourself in the league, you get really distracted,” Shymansky said after a loss earlier this season.

Iowa’s eyes are set on Maryland. The Terrapins have been solid thus far in the season and have a 13-10 record.

Hitter Erika Pritchard and middle blocker Katie Myers have been bright spots this year for Maryland volleyball. Pritchard has put up 4.17 kills per set this season, second in the conference. Myers leads the Big Ten with 0.46 aces per set.

The Hawkeyes certainly have the talent to compete with the Terrapins.

Outside hitters Cali Hoye and Taylor Louis have given the Hawkeyes excellent performances this season. Hoye and Louis are both in the top 10 in the Big Ten in kills per set with 3.86 and 3.81, respectively.

On the defensive side, libero Molly Kelly has been in position when her team has needed her. Her 4.99 digs per set are second in the conference.

Despite all of the positive stat lines, something has been missing recently.

In recent weeks, slow starts have hurt the squad. In its match against Northwestern, Iowa lagged greatly in the first set and lost it handily before adjusting and turning the evening into a five-set match.

The team hopes to get into that rhythm early against Maryland.

“[We need to have] stronger starts,” Kelly said. “The first set [against Northwestern] was rough for us. Just staying consistent on our side.”

Even in its struggles, a lot is going right for Iowa. The stellar outside hitters have been performing very well, especially in connecting with setter Brie Orr. Orr had 56 assists in the team’s match against Northwestern, helping Hoye tally 30 kills.

“Our outsides [are doing] really well with connecting with [Orr],” senior Reghan Coyle said. “[Northwestern’s] middles were unsure with where to go. We are excited about all of our options in the next match.”

Despite tough times, Iowa still has a legitimate shot at that coveted berth in the NCAA Tournament. A win against Maryland this weekend would put the Hawkeyes back on track. and it would come at a vital time with gritty Penn State heading to town next weekend.