Iowa cross-country heads to Lincoln, Nebraska, to compete in the 2018 Big Ten Championships 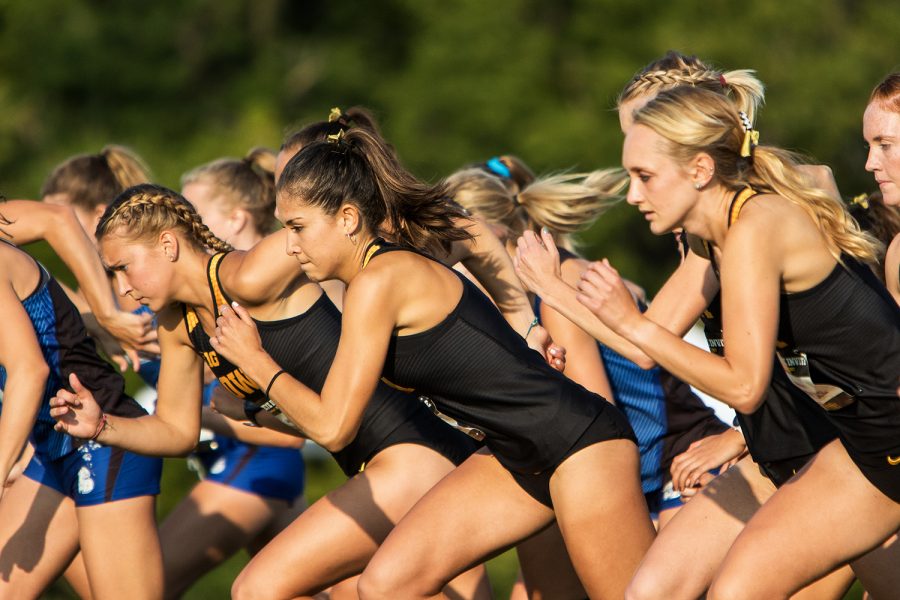 The Iowa Women's Cross Country team sprints out of the box at the start of the Hawkeye Invitational Cross Country meet on Friday, Sept. 1, 2017.

The postseason has arrived for Hawkeye cross-country, and it begins with a much-anticipated race: the Big Ten meet. The Iowa men and women are ready.

“This was kind of the year that everyone has been looking forward to,” junior Nate Mylenek said. “I think it is going to be a quiet bus ride, but everyone on the team is really good at staying loose and just staying excited, so we’ll show up to the meet ready to move.”

The Hawkeyes will need to continue this attitude as they head to Lincoln, Nebraska, this weekend to face a course full of competitive teams.

The men will race against teams with high regional rankings, especially from the Great Lakes. At the starting line will be No. 1 Wisconsin, No. 3 Purdue, No. 4  Indiana, No. 5 Michigan, and No. 6 Michigan State. In addition, No. 5 Penn State from the Mid-Atlantic, No. 7 Illinois from the Midwest, and No. 10 Nebraska from the Midwest will also join in. Rutgers and Ohio State are not ranked, and Northwestern and Maryland do not have men’s teams.

The Iowa men hold the No. 6 spot in the Midwest. With so many top-level teams, anything can happen.

“You could run great and get sixth, or you could run average and get 10th,” Iowa head coach Randy Hasenbank said. “It’s just that tight.”

But Hasenbank knows that the experienced Iowa harriers have it in them to hold their own.

The men will run the 8,000 meters at 11:45 a.m. on Oct. 28; it will be the Hawkeyes’ third 8K of the season. Their previous was at Pre-Nationals on Oct. 13, where they placed 16th. The other 8K at was at Nebraska’s Woody Greeno Invitational, hosted on the same course they will run on for the Big Tens. The Iowa men placed second that meet. Daniel Soto and Mylenek led the Hawkeyes in both races.

The Iowa women will be tested against an even tougher field than the men’s.

“You can’t work your way into this type of race,” Hasenbank said. “You need to be ready as soon as the gun goes. You got to be ready to compete at a high, high level, and so if we all compete to our potential, I expect a pretty good result.”

The women will run a 6,000 meter at 10:45 a.m. Similar to the men, this will be their third 6K of the season and the second time running on this course. The women have been led by two of their seniors, Andrea Shine, and Megan Schott.

“The entire team, including me, is really excited going into the Big Tens,” Shine said. “We had a great workout Tuesday where everyone was feeling fast. Yesterday, we were feeling recovered, so we have the biggest factors for the race perfectly aligned for [Oct. 28].”