State senate candidate Zach Wahls, a Democrat visited with The Daily Iowan to talk health care and his vision to update the Democratic Party. 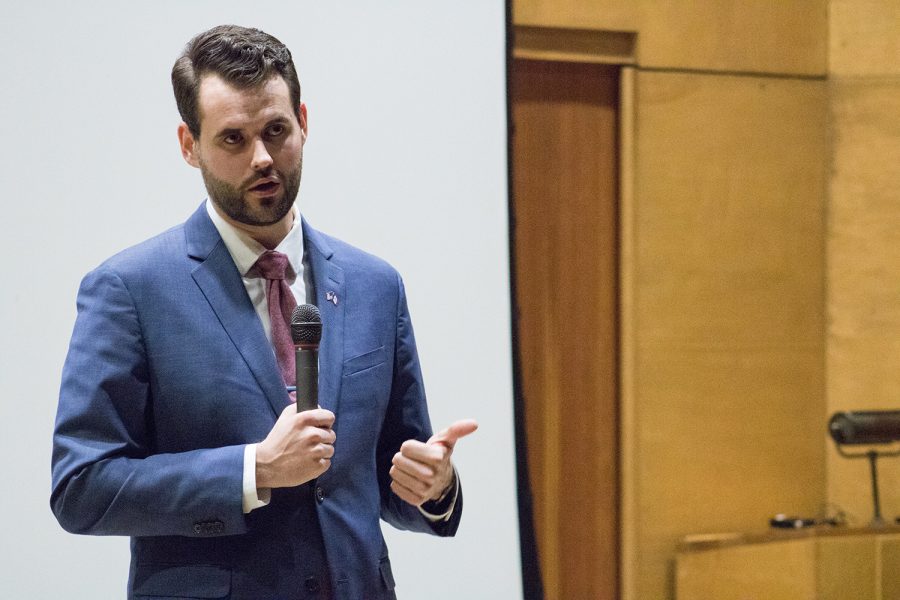 When on the campaign trail in District 37, which covers all of Cedar County and the northeastern part of Johnson County and Coralville, Wahls said the subject people talk to him about the most is health care. Most commonly, he said, conversations revolved around insurance costs, Medicaid privatization, and/or mental-health treatment. He also criticized the new Farm Bureau health plan unveiled Oct. 3, which offers lower premiums for members but allows the company to turn away patients with pre-existing conditions.

A solution to insurance costs that Wahls suggested is called reinsurance, a form of insurance for insurance companies as seen in states such as Alaska, Minnesota, and Oklahoma.

Experience in the political landscape first came to Wahls through his work as an activist for the LGBT community. In 2011, a video of a Wahls speech went viral. He spoke before Iowa House Judiciary Committee hearing on a proposed constitutional amendment to ban gay marriage in Iowa, describing his experience being raised by two women.

Like other Democratic newcomers, Wahls was spurred to action by the 2016 election and the aftermath. He said that while he was completing a master’s degree in Public Affairs from Princeton, he kept watch on politics in his home state.

“I was watching from afar as the Republican-controlled Legislature brick by brick went after health care, education, and workers’ rights and punted natural resources and water quality,” Wahls said. “It was pretty tough to watch.”

He launched his campaign as he finished his course work there and completed his degree earlier this year.

When coming up with policy-based solutions to issues such as health care, Wahls said, he talked to the experts such as researchers and professors at the University of Iowa.

He said one of his goals as a Democrat would be to bring in voters disenfranchised by his own party. During a visit to Clarence, Iowa, he said, with a population of 977, he spoke with some in the town who believed the Democratic Party has not been around for them.

One of the problems the party has faced in recent history is lagging support from the working-class component of its tent, he said.

“The Democratic Party has to get back to talking about issues in a way that is not pitting people against each other by talking about the shared experience of being a marginalized individual whether you’re a person of color or just trying to make ends meet, or both,” Wahls said.