A tale of two autonomous vehicles

On Wednesday, I rode with researchers from the National Advanced Driving Simulator in two autonomous vehicles – I was both afraid and entranced by the technology. 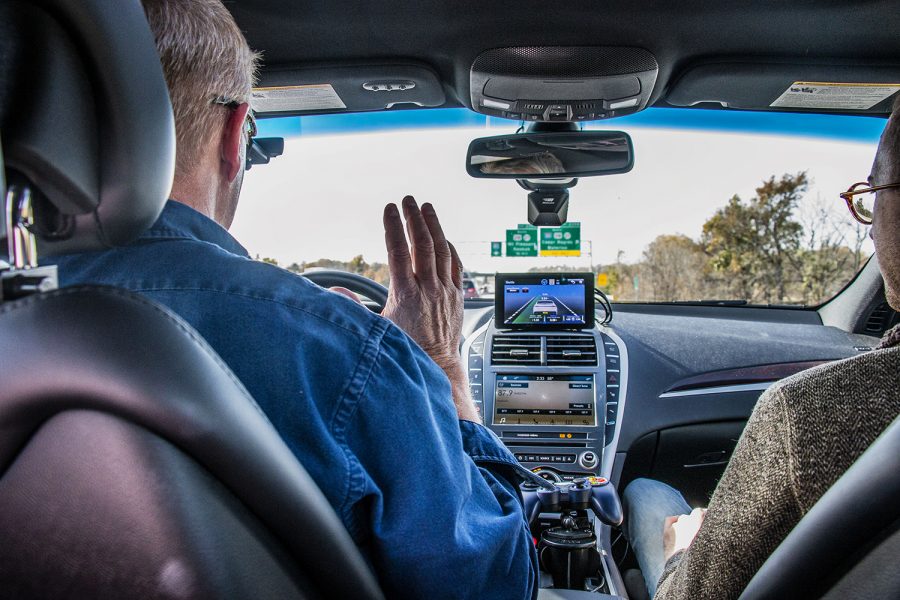 Engineer Greg Wagner drives the autonomous new Lincoln MKZ on I-80 on Wednesday, Oct. 24, 2018. The researchers are creating new softwares to enhance autonomous features in Tesla and Lincoln MKZ.

On Wednesday afternoon, I rode in two automated vehicles at the National Advanced Driving Simulator in Coralville (and lived to tell the story.)

There might as well have been smoke pouring out of the trunk of the Lincoln MKZ, because I felt as though I was on the set of an unreleased Star Wars movie. With my heart racing, Greg Wagner, an engineer at the simulator, opened the Lincoln’s trunk to reveal a complex array of sensors, computers, and wires. Wagner told me these sensors enable the car to operate in three different “modes:” manual driving, “drive by wire” (using a game console controller), and autonomously.

“Using high-definition mapping, the car can adjust to variables such as lane markings while driving autonomously — this mapping can allow the car to adjust its position to a 3-cm level of accuracy,” he said.

As I buckled my seat belt, Wagner engaged the “drive by wire” function — the car roared to life, and he began operating it, braking and all — with what appeared to be an Xbox controller. Wagner reversed, steered the car, and parked using this driving method. After this demonstration, we arrived on I-80 to test the car’s full autonomy.

My eyes darted back and forth between the road and Wagner as he engaged autopilot. “Punch it, Chewie,” I thought to myself, as if the car would begin to travel at light speed.

Surprisingly, I didn’t feel much of a difference between when the autonomous features were engaged and when they were not; I chuckled nervously as Wagner explained the car’s features with an air of nonchalance I found quite admirable.

With apparent ease, the Lincoln maintained following distance, changed lanes, and adjusted its speed as necessary. Steve Cable, one of the simulator’s engineers who was sitting in the back seat, said the car is continually communicating with the simulator’s “control center.”

“We’re really trying to use all of the sensors while testing the autonomous functions,” Cable said. “Sometimes the lane markings, for example, aren’t clear — this is when GPS sensors and high-definition mapping work in tandem to keep the car in its lane.”

Once the Lincoln pulled back into the driveway, Cher Carney, a senior research associate at the simulator, took me for a test drive in the Tesla Model S. As we drove down I-80 using the Tesla’s automated cruise control and lane changing, Carney said drivers need to be aware of the limitations of current autonomous vehicles.

“We’re going to start looking into drivers engaging in secondary tasks, such as holding a drink or using the touchscreen, while using the Tesla’s autopilot function,” she said. “I think one thing that’s going to change in the next few years is how we teach driver’s ed. What we found in one of our studies with [the American Automobile Association] was people were overly reliant on automated systems.”

At times, it is easy to feel uneasy about the future of autonomous vehicles. Despite the level of safety involved with the National Advanced Driving Simulator’s vehicles, somehow I felt more comfortable behind the wheel of a manually driven car.

Regardless, I’m fascinated with the future of autonomous travel, and as someone who is somewhat driving-challenged, I certainly wouldn’t mind an autonomous lane change or two.