2020 Watch: Who are the national politicians visiting Iowa?

With Iowa’s 2020 caucuses just over 15 months away, national Democrats and Republicans are visiting the Hawkeye State to boost Iowa candidates. 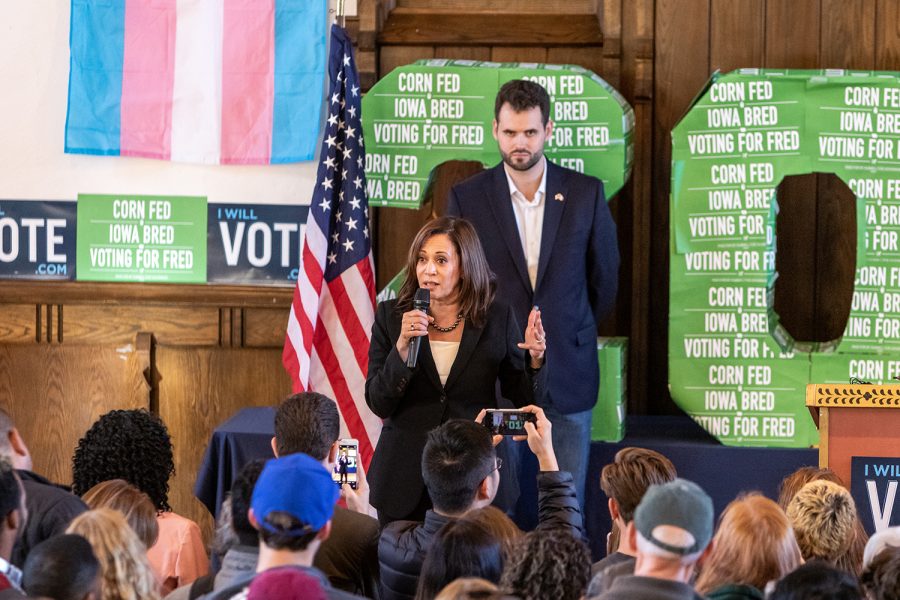 Iowa holds the first-in-the-nation presidential caucuses, and with November midterm elections approaching, national politicians from across the U.S. have been making stops in Iowa to rally support for Iowa candidates.

Michael Englehardt, a political-science professor at Luther College, said that while national politicians have always traditionally made a lot stops in Iowa, he noticed that visits this year are more intense than usual.

“They all say they are campaigning for local Democrats, but they’re also putting their names out there,” Englehardt said.

He said that this year, he’s seeing donations and energy in the midterms on a scale similar to a presidential election.

Though only a select few politicians have declared their candidacy for the Oval Office in 2020, many below have been rumored to house presidential intentions.

Harris spoke at the University of Iowa on Tuesday, where she rallied for early voting and campaigned with Democratic Iowa secretary of state candidate Deidre DeJear and Democratic Iowa Senate candidate Zach Wahls. She was a vocal critic of Senate Republicans in the confirmation process of now-Justice Brett Kavanaugh.

“This is a moment where we are all individually and collectively being required to look in a mirror and ask, ‘Who are we?’ ” Harris said in Iowa City. “I believe part of the answer to that question is we are better than this.”

Harris headlined a Democrat rally in Polk County the day before her stop in Iowa City.

Sanders has made four trips to Iowa since 2017, the most recent being in central Iowa Oct. 20 -21 in which he endorsed and campaigned with Democratic candidate J.D. Scholten in Iowa’s 4th Congressional District.

Sanders spoke at Iowa State University, where he called to dethrone Rep. Steve King, R-Iowa, and criticized much of President Donald Trump’s policies, according to a report in the Des Moines Register.

Sanders was the runner-up for the Democratic nomination in the 2016 presidential race, and he has been rumored to be campaigning again in 2020.

Booker made a three-day stop in Iowa Oct. 6 through Oct. 9. He headlined a major fundraising event for the Iowa Democratic Party at Hy-Vee Hall in Des Moines, hours after he voted no on Kavanaugh’s confirmation.

In Iowa, he emphasized to party members the importance of keeping a moral high ground before the upcoming midterms.

Merkley has made seven trips to Iowa since 2017. His most recent stop was on Oct. 15 in Iowa City, where he spoke at a fundraiser for the Johnson County Democrats.

Merkley said that he wanted to rally support for Democrats across the U.S. before the upcoming midterms, like others did for him when he was campaigning for the Senate in Oregon.

He headlined the Progress Iowa Corn Feed in September, in addition to his five other stops.

Gabbard has made three trips to Iowa City, the first one in October 2017, and the most recent on Oct. 14 of this year.

“There are a lot of important races in Iowa that could make the difference on specific policies,” she said at the Oct. 14 Johnson County Democrats fundraiser, pointing to the secretary of state and Statehouse campaigns.

Rep. John Delaney, D-Md., has campaigned in all 99 counties in Iowa in a run for the Democratic nomination for president, according to Politico.

Andrew Yang, a Democratic businessman, is campaigning for the Oval Office; he says he would give every American $1,000 a month.

Michael Avenatti, the lawyer for adult-film actor Stormy Daniels, made an appearance at the Iowa State Fair in August, at which he said he was strongly considering a run for the Democratic presidential nomination.

Republicans have seen big names rallying GOP voters in the past few months.

President Trump has visited Iowa twice. In July, he visited Peosta. In early October, the president called on voters to turn out for embattled Rep. David Young, R-Iowa, at a rally in Council Bluffs.

Vice President Mike Pence, too, visited Des Moines once this summer to promote the GOP tax-writing agenda and made another stop in October.