Sen. Kamala Harris debuts in Iowa City ahead of midterms 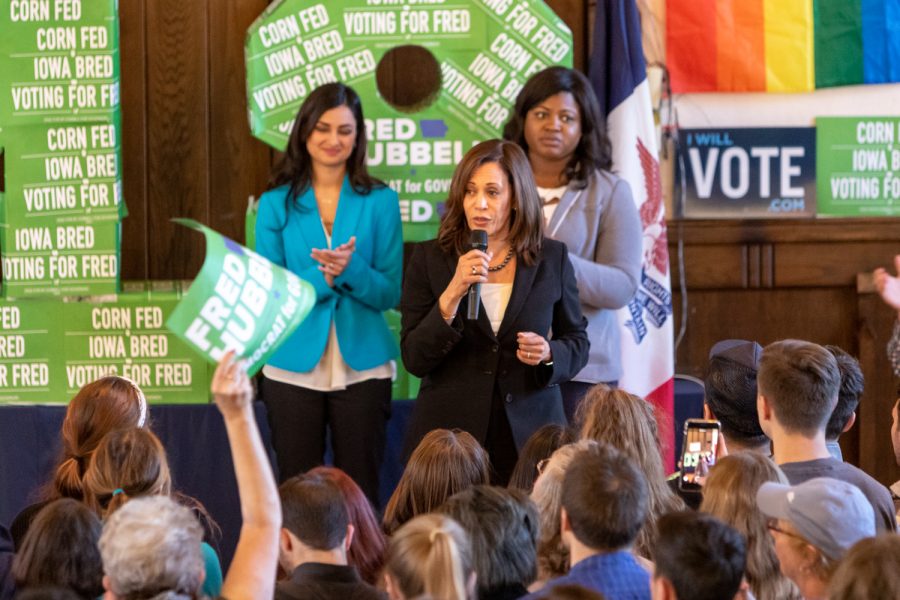 With the midterm elections just a couple weeks away, California Sen. Kamala Harris, a Democrat, urged Iowa City voters to recognize the importance of the November elections.

Harris, a speculated contender for the Democratic presidential nomination in 2020, joined Democratic Iowa secretary of state candidate Deidre DeJear and Democratic Iowa Senate candidate Zach Wahls Tuesday for an early vote rally that packed the Old Brick Church in Iowa City. The event was put on by Campaign for Iowa and the University of Iowa Democrats.

“This is probably one of the most important elections in our lifetime,” Harris said. “This is a pivotal moment in the history of our country.”

Harris’ stop in Iowa City is one of many on her first major visit to Iowa ahead of the state’s February caucuses – it’s just over 16 months away. She joins a number of other potential 2020 candidates to visit Iowa in recent weeks, including Sen. Cory Booker, D-N.J., Sen. Jeff Merkley, D-Ore., and Washington Gov. Jay Inslee (D).

Harris did not discuss her presidential ambitions and instead focused on next month’s general election.

“This is a moment where we are all individually and collectively being required to look in a mirror and ask, ‘Who are we?’” Harris said. “I believe part of the answer to that question is we are better than this.”

She reminded the crowd how much is “at stake” and emphasized how much elections matter.

“So what do we need to do? If they’ve got the power and these are the decisions they make, then let’s take back the power,” Harris said. “And the way we’re going to do that is we’re going to vote.”

DeJear, who was endorsed by Harris, echoed Harris’ point about how important it is for people to vote this November.

“We often talk about critical elections; every year [is a] critical election. But this year we know it is a critical election,” DeJear said. “We have to do as much as we possibly can with this emotion that we have to live beyond Nov. 6. That means it’s going to take as much hard work that we’ve got inside our bodies.”

DeJear challenged the crowd to make their own list of people to engage to get them to vote.

“These people who you know are not going to exercise their right to vote unless you ask them, because that’s what it’s going to take when we talk about giving 110 percent,” DeJear said. “Finding those people who are hopeless, who believe their vote doesn’t matter and [allowing] them to stand on our shoulders so that they can see and they can believe that their vote is valuable.”

Wahls encouraged young voters to recognize how important the upcoming midterm elections are.

Harris ended the rally by encouraging attendees to head down to the IMU to vote early. Voters registered in Johnson County are able to vote at the IMU Oct. 24 to 26.

“This is a moment in time that is requiring us to fight for the best of who we are and fight we will,” Harris said. “We will do it because we know we are better than this, and there is so much at stake.”