The Daily Iowan sat down with University of Iowa Athletic Director Gary Barta on Oct. 17 to discuss Title IX, life after Kirk Ferentz, and the future of alcohol in Kinnick Stadium. 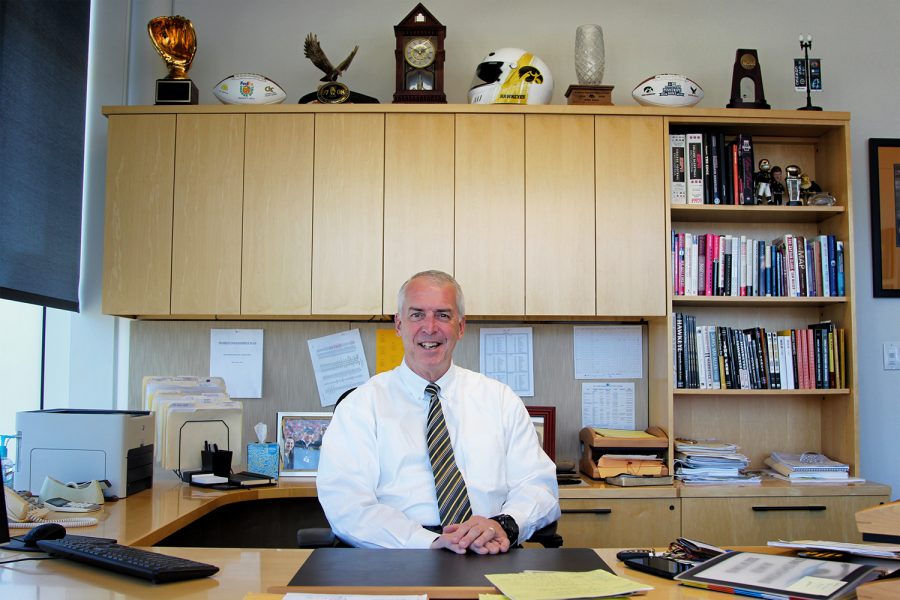 DI: We’ve seen a rise in the success of nonrevenue sports. Volleyball and baseball are quite successful. So are rowing and field hockey. What can this success be attributed to, in your eyes? Was there a conscious change made across the board, or does it just happen to be a result of the teams working and figuring it out on their own?

Gary Barta: I always say to our staff, “Hope is not a strategy,” so we always have been planning. The thing about it is, you can’t just flip a switch.

Let’s use rowing for example. We built a new boathouse about eight years ago now, and with that, we made some other changes in terms of budgeting, in terms of coaching, and it has taken this long, and they’re doing an incredible job now, but to be ranked in the top 15 in the country was amazing. It’s a process, and it takes time, sometimes, to reach that level.

We have great momentum right now. Soccer has won a few in a row, field hockey is ranked seventh in the country, football is 5-1, so it’s intentional, and there are sports where we aren’t there yet. So with those sports, we sit down, and we do a full review of each sport; we look at their facilities, we look at their budgets, we look at their coaching, we look at all the things that matter to make that program better.

Barta: I think they’re both incredibly important, but I think you left out one that I pay close attention to, and that’s their track record in graduating their student-athletes. We have a saying: “Win, graduate, and do it right.”

We go through the same HR process as anyone on campus. We have a search chair, we have a search committee. We always have a faculty member in every coaching search, and then we launch the search, and we’re looking for a person who ultimately has to be able to win, they have to show that they are committed to and have graduated their student-athletes wherever they’ve been.

The last part, fit, is so important. Do they fit our culture? Do they fit the Big Ten approach? Do they fit the University of Iowa approach? In most cases, we’ve been able to pull the trigger right away. In others, we’ve had to keep looking. I’m right now thrilled with the coaching staff we have across the board.

DI: Talking with Kirk Ferentz this summer, he acknowledged that he won’t be the head coach of the football program forever. Is this something you think about in your position? Is there a plan in place or names you’re thinking about who could take over the program whenever Ferentz retires?

RELATED: Closing in on win No. 144: Kirk Ferentz approaches history

Barta: There’s sort of an old axiom in the athletics world that the athletics director always has two or three résumés or names in their back pocket. It’s not quite that literal, but I’m constantly looking — not just with coaches — I’m constantly looking at talent across the county. I’m looking for people who would fit our culture, people who personify the “win, graduate, do it right.” I take mental note of those people whether it’s a head football coach, or a head coach for another sport, or even a senior staff member. I do the same thing. The answer is yes, sort of. I don’t have a literal list of names in a file somewhere, but I’m constantly looking for people who would fit our culture for when someday — hopefully, it’s a while from now — when Kirk decides to retire.

DI: With Fran McCaffery’s extension, there wasn’t any announcement, and it came across to a lot of people as secretive. What all went into that, and what sort of transparency should the Athletics Department have when it comes to these sorts of decisions?

Barta: Generally, athletics is probably the most audited or watched-over program on the campus. Truly, we have nothing to hide. We receive dozens of requests for information all year long, and we’re constantly providing that. The transparency is there.

The situation with Fran, I would say a couple things. First of all, he and I were working on his contract in the summer. Then I was diagnosed with cancer, and I went through a process where we didn’t finish the process while I was sick and going through the recovery. Then I came back to work in late October and wasn’t fully healthy until November. One of the things I don’t like to do, I never like to have contract discussion with coaches in the middle of a season. But I had made some promises to him in the summer, so I decided to finish the contract to fulfill what we had agreed upon in the summer, and then I just made the decision that I didn’t want to disrupt the season at that point. There was no conspiracy. In hindsight, had I known it would create as much angst as it did, I would’ve just released it. It really wasn’t a huge change in his contract, just an extension. So there was no conspiracy and when someone asked for it, they received it. We weren’t trying to hide it.

DI: Athletics has contributed $4 million to the funding of the academic side of the institution in the previous two fiscal years. What is your perspective on how athletics can best support academics, and how much should the department contribute to that side of the university?

Barta: The Athletics Department’s budget is self-sustaining so there are no general-fund dollars, there are no student fees. It’s 100 percent generated by fans, and fundraising, and TV revenue. You’re making mention of something that started a couple of years ago. President Harreld and I sat down, and we had a new TV contract coming forward. We’ve been quote/unquote contributing back to the university for a number of years. It’s a little more than $20 million a year that makes its way from athletics to the central campus.

I’ll give you an example. Some people assume the scholarships we have for our student-athletes are just waivers, or at some places, they have the out-of-state student-athletes pay in-state tuition. That’s not the case here. We transfer over about $12 million every year in scholarship support from the Athletics Department to central campus for their scholarships, we pay for all of our light bills, everything we do in athletics. In addition to that, the most recent addition, we’ve now contributed $4 million over the past couple of years to the general fund, and we plan to do another $2 million this year, and we will do it as long as we’re able.

When it comes to where, what types of areas, we’ve sat down with our senior team and a couple of coaches, and we talked about what are the areas that make the most sense. A couple of them are alcohol harm-reduction initiatives. Diversity, we are committed to doing some things for the cultural houses. One of the things that makes the most sense to me is that we have a great relationship with Recreational Services. We share some space. We’re making some contributions in the general fund back for general students, not just student-athletes but general-student wellness and recreation.

DI: The DI recently ran a feature on Christine Grant, a champion of Title IX. Do you think that after the legal situation with Jane Meyer, the UI is where it should be regarding policies surrounding Title IX? Where and how do you think the university can improve if you think it needs improvement still?

Barta: In every area of our department, we want to get better. We’re constantly looking to get better. Are we in a good place in terms of gender equity and Title IX? Absolutely.

The Office of Civil Rights has been here. They requested tens of thousands of documents several years ago. They were on campus with five investigators during that time period, and each time they come back to us, we’ve cleared most of their areas of investigation. They’ve had a couple more where they’ve asked for more information, and we’re sharing that with them. If we find anything where they feel like we’ve come up short, we would certainly address them, but I feel great about the opportunities we give all of our students, whether it’s male or female, football or tennis, basketball or golf. I feel really good about the experience our student-athletes are having at Iowa.

DI: As far as alcohol sales in Kinnick go, what sort of talk has there been on that? As of right now, alcohol is not sold to the general public. Do you think that will that ever change? And have you heard much of a push from fans?”

Barta: What I’m seeing across the country is a trend toward more and more arenas and stadiums selling beer and wine to their fans in the stadiums. We visited a couple of stadiums already, one this year that sells to their fans. I think what I shared at the Big Ten media day was we won’t be the first, we likely won’t be the last. I feel at some point, and what it is going to be related to is the fan experience. One of the things we are spending huge amounts of time on is the fan experience. We’ve put in new video boards, we’re redoing the north end zone of Kinnick Stadium. We are constantly looking at creating club space, and wider seats, and doing anything we can to make the fan experience better.

RELATED: Weigel: In heaven there is no beer

The sale and consumption of beer and wine is probably coming some day. It’s not something that would be done for a revenue move, but it would be done at some point just because if it’s being done everywhere else and for the fan experience. My personal approach on alcohol is safe, legal, and responsible. If you’re safe, legal, and responsible, the use of alcohol is not a problem. Where it becomes a problem is when somebody abuses one of those areas. So it’s not on the books. It’s not in the near future plan, but someday, I could see it because of the fan experience.