This week’s Kid Captain 14-year-old Christopher Turnis has spent more than 1,000 nights in the hospital. 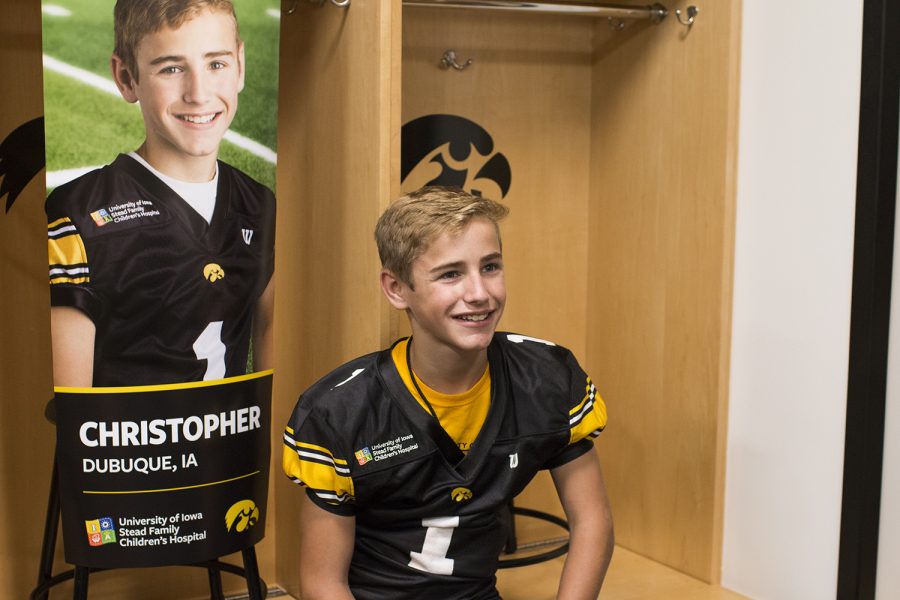 Kid Captain Christopher Turns smiles front of his banner during Iowa Football Kid's Day at Kinnick Stadium on Saturday, August 11, 2018. The 2018 Kid Captains met the Iowa football team and participated in a behind-the-scenes tour of Kinnick Stadium. Each child's story will be featured throughout the 2018 Iowa football season.

When Christopher Turnis was born, doctors predicted he might not live for more than an hour after birth.

Fourteen years later, Christopher, from Dubuque, will serve as this week’s Kid Captain for Iowa’s Homecoming game against Maryland.

Kristina Turnis found out when she was 30 weeks pregnant that there was a blockage causing damage to Christopher’s kidneys, bladder, and ureter. He was diagnosed with posterior urethral valves, an abnormality in the urethra that prevents urine from properly leaving the body.

“We were told at that point … if he lived, he probably wouldn’t live more than an hour,” Kristina said. “But if he did, things would be very difficult, and his health wouldn’t be the greatest. That’s when our relationship with the hospital started.”

RELATED: 2-year-old Kid Captain thrives with the help of an altered diet

Christopher, who was born at the UI Children’s Hospital at 34 weeks, had his first surgery at just 2 weeks old.

As he grew, he continued to struggle with ongoing issues of vomiting, diarrhea, fevers, and dehydration. At age 3, Christopher was diagnosed with eosinophilic esophagitis, a rare digestive system disorder that includes swallowing difficulty, vomiting, and heartburn.

Because of his condition, Christopher has a very limited diet and relies on a hypoallergenic amino acid-based formula distributed through a G-tube to receive nutrients. The only foods he is able to eat include rice, potatoes, eggs, strawberries, blueberries, and beef.

In 2010, Christopher’s health again began to decline because of damage to his kidneys. Kristina said they knew eventually he would require a kidney transplant.

“He turned 6 on Sept. 30, 2010, and when he blew out his candles, he wished for a new kidney, and exactly a week later, he was in the OR getting that new kidney,” she said. “It was a huge blessing and probably one of the best birthday gifts he is ever going to receive.”

Christopher has undergone more than 46 surgeries and has spent more than 1,000 nights in the hospital.

“It’s been fun to see him grow, and develop, and then actually be able to care for him,” Merrill said. “… Having that insight of knowing him so well [is] kind of almost a comfort for both of us when I get to take care of him in that both he and mom are like, ‘Oh great, Kyle is on. He knows us.’ ”

Merrill described Christopher as spunky, fun-loving, and mature. He said that his relationship with Christopher definitely affected his career choice — specializing in pediatric nephrology and pediatric kidney disease.

“He wanted to be a doctor, and we were like, ‘You should go into nephrology so you can be one of my doctors,’ and he was like, ‘I’ll get right on that,’ ” Christopher said. “He’s basically like family.”

Christopher is a member of the Stead Family Children’s Hospital Youth Advisory Council and wants to be a kidney doctor when he grows up.

“That speaks to the wonderful care that we get from the Stead Family Children’s Hospital and the influences the people there have had on him,” Kristina said.

Christopher said he is excited to walk out on the field as Kid Captain on Saturday.

“It’s a very big honor for me to be Kid Captain … and to be picked out of all the kids who have applied for it,” Christopher said.