The Iowa City Historical Preservation Committee said the Ped Mall is historically significant. Now, it is up to the community to decide if it is worth putting on the national landmark registry. 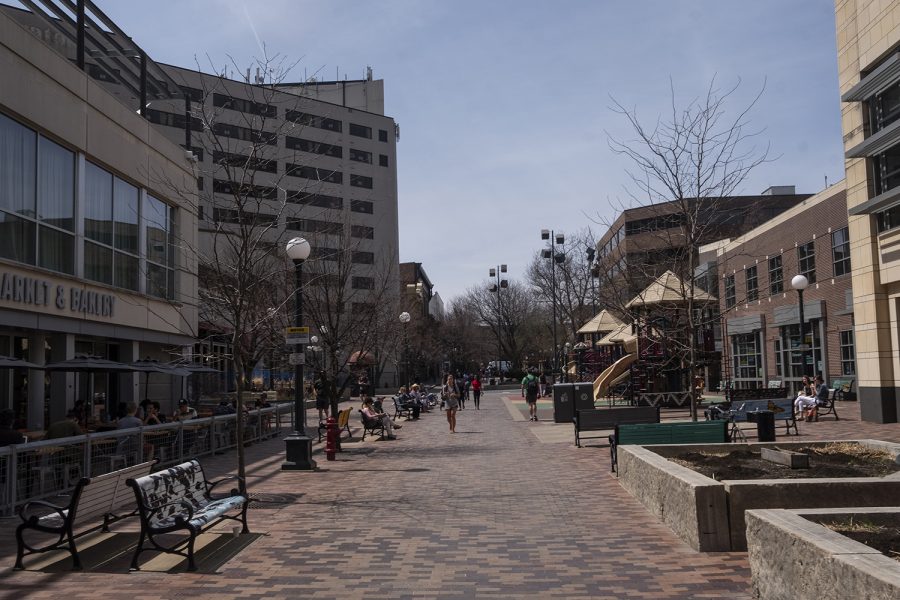 People walk in the Iowa City Pedestrian Mall on Thursday, April 26, 2018. Iowa City has released plans for renovations and updates to the area.

The city of Iowa City may seek recognition for the historic status of the Pedestrian Mall if community members agree it should receive such a designation.

The proposed area includes space from Burlington to Jefferson Streets and Clinton to Van Buren Streets, which, of course, includes the Ped Mall.

Jessica Bristow, the historic-preservation planner for Iowa City, said there are two types of historic registries: local and national.

“For a National Register listing, there are no restrictions or regulations,” Bristow said. “It’s an honorarium.”

Bristow said benefits of having a building in the National Historic Registry include receiving state and federal tax credit and tax exemption for rehabilitation work on the building.

Joe Tiefenthaler, the executive director of FilmScene, said there is a lot of planning still to be done, but the idea of a historic preservation seems to have benefits.

“Preservation designations are a wonderful thing, and I look forward to see what it could do for our community,” he said. “It seems like a lot of businesses could benefit from it, but it is still too early to tell what the impact could be. We are keeping our eyes open and our ears out.”

The Packing and Provision Plant — the building that includes FilmScene — has an immense history by itself, said Tiefenthaler and Bobby Jett. Jett works at Moen Group and has an interest in the history of Iowa City’s buildings, including the building housing TCB Pool.

On the second floor, caskets were made and taken downstairs for the bodies of the dead, which would be wheeled across what was once the bricks of the Ped Mall, Jett said.

The proposed area also includes the Savings and Loan Building, where Raygun was formerly located. The building may not look old, Jett said, but the location used to be a hotel and later an opera house.

The block of Dubuque Street containing Prairie Lights was the original downtown Iowa City where saloons were located, Jett said.

Jett said many people have thought of registering the area as a historic district, but problems arose concerning the number of people who own the buildings.

“It could be controversial, because Iowa City downtown is an anomaly,” Jett said. “All of the families’ [buildings] are owned in trusts. Many of these people do not even live in Iowa City, let alone Iowa. You would have to get permission from all the people who own those buildings to sign off on it.”

However, Bristow said, the Ped Mall has unique properties that most cities in Iowa do not have.

“We have a unique situation where our downtown and university are adjacent to each other, that their histories are intertwined and continue to be that way,” she said. “It wouldn’t be quite the unique place it is if they weren’t integrated.”