Benjamin Smart, the executive chef of Big Grove Brewery, was awarded the 2018 Restaurateur of the Year by the Iowa Restaurant Association. 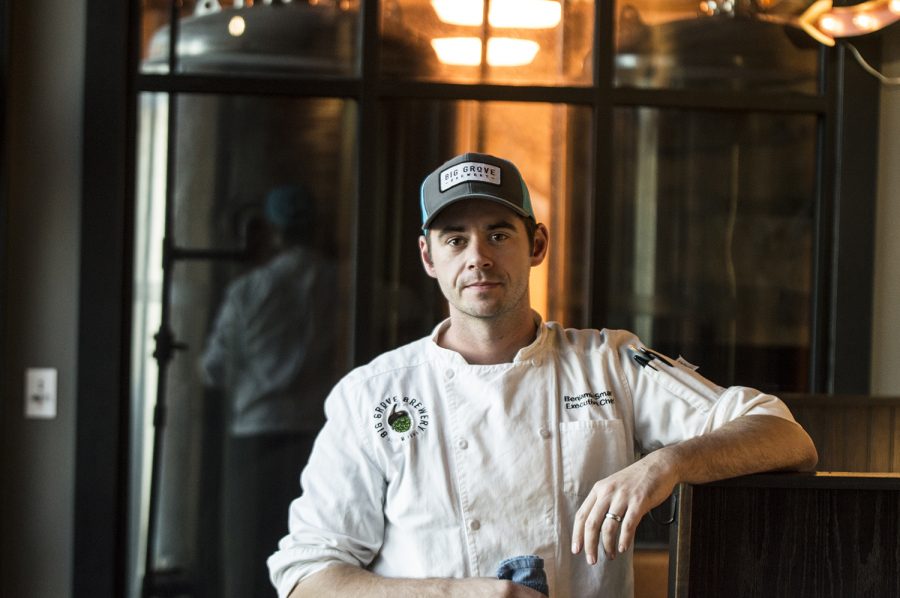 Chef, Ben Smart poses for a photo at Big Grove Brewery in Solon Ia on Wednesday, October 17th, 2018. Smart had just opened up a new menu at the for the public.

Benjamin Smart, the executive chef and partner of Big Grove Brewery, was recently named Restaurateur of the Year by the Iowa Restaurant Association.

Smart said he received a call out of the blue one day that he had been nominated for the award by one of his peers.

“I am one of a handful of people in the restaurant,” he said. “I like to surround myself with the best and most driven people I can find. I am just honored to be a small piece in what shapes the culinary landscape.”

Smart stressed the importance of the award not only being representative of his personal achievements but also those of his team and everyone who has gotten him to this point.

Jessica Dunker, the CEO of the Iowa Restaurant Association, said the members were happy to award Smart for all his hard work throughout the years.

“When you are selected as the restaurateur for Iowa, it is not just about great food, it’s about the community and conducting your business in a way that reflects that,” she said.

Smart grew up in Iowa City and was an undergraduate at the University of Iowa. He then attended culinary school at Kirkwood Community College in Cedar Rapids. He worked briefly in Iowa City before moving to Seattle to work at a restaurant named The Herbfarm.

A family friend, Doug Goettsch, called Smart one day to see if they could start a pub together, pulling Smart back to Iowa.

After accepting the offer, Smart moved back to Iowa to begin his new adventure. Big Grove Brewpub opened in 2013 in Solon.

“He is an amazingly talented chef who has helped push the culinary scene forward in the Iowa City area. He has a passion and drive that constantly amazes me,” Goettsch said. “Personally, I can say this: The only thing that outshines his talent is his work ethic.”

Since then, the team has opened Pullman Bar & Diner and Big Grove in Iowa City, and remodeled the former Atlas Restaurant into St. Burch’s Tavern.

UI senior Alyssa Jepson, a frequent Big Grove customer, said she goes to Big Grove nearly every week and loves what the restaurant has to offer.

“What I really like about Big Grove is that the food is unique in its own way,” she said. “Much of the menu is typical American-style food but with a different twist to it. The ingredients are always fresh, which is a nice change of pace.”

Jepson said she will continue to frequent Big Grove with her roommates and friends, and she encourages others to do so as well.

Smart said he was honored to be considered for Restaurateur of the Year.

“I feel like, as people, we are always [heading] down in business, continuing to move and problem-solve,” he said. “It is not always easy to take the time to reflect upon what has been done. This whole process has been cool to take that time, and I am very appreciative.”