Students, faculty members, and Iowa City community members gathered at the Pentacrest to protest the UI’s decision to defund the Labor Center. 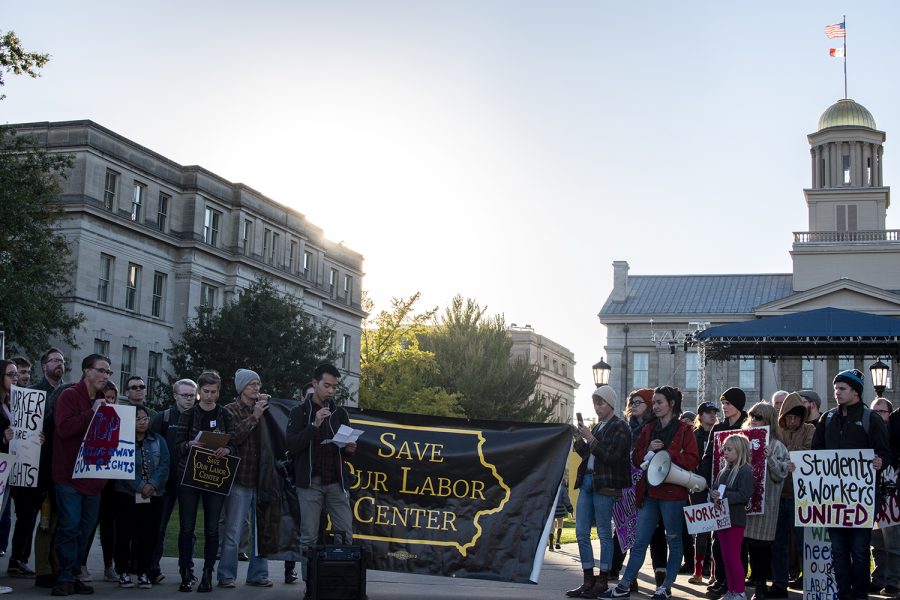 Community members gather on the Pentacrest to protest the closing of the Labor Center on Wednesday, Oct. 17, 2018.

Students and workers gathered on the Pentacrest Wednesday evening to show their support for the Labor Center, in part calling for clearer communication and stronger representation in the decision to close the center.

The decision to close the center has been criticized by some for lacking involvement from shared-governance leaders, raising questions on the significance of shared governance at the University of Iowa.

Most recently, the UI Faculty Senate released a statement commenting on what the members said was a lack of faculty representation in the decision-making process, suggesting it runs counter to the shared-governance values the institution has promoted.

“Principally, the problem lies with the lack of collaboration and communication with the faculty which has obscured what should have been a transparent — and shared — process,” the statement said.

A Shared Governance Advisory Task Force on Academic and Research Centers, Institutes, and Activities has been created, including  deans of various colleges, UI professors, and the presidents of both the UI Student Government and the Graduate/Professional Student Government.

The Faculty Senate’s statement said the task force was created to review recommendations for center closures and give the decisions a diverse perspective from students and faculty.

UI President Bruce Harreld told The Daily Iowan on Oct. 12 that the centers were being funded with two-thirds of the money coming from students’ tuition, but he said officials felt it was inappropriate to use that money to fund the centers.

Harreld said faculty conducted a study in 2004 that contained a list of centers that should be closed. This list was updated in 2010. The next step would be figuring out the life of that list and how often it should be updated, Harreld said.

“… I had to do something to get the budget under control,” he said. “I made a decision. I take responsibility for it.”

Participants in the rally signed a petition that was delivered to the President’s Office and UISG. The petition urged Harreld and student-government leaders to consider the importance of the Labor Center, because it has played a key role in promoting equality and respect for workers for years.

The statement called for UISG’s support to represent interests to the UI administration. It demanded that both Harreld and UISG meet openly with students and UISG members to discuss the effects of defunding the Labor Center.

Iowa City City Councilor Mazahir Salih said the rally was organized by students to express the importance of the Labor Center at the university.

“It is the only one of its kind in the state of Iowa, it is helping a lot of people, whether they’re students or workers, across 99 counties in Iowa,” she said.

“When we founded the Center for Workers’ Justice, we were ready, but we did not have the tools,” she said. “We got those from the Labor Center through the short courses that they teach for nontraditional students.”

Anna Clowser, the president of UI Students for Human Rights, said the Labor Center is a source for university students and workers for leadership, training, and education.

The State Board of Regents is expected to vote on the UI’s proposal to close several centers in November.