UI physics professor Yannick Meurice is recipient to $1.3 million from the U.S. Department of Energy to study the foundational aspects of quantum computing. 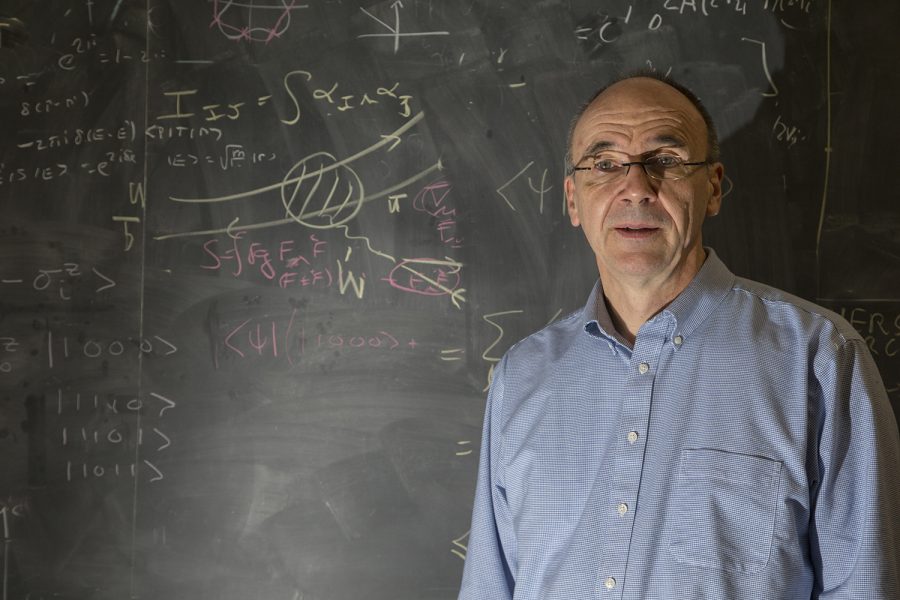 Yannick Meurice, professor in the department of Physics and Astronomy, poses for a portrait in Van Allen on Monday, Oct. 15, 2018. Meurice has been awarded a $1.3 million grant from the U.S. Department of Energy to study foundational aspects of quantum computing.

Meurice works in particle physics, specializing in the strong interactions among atoms. Such research requires large-scale computations that cannot be solved with ordinary computers.

“The grant is to find new methods for applications of quantum computing in particle physics,” Meurice said. “It came like a gift.”

Quantum computing deals with the collision of protons and the step-by-step process of how those particles form.

“When particles are very dense, there are complications,” Meurice said. “In quantum computing, the goals are the same, but the techniques are very different.”

“This is going to be a whole new branch of research at the university,” Skiff said. “It’s an exciting development.”

In regard to the U.S. competing with other countries, Meurice said many other nations have already began researching quantum computing.

“There is an effort to move in this direction,” he said. “Other countries are doing pretty well, so we have to take a leadership position.”

Meurice emphasized that this research relies on fellow professors across the nation, at such institutions as the University of Maryland, Massachusetts Institute of Technology, and Michigan State University.

“It’s a multi-institutional effort,” Meurice said. “There are people who do computer science, some who work on string theory, and the rest work on strong interactions.”

Because the grant is only valid for a minimum two years, Meurice said, the research must be prioritized. He makes sure people are working together, and a grant monitor keeps track of their progress.

“We have a lot going on, so there’s always going to be a back burner,” Meurice said. “You have to make sure people keep that work on their front burner.”

In an effort to propel Meurice in his research, Skiff and the department aim to help and give Meurice the space to do what he needs.

“He’s been catapulted into the light as the principal investigator on this grant,” Skiff said. “We’re thrilled about it. He’s carrying the ball here and networking with people all over the place.”

For Meurice, this means approaching from the angle of establishing and using a quantum computer.

“The research project is very hard, but Yannick is the kind of person who has a good understanding of theoretical physics,” UI Physics professor Vincent Rodgers said. “He has been working on this all of his research life.”

In terms of participation at UI, Meurice and Rodgers are two of four people involved in the theory group, accustomed to working on long-term projects and big grants.

“We have a camaraderie where we may all work on different things, but we’re also able to communicate,” Rodgers said. “One of the advantages of working at UI is that we allow theoretical-physics scholars to work comfortably at their pace.”

RELATED: UI experiments on board NASA’s trip to the sun