National Democrats, including Sen. Jeffrey Merkley, D-Ore., talked about their efforts to flip the U.S. House and the importance of voting in local elections in visits to Iowa, which hosts the first-in-the-nation presidential caucuses. 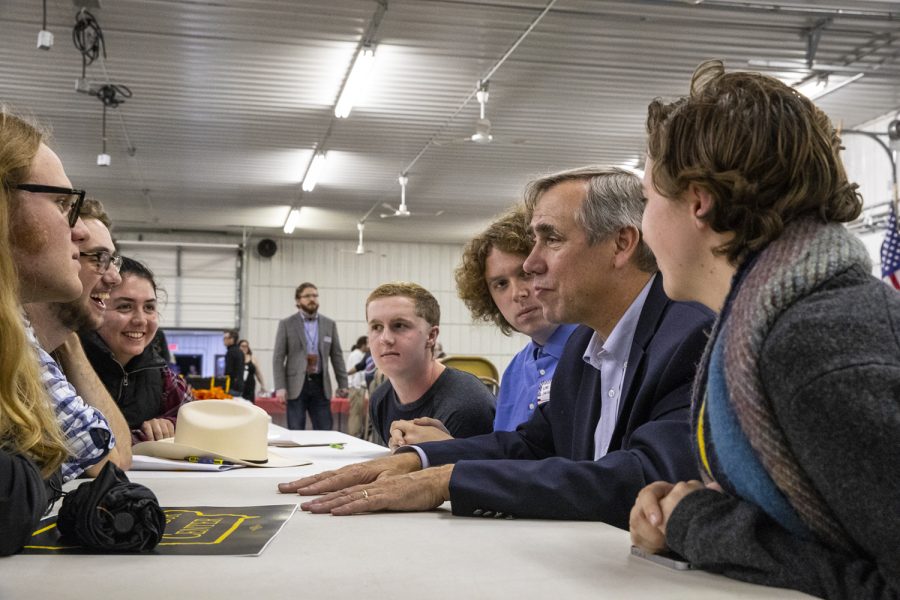 Sen. Jeff Merkley, D—Ore., speaks with the University of Iowa College Democrats at the Johnson County Democratic Party Fall Barbeque. Merkley was part of a collection of both state and national politicians who spoke at the event.

A list of national Democrats, including Sen. Jeffrey Merkley, D-Ore., encouraged Johnson County Democrats to cement a “blue wave” in the midterm elections at a barbecue hosted by the Johnson County party on Sunday.

National Democrats have been traveling to Iowa from all parts of the country to engage Democratic voters.

Although few have formally announced a 2020 presidential run, Iowa will host the first-in-the-nation presidential caucuses, and national Democrats who are expected to consider a presidential run — such as Sens. Kamala Harris and Cory Booker and attorney Michael Avenatti — have visited or scheduled visits to Iowa.

Among the guests at the Johnson County event, which drew hundreds of people were Merkley, Washington Gov. Jay Inslee, and Rep. Tulsi Gabbard, D-Hawaii.

Andrew Yang, a New York businessman who has already declared his candidacy for 2020, spoke as well.

Merkley said that when he was campaigning for the Senate in Oregon, others helped him campaign from other states, so he came to return the favor and rally the “blue wave.”

“If we help each other, we can have the best possible effect, and we desperately need to pivot from the situation we are in right now,” Merkley said. He also visited Iowa in September, when he headlined the Progress Iowa Corn Feed, and he made stops in five other locations across the state.

In his speech Sunday, Merkley condemned Republicans on the Senate Judiciary Committee for their handling of the confirmation hearing for now-Supreme Court Justice Brett Kavanaugh, saying the committee members did not stand up to the Trump administration when it originally wanted to withhold 100,000 documents from the committee’s review.

Merkley spoke with the University of Iowa Democrats at the end of the event and described his experience in the Senate and helping build a Democratic majority in the Oregon Statehouse.

UI Democrats President Hunter Staszak said it was interesting to hear that Merkley flipping his Statehouse blue could translate to the Iowa Statehouse in November.

“[Merkley’s] focus right now is in helping [U.S.] House candidates, because he sees the House as more ‘flippable,’ ” Staszak said.

Gabbard is one of four female combat veterans to serve in Congress. Another is Sen. Joni Ernst, R-Iowa.

Running for re-election to a third term, she traveled to Iowa several weeks ago to talk with Iowa veterans and Rep. Dave Loebsack, D-Iowa, who holds the 2nd District seat.

In her speech, she said love is a driving factor when thinking about such policies as minimum wage and health care.

“Whether I’m coming from Hawaii and you’re from Iowa, no matter how you choose to worship, who you choose to love, or where you come from, we are all interconnected based on these common principles and values of our humanity,” Gabbard said.

“There are a lot of important races in Iowa that could make the difference on specific policies,” she said, pointing to the secretary of state and Statehouse campaigns.

Inslee serves as the chair of the Democratic Governors Association, and he stopped in Iowa to help rally support for Democratic gubernatorial candidate Fred Hubbell. He made two other stops on Sunday, in Poweshiek and Washington counties.

Inslee said that Hubbell shows commitment on such issues as clean water, health care, and education, all of which are important to, specifically, college-age voters.

He said that he finds young voters to a scientifically literate generation who understand the effects of climate change and other environmental concerns.