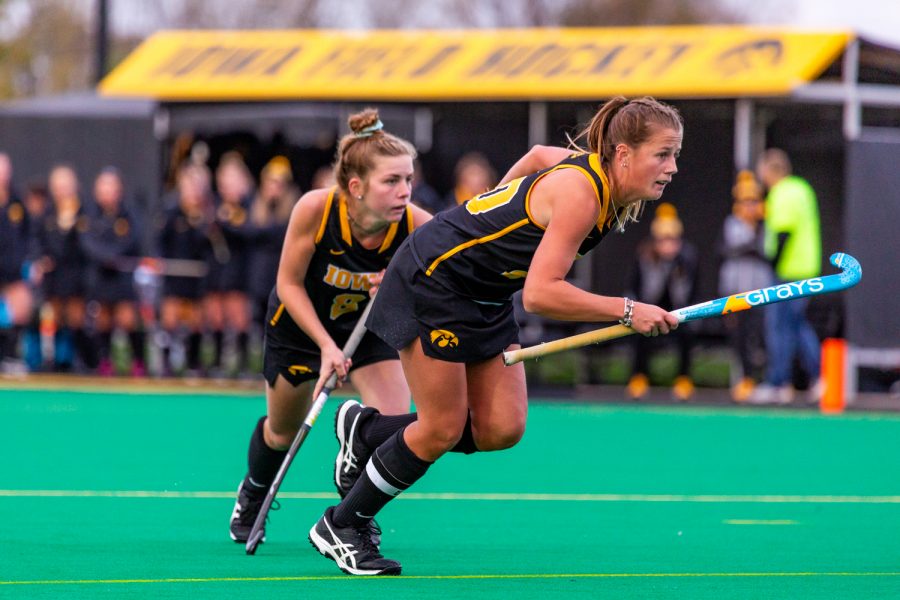 Iowa midfielder Nikki Freeman and Iowa midfielder Sophie Sunderland sprint off their line during a penally corner during a field hockey match against Penn State on Friday, Oct. 12, 2018. The No. 8 ranked Hawkeyes defeated the No. 6 ranked Nittany Lions 3-2.

The Hawkeyes came out strong against Maryland in the first period Sunday, tallying 3 penalty corners in the first 12 minutes, but their momentum fell short just before half, and Maryland’s Brooke DeBerdine ended the scoreless match two minutes before halftime.

Sophomore Ellie Holley scored the equalizer for the Hawkeyes in the 11th minute of the second half, assisted by Maddy Murphy. But the Terrapins went up, 2-1, three minutes later when Madison Maguire put a shot in the back of the net.

The Hawkeyes were forced to play 10-on-11 for a total of 17 minutes in Sunday’s match. In the first half, junior captain Sophie Sunderland had to sit out for two minutes in the first half, then five more in the second after being hit with a yellow card. Junior captain Katie Birch also got a yellow card about six minutes after Sunderland and had to sit out 10.

“We can’t play down for 17 minutes,” head coach Lisa Cellucci said. “The cards really hurt us today. With all of the things that didn’t go in our favor, we still had a lot of momentum and still controlled parts of the game. Our penalty-corner execution has to be better, and we have to limit our fouling — that was a big piece of it today.”

“We’ve got to capitalize on our penalty corners,” Holley said. “We got to make sure that when we’re winning them that we are using them and scoring goals. We had many shots, but we need to get that ball in the back of the goal. Together, we need to stay connected, especially on transition. Organization on defense needs to improve, and that’s probably what we’re going to work on this week.”

“It feels so surreal,” she said after the game. “We haven’t had a win like that in forever. Everyone played so well as a team and after they beat us, 5-1, last year, to come back from that is outstanding. I couldn’t be happier.”

The Nittany Lions put the ball at the back of the net after Murphy’s first and second goals, ending the game, 3-2, but Penn State never led in the match.

The Hawkeyes now hold a 12-4 overall record a 4-3 conference record. In the past two weekends Iowa has played four top-21 teams, three of which were in the top-6. Iowa went 2-2 against these opponents.

“Our goal was to go 4-0, but it was great to get some wins out of that,” Cellucci said. “That’ll help propel us forward in the national conversation. We needed this one today. I think we’re building and building, and we have to go get Rutgers next weekend. It was great to be home for two weeks, and not have to travel, and to get these quality opponents on Grant Field.”

Iowa will travel to Piscataway, New Jersey, to take on No. 14 Rutgers on Friday for the final regular-season matchup.