Sophomore Maddy Murphy recorded a hat trick to lead the No. 8 Iowa field-hockey team to a victory over No. 6 Penn State. 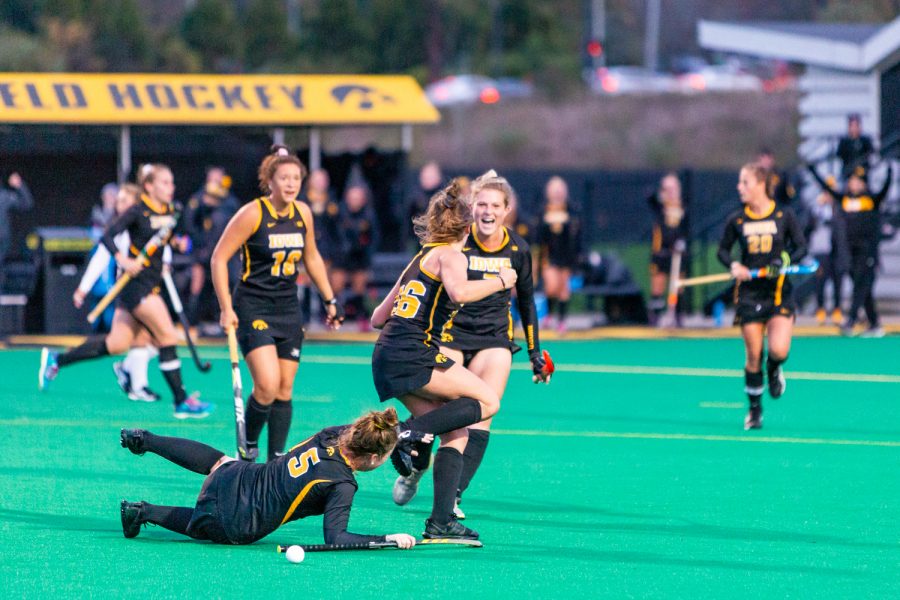 The No. 8 Iowa field-hockey team defeated No. 6 Penn State thanks to an outstanding performance by one of its main playmakers.

Iowa controlled the first period of the match, keeping the Nittany Lions from having a single penalty corner or any shot for the entire first half. Meanwhile, the Hawkeye offense tallied 8 shots and was awarded 4 penalty corners. With 11:25 left in the first half, sophomore Maddy Murphy put 1 goal away — unassisted — sending the Hawkeyes up 1 going into the half.

Penn State came back to fight in the second, scoring the equalizer two minutes in. The match went back and forth, but Murphy capitalized again in the 52nd minute on a pass from freshman Lokke Stribos. The Nittany Lions didn’t go down without a fight, though, and scored four minutes later to even the score again. With only two minutes left, Murphy scored her third goal of the match — her first career hat trick — to lead the Hawkeyes to victory.

“I was just at the right spot at the right time, some great passes across the circle,” she said. “Our defenders had a really strong performance, and they were able to give our strikers a lot of balls in.”

The Hawkeyes avenged their 5-1 loss to Penn State from last season with the 3-2 upset, outshooting the Nittany Lions, 14-8.

“[I] couldn’t be more proud of the team,” head coach Lisa Cellucci said. “We stuck to the game plan, we chipped away. We said we might bend, but we’re not going to break, and we absolutely did not break tonight. This was a fantastic win at Grant Field under the lights. It couldn’t be a better night.”

Iowa will continue its Big Ten play against No. 2 Maryland at noon Oct. 14.

“I think this is just a testament to how hard we’ve been training and how much we’re focused,” Murphy said. “Everyone wants it so bad, and you can just see it on the field. Everyone’s putting in 110 percent every single game, and the wins are coming, so everybody better watch out.”