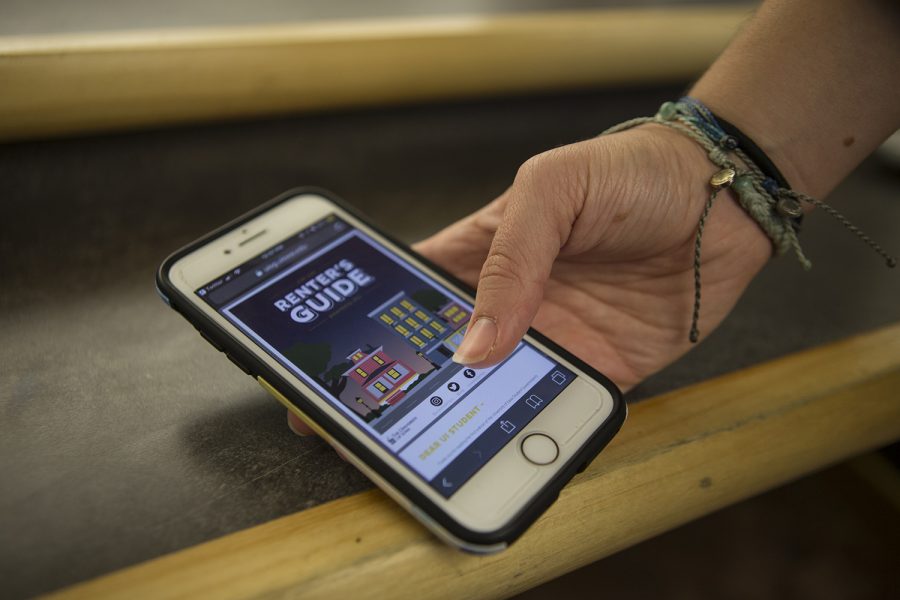 The UI Student Government 2018-19 Renters’ Guide was released this week, revealing the results of a survey administered to students about their off-campus housing experience in an effort to aid students’ decisions about when and where to live off-campus.

The survey, distributed last spring, inquired about students’ experiences during the 2017-18 school year. The guide will allow students to compare landlords and property management companies when making decisions about their future housing.

“We’re not saying one landlord is better than the other,” UISG City Liaison Gustave Stewart said. “The idea is that we gather information to relay back to students and put pressure on landlords to improve quality issues.”

Among other results, students who responded to the survey revealed that more than 50 percent of off-campus apartments or houses believed their unit was not clean when they moved in.

“Generally speaking, students living off-campus in Iowa City say that it is generally expensive and might not be the best quality,” Stewart said. “This can be a tool to landlords just as much as students.”

In terms of commitment to off-campus housing, 51 percent of respondents signed their lease November or before, more than a year prior to their move-in date.

“That’s a highly dense number of students,” Stewart said. “One thing that surprised me is just how much the time to sign leases is getting pushed further and further back.”

He emphasized that a major issue in off-campus housing is accessibility to recycling and whether landlords provide bins for residents. According to the Renters’ Guide, 24 percent of housing had recycling, 22 percent had only cardboard recycling, and 48 percent had none.

Recycling, like many other complaints by off-campus residents, was part of a bigger issue. This required UISG to coordinate with an off-campus student advisory committee to collaborate and determine what issues should be included in the Renters’ Guide.

“There’s a lot of advising and counseling when things don’t go well with the landlords,” Student Legal Services Director Christopher Malloy said. “We approached the Renters’ Guide from that end and brainstormed what kind of questions to ask.”

Not included in the guide was the number of students who did not see the return of their security deposits or a copy of their leases.

“We see issues where students, they have not done anything,” Malloy said. “No security deposit, no statement. Every fall, there are students who have disputes with their landlords’ deductions from their deposits.”

In response to the number of students signing their leases a year before moving in, Malloy said it is not unusual for properties to be rented sooner rather than later. Nevertheless, there could be negative effects for students who try to predict where they will be in 10 months.

“A really big part of this is just getting a lay of the land and seeing what the Iowa City housing market looks like,” said Austin Wu, UISG deputy city liaison. “I think a lot of students learn the hard way when they sign a lease their freshman year. Having that information on their side is really important.”