The National Advanced Driving Simulator, which focuses its work on autonomous vehicles and driving safety, celebrated its 20th anniversary with an open house on Wednesday. 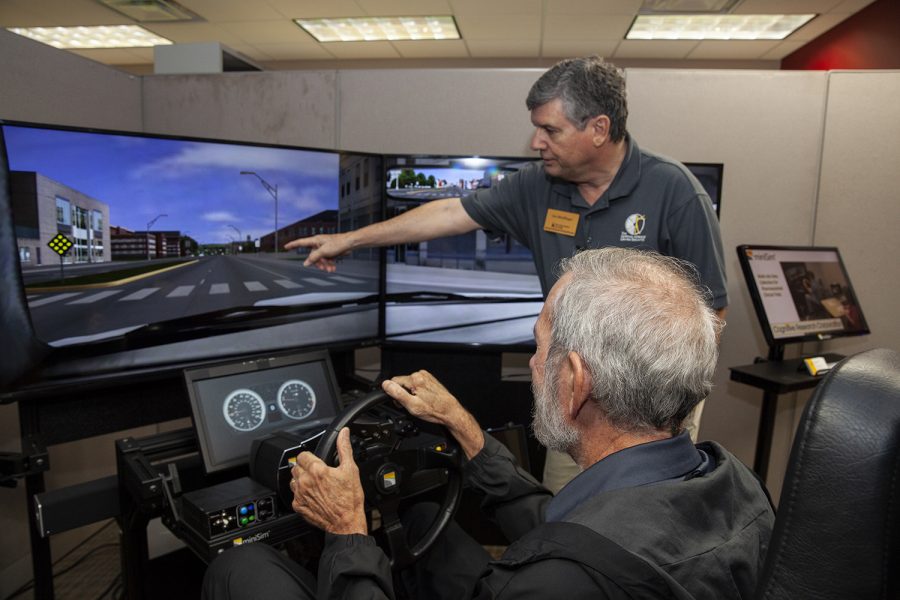 Joe Meidlinger instructs Tom Beaver of Iowa City on the use of a "mini sim" driving simulator during an open house at the National Advanced Driving Simulator in Coralville on Wednesday Oct. 10, 2018. Meidlinger is the program supervisor for the mini sim program. Beaver's son, Greg, a UI senior and mechanical engineering student, works in the mini sim program.

The simulator is nestled in a Coralville business park and focuses its research on such subjects as vehicle-safety systems, driver distraction, connected-vehicle technology, and automated vehicles. The facility is also home to the world’s highest-fidelity driving simulator.

As the children of faculty members tried their hands at various simulators and promptly crashed their digital cars, staffers who have been involved with the facility since its inception had an opportunity to reflect on what it has accomplished over the past two decades.

Senior Research Associate Cher Carney said she got involved with the simulator after conducting driving research while in graduate school. Her research before coming to the University of Iowa included teen driving safety; it now focuses on the autonomous features of Tesla cars, among other topics.

“With Tesla, we were looking at autonomous commutes and what drivers felt comfortable doing while using the features,” she said. “Now what we’re looking at is the lane-change feature in the Tesla and if drivers feel comfortable using this feature … in the past, there has been a lot of emphasis on simulated scenarios, but that’s changing.”

“So right now, we’re working with the Lincoln MKZ and implementing live programming, basically monitoring all of the functions the car has in real time,” Cable said. “We can see things like system health and switch back and forth from autonomous control to GPS control if the car is weaving in and out of lanes, for example.”

Cable said in the future, vehicle-to-vehicle communication will play an important role in not only personal vehicles but also in fleets of commercial and farm vehicles. He said one obstacle to overcome, however, is the current range vehicles can communicate with each other, which is too short for commercial application at the moment.

“I deal a lot with the integration of sensors,” he said. “We’ve done a lot of studies over the years as the technology has been added, or even before it’s been added, to vehicles in order to see how these technologies adapt to different scenarios.”

In addition to vehicle-to-vehicle communication, Cable said, monitoring the live programming of vehicles can be strenuous at times, but it helps paint a clearer picture of a vehicle’s internal mechanisms and how it adapts to the road.

Senior Research Engineer Chris Schwarz, a team leader for simulation software, said he has seen a lot of development in the years he has been involved with the simulator.

“I think the biggest change I’ve seen is the type of research we’ve done,” he said. “Twenty years ago, we were more focused on things like hard steering and hard turns. Today, of course, we’re more focused on topics like autonomous automation.”