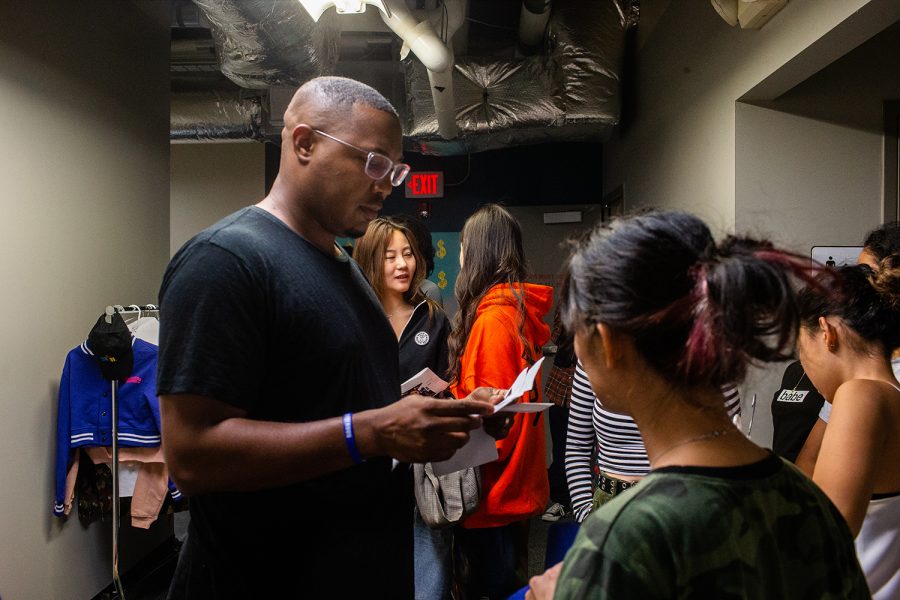 André Wright speaks to models for his clothing line “Born Leaders United” during a practice run on Oct. 4, 2018. Wright’s clothing line will premier among others during the “Alley Fashion Extravaganza” on Oct. 12, as part of the Witching Hour festival.

In a twist of browns, greens, burgundies, and deep reds, models strut down the runway. They walk with a powerful rhythm and unwavering confidence. For some, it’s their first time. Others have been doing it for years. In this scene, simple streetwear becomes art, giving students the opportunity to show off their passion for style.

Clothes designer André Wright will put on the Alley Fashion Extravaganza as part of the Witching Hour Festival. Models will walk in the alley near Linn Street, next to the Iowa City Public Library. On Friday, the fashion show will start at 5 p.m.

“The show stands for ‘unseen,’ and it’s about voices that don’t get heard or seen,” Wright said. “It’s a very diverse show. The clothes are really interesting, streetwear in its finest form.”

For model Hannah Duncan, this is nearing her eighth show with the fashion designer.

“I love the runway,” she said. “I always get jitters at first, but as soon as I hit the runway, and catch my stride, and see the audience and the crowd, it’s like nothing else.”

Duncan believes Wright’s work to be unique for many reasons.

“Whether it’s collecting donations or the cost of the tickets going to a charitable foundation, it’s always for a good cause,” she said. “It’s not just the superficial fashion. There’s always an idea and a force behind it.”

Having worked with him since 2016, Duncan is familiar with the spectacle that will be delivered.

“André is definitely consistent in this area, always having fresh ideas and new looks,” she said. “It’s always a dope experience to work with him.”

However, many of the models in the show are fairly new to the fashion-show scene.

“A lot of the models who we have in the show have never modeled before, so it’s perfect for them,” Wright said.

One of the less-experienced models is Davi, a rapper and former model for Uprising Magazine who said he is taking a break from music and is returning to the fashion world for now. He described Wright’s show as “really bold.”

“It’s exciting, it’s nerve-breaking, it’s pure bliss, really,” Davi said. “If you truly love it, then that’s what it feels like.”

Despite his previous modeling experience, this is Davi’s first time walking in a fashion show.

“I’ve only walked in my bedroom, but I always knew that I would know how to do it when the time came,” he said.

Another of the new models is Lillian Smith, who has had no previous modeling experience of any kind.

“I don’t know how to walk, so that’s going to be a last minute type of thing,” Smith said. “Shoulders back, one foot in front of the other. That’s what I’m going to do and hope for the best.”

“I basically help stylists with collection, and I’ve been taking photos for him,” Lusala said. “I really enjoy it. I think I am doing one of the coolest things that a 17-year-old could right now.”

Models and designers alike are excited for the show, because it will consist completely of Wright’s own designs, compared with past shows, in which he worked with other brand owners.

“This will be one of the only shows that I’ve done with André that are all his designs and not working with other designers,” Duncan said. “It’s a brand-new collection that he’s launching for the fall season.”

Wright looks forward to seeing his work come to life, despite the pressure that he may feel.

“It’s just overall stressful because I gotta get along with all these people, I have to coordinate this whole thing,” he said. “I try to keep stuff simple because I want people to believe that they can do it, too, and a lot of people can if they really put their heart into it.”