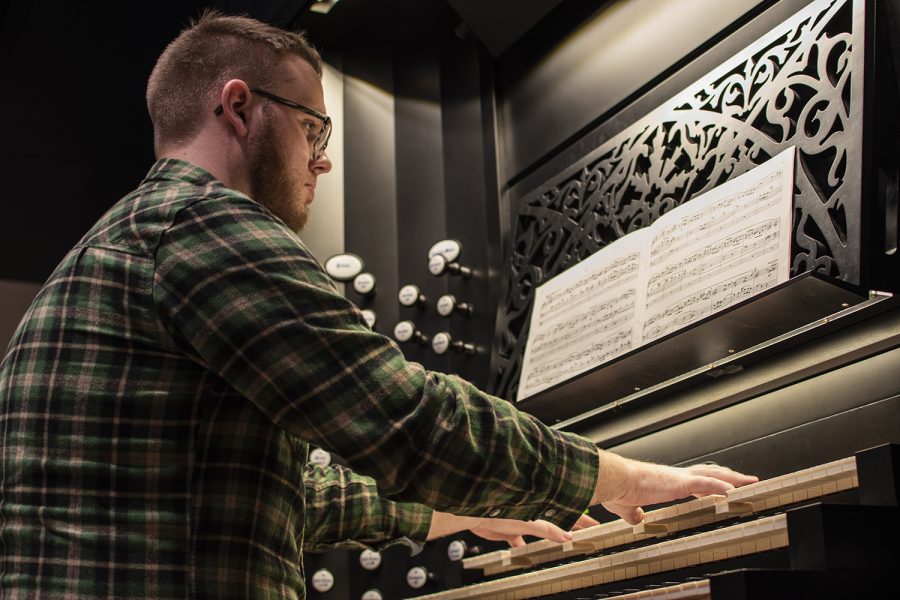 George Oakland poses for a portrait at Voxman on Tuesday, October 2, 2018. He is majoring in Organ Performance. (Thomas A. Stewart/The Daily Iowan)

“What’s your major?” is one of the most commonly asked questions by, and for, college students. One expects the typical answers: pre-med, business, or English. But when someone answers “pipe-organ performance,” more than a few eyebrows are raised.

George Roberts-Oakland is a University of Iowa senior studying pipe-organ performance at the University of Iowa School of Music under the direction of Associate Professor Gregory Hand and Adjunct Assistant Professor Melanie Sigafoose. He is one of four undergraduates in a program that comprises 10 students.

Roberts-Oakland walked up several flights of stairs to the organ platform in the performance hall, an impressively large auditorium with an even more impressive pipe organ at the focal point. The organist played the second movement from Hindemith’s “Second Organ Sonata.” For two minutes, he worked the complex instrument, impressively alternating between its three keyboards, while simultaneously pressing his feet among a large series of pedals. His movements were calculated yet graceful and filled the auditorium with richly layered tones.

Roberts-Oakland’s musical origins began with seven years of piano lessons starting in the third grade and seven years of alto saxophone beginning in the fifth grade. Although he hated learning how to play the piano, his desire to quit, as well as his mother’s insistence on picking up another keyboard instrument, led him to begin playing pipe organ.

“At the time, my church was redoing our pipe organ completely, and our organist thought he should give back to the congregation,” Roberts-Oakland said. “He said he would start teaching students in the congregation how to play pipe organ, and my mom told me, ‘That’s fine, you don’t have to take piano lessons, but now you’re going to take pipe-organ lessons.’ ”

Roberts-Oakland said that was one of the best things his mother “coerced” him into doing. He immediately took a liking to the instrument, appreciating its differences from piano.

“When you press down on a key with the organ, it makes a sound automatically, as long as you have a stop pulled,” he said. “I was like, OK, that’s cool and something completely different. The number of stops you have pulled affects your dynamic, and unlike piano, it doesn’t matter how hard or how soft you touch the keys, it just plays at the same volume.”

Roberts-Oakland also noted a time in which he flexed his pipe-organ knowledge for his classmates in high school.

“In advanced-placement music theory, someone said the phrase ‘pulling out all the stops,’ ” Roberts-Oakland said. “I just went, ‘Oh, you know that relates to pipe organ, right?’ ”

Learning pipe organ was not without its challenges, however. Roberts-Oakland noted its completely different feel. The more immediate key action and lack of a sustain pedal on the organ required him to quickly learn how to substitute fingers. The pipe organ’s elaborate pedal board served as another obstacle for Roberts-Oakland to overcome; pushing the pedals with his feet while playing the keyboards with his hands took a long time for the new organist to perform correctly.

“You really have to separate your lower body and your upper body,” Roberts-Oakland said. “Which is something that most organ players still craft and hone in.”

He seeks to do greater things beyond pipe-organ performance after graduation.

“I got the opportunity to work with a local organ repair/restore guy here in Iowa City,” he said. “And that was pretty much the moment where I went, ‘Oh, I can play organ at a church as a part-time job but then help build or restore organs as my full-time job.’ I had never thought of building organs when I came here, and then that one experience kind of flipped a switch in my head.

“That would pretty much be my dream-come-true.”

He noted his love for physics and mathematics and the opportunity to pair that love with his passion for pipe organ. After graduation, he hopes to work for a company the builds pipe organs and learn the craft.

For those outside the School of Music, the variety of study in it goes largely unnoticed. When one considers Roberts-Oakland and his status as a pipe-organ performance major, a complete rethinking of what it means to be a music major takes place; the colorful array of studies begins to reveal itself as do the various identities of its artists.

Roberts-Oakland’s senior recital will be in April 2019.