Methamphetamine use continues to plague Iowa

Methamphetamine use in Iowa peaked in 2004, which caused legislation to be created to control pseudoephedrine purchases. Despite these laws, Iowa is the leader in the nation for meth treatment and labs are still being found. 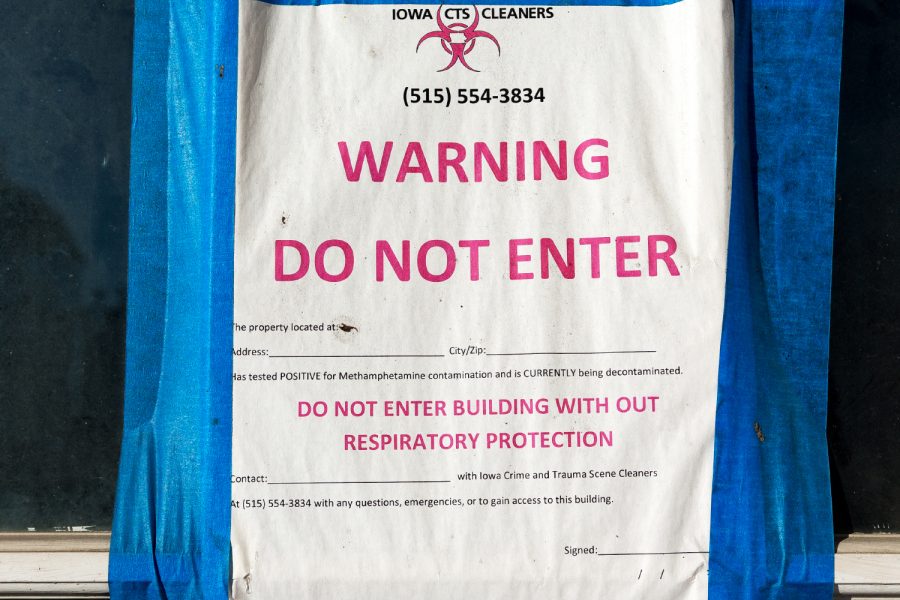 A sign on an apartment building in Washington, Iowa undergoing decontamination methamphetamine contamination on Nov. 19, 2017.

Despite legislation passed to decrease pseudoephedrine purchases in Iowa, methamphetamine consumption is still a statewide issue.

In 2004, busts of methamphetamine labs were at the highest in Iowa history. According to data provided by the Iowa Department of Public Safety, there were 1,500 reported labs. In order to combat meth use and to decrease the risk of coming into contact with potentially explosive labs, Iowa passed the Iowa Pseudoephedrine Control Law.

The law requires purchasers to be at least 18 and to present a valid form of identification. The purchaser must also sign a logbook, which coincides with a pseudoephedrine tracking system implemented by the Governor’s Office of Drug Control.

Dale Woolery, assistant director of the drug office, said the control law moved pseudoephedrine from over-the-counter availability to behind the pharmacy counter. While the law did not make pseudoephedrine a prescription drug or a controlled substance, similar actions were taken to control user consumption.

“The point of the law was to tighten control and monitor inventory so that individuals with legitimate needs could access and use pseudoephedrine without any interference,” Woolery said. “While at first it was a change, and a lot of people thought it was a hassle, I think most Iowans have gotten used to it and appreciate it has made a difference in the number of potentially inflammable and explosive labs that could be near them.”

UI junior Ally Lowe said she recently needed to buy medicine containing pseudoephedrine because of a cold and found that it was less of a challenge to purchase than she originally had thought. The only downside was that she could not buy certain medicines in high school because she was underage.

“In my experience, pseudoephedrine is way more accessible here in Iowa than in other states,” Lowe said. “When I went to Arkansas a few years ago to visit my grandparents, no pharmacy would let me buy it because I was from out of state. They made my grandmother buy it, but before that, they checked her blood pressure, filled out a ton of paperwork, and did a couple other tests before she was able to access it. It was a good 45-minute process.”

Stevie Veach, a University of Iowa clinical professor of pharmacy, said the regulations have been beneficial for pharmacists as well, despite potential hassles for consumers.

“Sometimes, patients get upset that they can’t select multiple products with pseudoephedrine,” Veach said. “Patients with chronic allergies who use these medications can work with their pharmacy and prescribers to get prescriptions with products that might make them go over purchasing limits. I think it has created some good dialogue between patients and pharmacists to help meet needs in legitimate ways.”

While the number of labs has significantly decreased, with only 36 reported labs in 2017 according to the UI Department of Public Safety, dangers still lurk. Woolery said the Legislature reduced the demand for homemade and domestic supplies of meth, but this caused users to search for illicit drugs from other outlets.

“We know that we still have illegal purchases and diversion going on, but it’s on a much smaller scale,” Woolery said. “There are much fewer producer and labs, and fewer Iowans are in harm’s way in regards to the labs’ danger.”