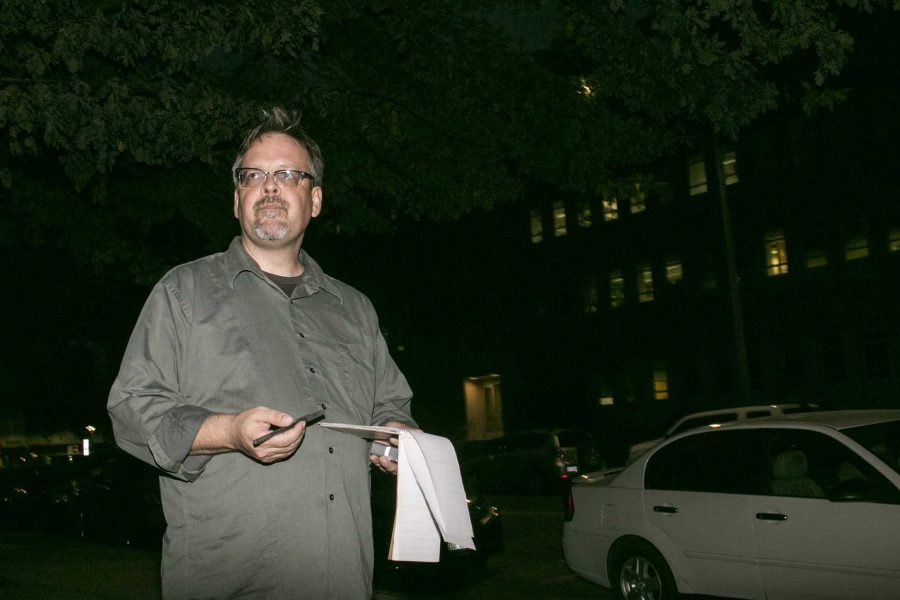 Loren Keller stands outside Van Allen Hall in the spot he stood as a DI reporter in 1991.

Wind and sleet made for a miserable Friday afternoon in Iowa City on Nov. 1, 1991. As students trudged home in the cold, Loren Keller sat alone in the Daily Iowan newsroom, located in the Communications Center — an often cramped space on the second floor.

Keller was in the newsroom making calls and reporting on a story that would run the next week. Fridays meant an empty newsroom because the DI does not print on weekends — usually.

The clock read somewhere between 3:30 and 4 p.m. when all the desk phones started ringing.

At the time, Keller — now a proposal writer at Pearson —  was a junior in his first semester as a reporter.

“I quickly wrapped up my interview and hung up the phone, and it started ringing again immediately, and I picked it up,” Keller recalled. “It was a friend from KRUI and he said, ‘Did you hear? There was a shooting up in Van Allen.’ ”

Van Allen Hall — a towering building perched on the northern end of campus between Seashore Hall and Dubuque Street. The building was named after one of UI’s greatest scientists and scholars, James Van Allen, who was sitting in his top-floor office when the shots of Lu’s gun rang out.

The sound of the shots would make Van Allen Hall synonymous with the most devastating event to shake the UI campus.

Gang Lu first shot Christoph K. Goertz, a professor of physics/astronomy whose time at Iowa was marked by rapid advances in space physics.

He also shot Associate Professor Robert A. Smith and post-doc researcher Linhua Shan in the third-floor seminar room. He then descended to the second floor and shot department head Professor Dwight R. Nicholson.

In Jessup, he first shot student secretary Miya Rodolfo-Sioson. Then, he shot Cleary.

Lu ran upstairs into a classroom, where he hid. Before the police arrived, Lu put the gun to his temple and pulled the trigger. All of the victims, except for Rodolfo-Sioson, were targets on the list Lu had compiled. Lu was enraged about not winning a dissertation award that instead went to Shan, Lu’s former roommate.

Rodolfo-Sioson was the sole survivor of the victims, though she was paralyzed for the rest of her life.

Keller’s friend had told him on the phone, simply, shots had been fired at Van Allen. To the 20-year-old native of Muscatine, the interpretation was a gun had gone off. He didn’t know about the deaths in Van Allen and Jessup. He certainly had never considered the concept of a mass shooting on campus before.

“You don’t forget your first big story,” Keller said. “But this shooting had a visceral impact on this campus and town. It if happened today, it would just be another event in a long series of horribly routine shootings in the nation. Back then, it wasn’t an idea that had taken root in people’s minds. It was a shock. As a reporter, it was just what happened. It was a lot to figure out at night on a deadline.”

Keller grabbed his notebook and Sony Microcassette-corder, which he still carries in his car to this day, and headed up the hill toward the scene of the crime.