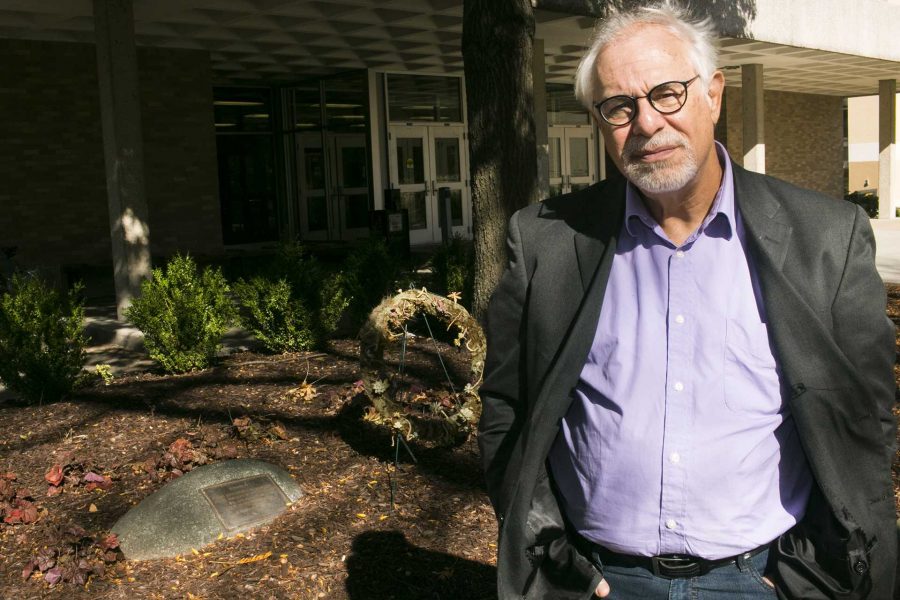 Lyle Muller stands in front of a memorial for the 1991 shooting victims on the south side of Van Allen Hall.

At Van Allen, Loren Keller arrived in time to see paramedics hauling a stretcher out of the building and police posted outside of the east entrance. The scene wasn’t frantic. There weren’t people crying or running around. All Keller saw were professionals doing their jobs — from paramedics and police officers to reporters and photographers.

“It was really quiet,” he said. “Most people on the street still didn’t know what was going on. I had some sense there were multiple victims.”

At one point, Keller tried to get into Van Allen.

“The police sort of pushed me back, so I hung out on the sidewalk with other reporters, just waiting and shivering pretty late until we got word that we would get the details at a press conference.”

Lyle Muller, then a reporter for the Gazette, beat Keller to the scene.

Muller, now the executive director of the Iowa Center for Public Affairs Journalism and the politics coach for the DI, was the Iowa City Bureau Chief for the Cedar Rapids Gazette in ’91.

Muller happened to be at Van Allen earlier in the day, reporting on a story about research the UI Physics Department was working on involving the plasma around asteroids. Muller had built up a stock of sources in the department, and that afternoon he was at the Gazette office. While filing expense reports, another reporter asked if he heard what the police scanner had said.

“The scanner said, ‘Shots fired. Van Allen Hall,’ ” Muller said. Muller told the reporter to call the photographer, and he left. “This was before cellphones, so once I left the office, I would have no way of communication.”

“As soon as I got there, I heard police sirens coming,” he said. Muller ran to the east entrance to get information from students as they came out of the building.

A Gazette photographer found Muller and told him people were shot at Jessup Hall. Muller headed toward the Pentacrest.

When he went around the corner, he saw police cars and ambulances lined up in a row in front of the Old Capitol, their lights illuminating the wintery evening fog.

“It was an eerie sight,” Muller said. “I went over to Jessup, and an officer told me to stay away because there was nothing anyone could tell me yet.”