Coping with the aftermath 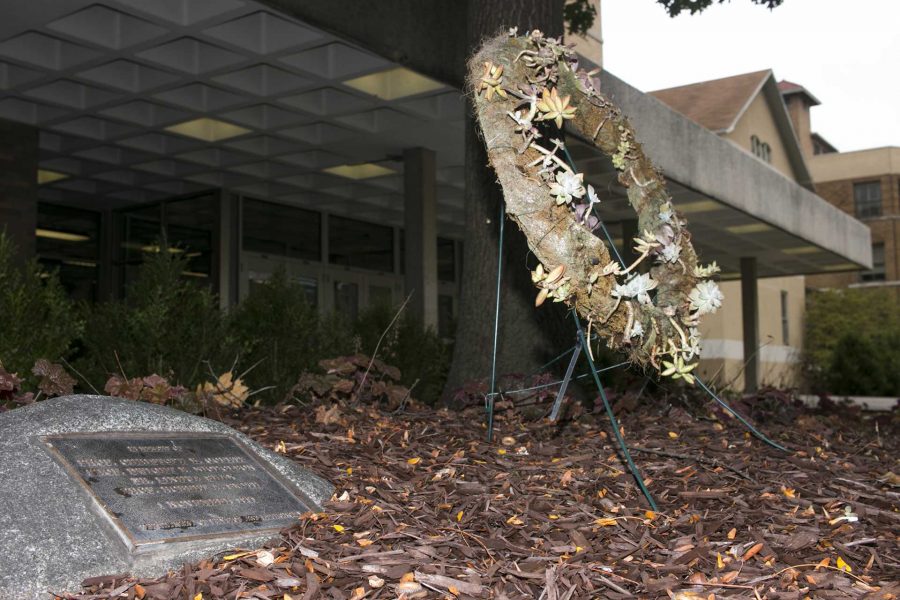 A memorial wreath and plaque rest in remembrance of the 1991 shooting sit outside of Van Allen Hall.

The acts of one student left an enormous scar on the UI campus. Family members and friends of victims along with members of the UI community were suddenly forced to digest the confusing and terrifying reality of it all.

The day after the special edition was published, Kenyon and Casey arrived back in Iowa City, and Kenyon attended the DI’s weekly planning meeting on Sunday to budget Monday’s paper. The dominant image was a photo of the flag on top of the Old Capitol at half-staff.

“It was before school shootings became an unfortunate part of our society and our culture,” Kenyon said. “That photo was our way of saying we were all trying to figure this out.”

Keller had Goertz as a professor in an astronomy class, and the shooting is an event in his life, and journalism career, that sticks with him.

“I think a lot about my astronomy class and Professor Goertz,” he said. “Around the anniversary, it tends to bubble back up. I walk by Van Allen and on the Pentacrest a lot, and it’s kind of in the back of my mind sometimes.”

Williams said the events of that November weekend made him realize he didn’t want to be a photojournalist who covers crime or breaking news.

“I didn’t want to be living with a police scanner by my bedside, running off at a moment’s notice to chase ambulances to the next incident resulting in possible loss of life,” he said. “I personally didn’t have the personality that could remain objective and focused in those type of circumstances.”

For Muller, every shooting that happens today reminds him of Nov. 1, 1991.

“That day is etched in my mind, and it’s also why when anyone makes some kind of threat on campus, us old-timers are jumpy,” he said. “Nobody paid attention to Gang Lu’s warning signs when he was saying things … and they wish they would’ve.”

On top of covering the events, Muller knew some of the victims. He knew Goertz and Nicholson from covering the physics department. He knew Cleary and kept in touch with Rodolfo-Sioson until her death in 2008.

“My view about every place changed,” he said. “Movie theaters, courthouses, churches. Is there someone there who could be upset? I found myself thinking darkly about that stuff after Nov. 1. It took a long time to get it out of my mind.”

Today, there are a few different memorials in Iowa City remembering the victims of the 1991 shooting. One is the T. Anne Cleary Walkway. Another is a plaque outside of Nicholson’s old office in Van Allen, now a meeting room named the Aurora Room. Under a tree on the south side of the building sits a wreath and a stone bearing the victims’ names.

“Every time I walk on the Anne Cleary Walkway, I think about it,” Muller said. “I go read her plaque, which is getting hard to read because it’s getting worn. I think about all the people walking there who don’t know who she is.”

On Thursday, Nov. 7, 1991, over 4,000 people gathered in Carver-Hawkeye arena for a memorial service, honoring the victims of the shooting. Then-University President Hunter Rawlings spoke at the observance, giving opening and closing remarks to the large crowd. 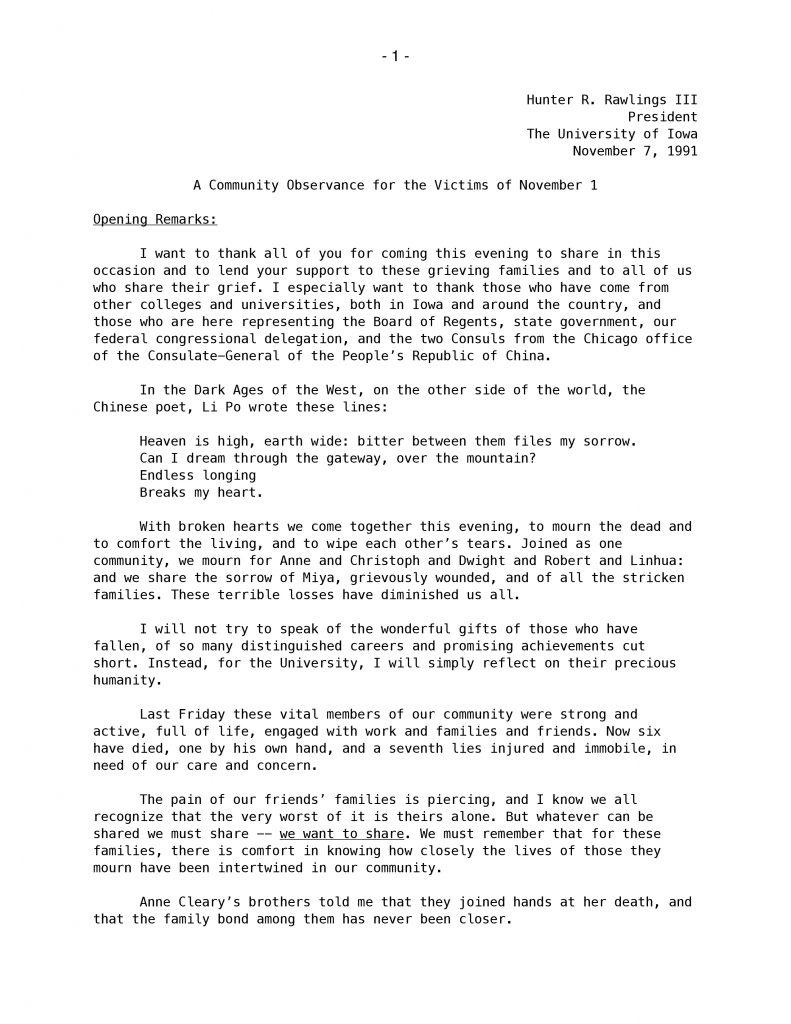 On Nov. 1, 1992, a year after the shootings took place, a crowd gathered on the Pentacrest for a moment of silence for the victims. The text below is from a pamphlet written for the one-year-anniversary event.

Note: This story is part of a series recognizing The Daily Iowan’s 150th anniversary. The series will highlight stories in the University of Iowa and Iowa City communities throughout the DI’s history. The shooting on Nov. 1, 1991, is not often talked about today; we felt it is time to recognize those affected and the locals who were there to share their accounts of the event.

Gage Miskimen would like to thank those quoted in the article for the interviews, meetings, and phone calls that took place the past few months, as well as the Special Collections Department at the UI Main Library for official documents that helped with the reporting process.

If you were there that day or have connections to the event and would like to share your side of the story via a forum, please email us at [email protected]