It might be October, but football season > spooky season. 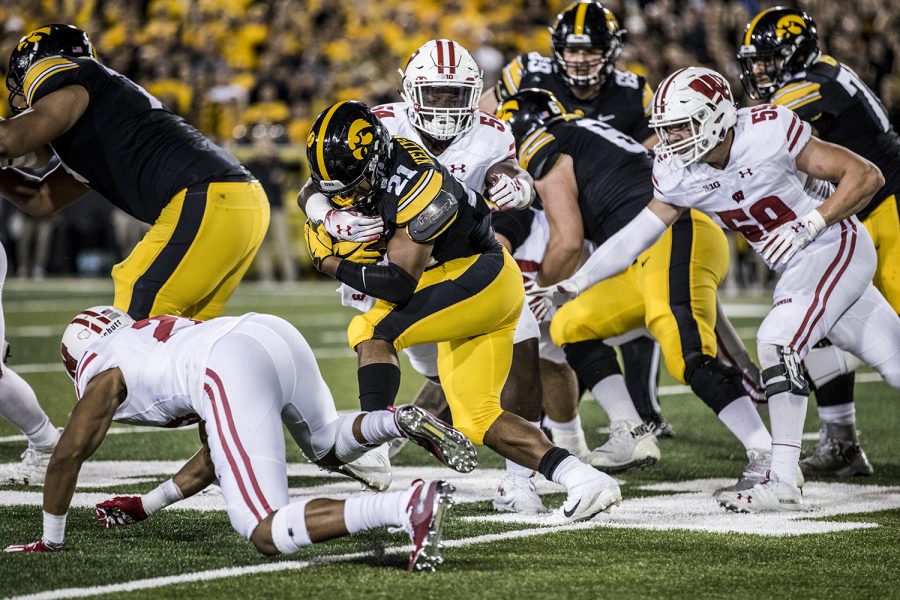 Iowa running back Ivory Kelly-Martin carries the ball during Iowa's game against Wisconsin at Kinnick Stadium on Saturday, Sept. 22, 2018. The Badgers defeated the Hawkeyes 28-17.

3) Wisconsin (4-1):
I think the loss to BYU was a fluke still. I just can’t wait for Penn State-Wisconsin.

4) Michigan (4-1):
Michigan’s real test comes after this week, and we’ll see if the Fighting Harbaughs can handle it.

The game against Wisconsin might not have been a win in real life, but it doesn’t hurt in my coveted power rankings.

6) Michigan State (3-1):
The Spartans lost to Eno Benjamin. I think Iowa would be too mad to let that happen.

10) Minnesota (3-1):
Minnesota has approximately nothing going for it right now.

12) Illinois (2-2):
Lovie Smith lost to the Indianapolis Colts in Super Bowl XLI, and I will never get tired of typing that sentence.

14) Nebraska (0-4):
I can’t get over that Rutgers and Illinois have a combined three more wins than the Huskers.

Michigan’s loss to Notre Dame is a lot better than Minnesota’s loss to Temple. One of these teams will have its first conference loss after the weekend, and I don’t think it will be the Wolverines.

The Spartans have had a better offense and defense this year, and the Wildcats have struggled since Week 1. If Michigan State can play as well as Akron, it’s a wrap.

Fun fact: According to VividSeats, you can find tickets to this game for as low as $3. That should tell you all you need to know about this game.

Iowa is going to learn from the mistakes it made against Wisconsin. What better way to bounce back after a loss than against an unproven Minnesota team?

Ohio State is an offensive powerhouse. As long as the Buckeyes have Dwayne Haskins under center, they won’t have much trouble.

Wisconsin is good. Nebraska is not. I might not be a mathematician or scientist, but I can figure this one out.