The University of Iowa is on a mission to become the nation’s next HEARTsafe Campus, thanks to initiative through Richard E. Kerber Memorial. 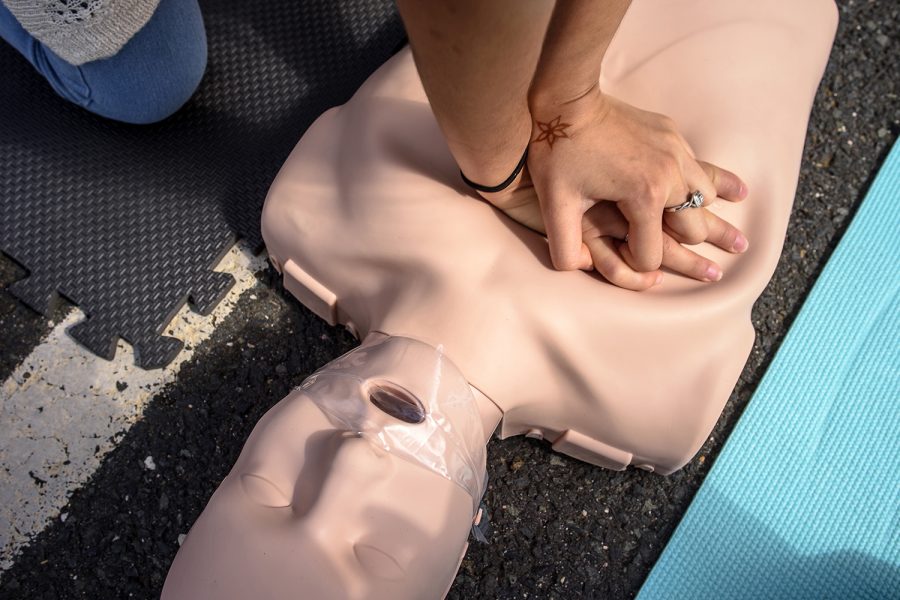 The hands of a student compress the chest of a CPR mannequin during a community training session on July 27, 2018, at the University of St. Joseph in West Hartford, Conn. (Mark Mirko/Hartford Courant/TNS)

Since 2015, four people have been saved by CPR on the UI campus, according to a press release on the College of Liberal Arts & Science’s website. In response, President Bruce Harreld has set a deadline challenging students, faculty, and staff at the UI to become the next HEARTSafe campus by the spring 2019 semester, the release said.

The effort is part of the UI Richard E. Kerber HEARTSafe Initiative, started by UI history Professor Emerita Linda Kerber a year after her husband’s death in 2016.

The goal of the program is to promote healthy heart practices on campus.

Richard Kerber, a UI cardiologist and instrumental figure in the formation of the American Heart Association’s Emergency Cardiovascular Care Committee, devoted much of his career to the science of resuscitation before he died at the age of 77.

Since then, Linda Kerber said she noticed much of the total campus community demonstrated a lack of knowledge in CPR training and automatic external defibrillators, and she proposed the initiative as a result.

“Dr. Linda Kerber realized that although the medical campus, the hospital in particular, was very well-trained in CPR and [external defibrillator] use, very few of the non-medical campus was adequately trained or covered,” said Dianne Atkins, a UI professor emerita of pediatric cardiology and a colleague of Richard Kerber.

To do this, UI administrators encourage faculty, staff, and students to take advantage of CPR training offered by the university, which is free for students through the Red Watch Band program. Training includes instruction on the use of external defibrillators.

“The goal is to have at least 5 percent of the campus’s overall population trained in CPR,” said Bruce McAvoy, the fire-safety director in the UI Public Safety Department.

The press release said the UI is working to ensure that all campus buildings are equipped with the defibrillators.

Linda Kerber stressed the importance of being cognizant of defibrillator-equipped areas, and she noted how they can be easily identified in each building by a horizontally positioned sign above the device, which is typically mounted on a wall.

“One of the things we can easily do is get a whole campus community to just be watching, just have a part in your brain noticing, where all these new [defibrillators] are,” she said. “That can make a big difference in an emergency.”

Atkins, agreeing that the initiative was important, said sudden cardiac arrest is much more common than people may realize.

“Across the U.S., 350,000 people die every year [from it],” she said. “Across the U.S., our survival is only 10 percent. But we know that if someone receives immediate CPR by the people who are standing around them, then their chances of survival are tripled.”

Kerber’s initiative has made the campus safer in only a year’s time. With a few months remaining for the UI to reach its goal, the number of CPR-trained campus community members continues to grow.