Northanger Abbey has been groomed to fit the stage, and it will open on Friday at the Theater Building. 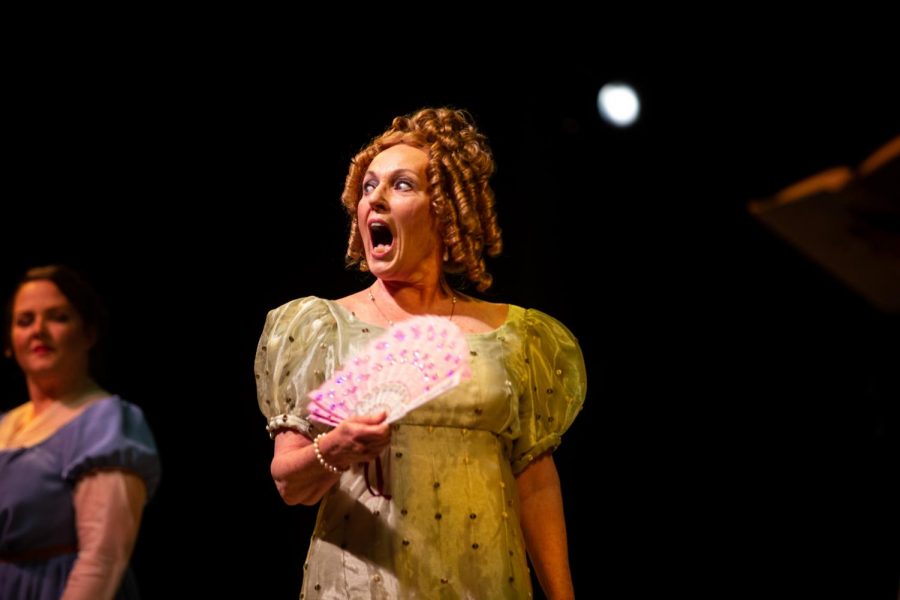 When Jane Austen was 20 years old, she wrote her first novel and sold it to a publisher. The publisher decided to not publish Austen’s brainchild but refused to sell it back to her. It was not until after Austen’s death that Northanger Abbey was published.

That was in 1817. Two hundred years later, Austen remains high on the throne of classic literature. Some of the notable author’s work has been adapted to fit the stage, with Northanger Abbey being one of them.

Presented by the Theater Department, the UI Theater Building will transform into the Regency Era, with gentile satire, horse-drawn carriages, and lavish balls at 8 p.m. Friday.

“At first, I wanted to do Sense and Sensibility, because I had seen the actual production and thought that it was so charming,” adapter and Director Carol MacVey said. “If you do it right, you can adapt these novels to the stage. Northanger Abbey’s cast is young, and we have students who can be cast as young people.”

Unlike most of 19th-century literature, Northanger Abbey’s main heroine is neither weak nor weepy but is seen as wild, brave, and imaginative. Seventeen-year-old Catherine Morland envelops herself in gothic novels but starts to erase the fine line between real life and her imagination, which can be troubling for any woman of any century.

“She’s this fun teenager who is blunt, honest, and naïve,” said Mackenzie Elsbecker, who plays Catherine. “She understands things but not to an extent. Catherine sees the good in people until she can’t see it anymore.”

The 19th century’s gothic novels and their effects on an adolescent can also be noted as a parallel between present-day media and the reality checks that come with it.

“Where do people get ideas [on] how to kiss?” MacVey said, rhetorically. “If you think that’s reality, it’s not always a good thing. You have to observe life, take it in, and make up your own mind with what you want to be in the world.”

To adapt ink-blotted paper to the stage is a challenge for any director. Northanger Abbey stretches for miles with its dense language and satirical themes. Where does one begin with trimming such literature?

“Carol MacVey and I began by sitting down and having lots of conversations about the book,” said Molly Winstead, the dramaturge and co-adapter of the play. “We had to ask ourselves what we felt compelled to put on the stage, and what we felt was missing from other stage adaptations of the book. We came away feeling most compelled by the voice of the narrator in the novel, which we have interpreted as Jane Austen’s voice.”

With Austen’s narration embedded in the play, the audience may notice how she focuses in on the relationships among women. Catherine meets Isabella, her first-ever real friend outside of her siblings. Northanger Abbey sheds light on relationships while Catherine comes of age.

“Her biggest challenge throughout the novel is learning to make judgments about the world around her, a challenge complicated by her imagination’s dependence on popular gothic novels of the day,” Winstead said. “Catherine is more interested in fantasy than reality. It’s a coming-of-age story with plenty of common ground for people today.”