In light of tariffs and harvest season, Iowa’s agriculture is feeling economic pressure, which has led to an increase in mental health concerns in the state’s rural areas. 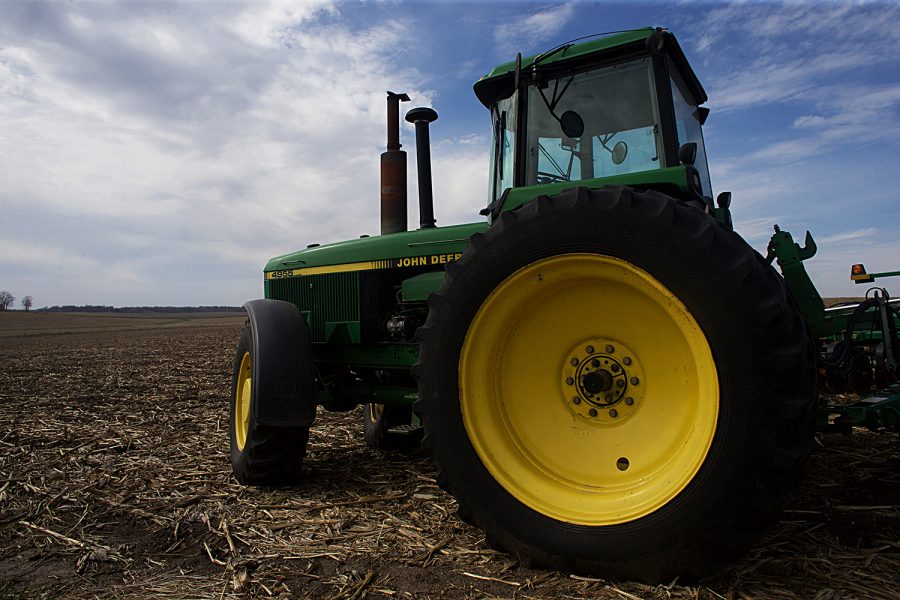 A tractor is parked in a field outside of Iowa City, Iowa on Wednesday, April 15, 2015.

Michael Rosmann, a national agriculture behavioral specialist, clinical psychologist, and farmer from Harlan, Iowa, said he noticed an increase in farmers reaching out to him for mental-health assistance since China imposed retaliatory tariffs in June.

“It’s always economic stress that leads people to seek mental-health services,” Rosmann said in an interview on Sept. 28. “There isn’t really a bright spot in any aspect of agriculture right now.”

In June, China imposed retaliatory tariffs on some U.S. agriculture products, and Iowa’s agriculture industry took a $600 million hit. The most recent report details the trade tariffs could cost the state as much as $2 billion. China is Iowa’s No. 1 customer for soybean products, and farmers are experiencing a three-year price-drop in soybean prices.

NAFTA negotiations this week came to fruition to cement a triangular trade deal among the U.S., Canada, and Mexico.

Rosmann said had he been contacted by telephone, email, and by mail regarding mental-health assistance, but it’s often difficult for farmers to find services that understand agriculture and behavioral health, he said.

To offset that difficulty, Rosmann said, he heavily involved himself in a Farmers First Act, which was introduced in the U.S. House and Senate in April. Sen. Joni Ernst, R-Iowa, cosponsored the bill, which hasn’t made it past introduction.

The bill would, in part, allow successful applicants to receive grants to set up their own statewide farm-crisis services. The act would provide funding through the USDA and the Health and Human Services Department to state agriculture departments so they can establish helplines and websites.

Iowa has a helpline for farmers, the Iowa Concern Hotline, which offers 24/7 phone support and an email hotline to ask staff questions on legal issues, stress, and crisis or disaster, but Rosmann said there is no provision for follow-up counseling.

Rob Ewoldt, a soybean farmer in the Davenport area who voted for Trump in 2016, said he attended a meeting that addressed opening a mental-health facility that would be available to the people of Muscatine, Cedar County, Clinton County, and Jackson Counties — all of which are rural with populations between 18,000 and 50,000.

“I’ve been hearing from supervisors that there just isn’t enough money. This is nothing new,” Ewoldt said. “We heard this when the past three governors were in office.”

Lori Elam, the CEO of Eastern Iowa’s Mental Health Region, one of 14 government-directed mental-health regions, said the Scott County Mental Health Center sees about 10,000 to 11,000 people a year, drawing from a county population of 172,000.

Elam said there is a new hospital being built in Scott County that will specialize in strategic behavioral health. It will provide 72 psychiatric beds and provide availability to anyone in the surrounding regions.

“There is a shortage of hospital beds in Iowa,” Elam said. “Once this opens, that will help a piece of it.”

Ewoldt said a farmer in his county committed suicide just a month and a half ago.

“It is a stressful time, and I won’t say I’m immune to it,” Ewoldt said. “And if you’re farming and you aren’t under stress right now — I’d be shocked.”

Larry Hodgden, the vice county chair for the Cedar County Democrats and a part-time farmer, said most farmers are generally concerned about mental-health care issues. He said farmers have to pay high prices for decent health care.

“Republicans have not served farmers very well by tearing down Obamacare,” Hodgden said.

If you are, or someone you know is, having suicidal thoughts, please call the National Suicide Prevention Lifeline 1-800-273-8255.