Focusing on issues like affordable housing and transportation, Ann Freerks and Bruce Teague are vying for a vacant City Council position. 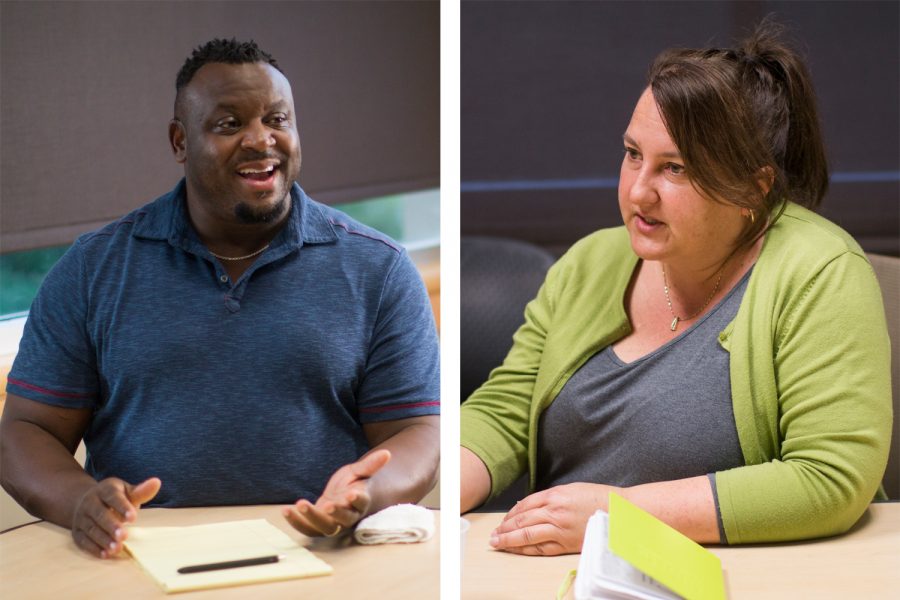 Bruce Teague (left) and Ann Freerks will be on the ballot Tuesday in Iowa City's special election for a vacant at-large council seat. (Photos by Charles Peckman and Kat Zentz/The Daily Iowan)

The polls are open from 7 a.m. to 8 p.m. Johnson County elections deputy Carrie Nierling said to check the Johnson County Auditor’s website for information about the location of your polling place.

Early voting for the special election has been going on since Sept. 21. In-person early voting ended Monday.

In the primary election, Freerks received 27 percent of the vote, and Teague garnered 21 percent.

Christine Ralston, Brianna Wills, and Ryan Hall received 20 percent, 18 percent, and 14 percent of the vote in the primary, respectively.

Freerks, whose volunteer work includes serving on the advisory board of Any Given Child, said the issues her platform focuses the most on are affordable housing and transportation. She also hopes to implement affordable-housing measures for residents who do not necessarily qualify for affordable housing but struggle to pay their rent.

“Quality housing — it will start from the outside,” Freerks said. “Places will become a little less expensive the farther away [from downtown Iowa City] you are.”

“I’m an independent voter in the way that I look at things,” Freerks said. “I carefully assess everything, and the situation, and what is the best for the city. It’s not even about my vision, I’m just one of the tools to make things happen. I see it as me helping to fulfill those goals. If things aren’t goal-based, then things fall apart.”

Teague said he is running for the vacant seat because he wishes to do something more for Iowa City. He has noted that he moved to Iowa City while he was in high school — without his parents — and said he found a family in the community.

Affordable housing is an area Teague said is frequently discussed in the Iowa City area, but the way we talk about it needs to change.

Even though both candidates discuss issues important to the Iowa City area, Nierling said, many people do not understand the importance of local elections.

“Special elections do tend to have a lower turnout,” she said. “There isn’t much press with more local elections. Local candidates tend to be less known — people say to themselves, ‘There is a general election in November,’ so when you have a special election, they’re not expecting it.”

Despite this attitude among voters, Nierling said, she hopes the special election has a higher turnout than the special primary, which garnered fewer than 9 percent of eligible voters.

“I mean obviously, it’s important to vote in local elections — they’re as important as national elections,” she said. “Groups like City Council have a lot more of an impact on a local level.”