Iowa cross-country holds its own at Notre Dame Invite 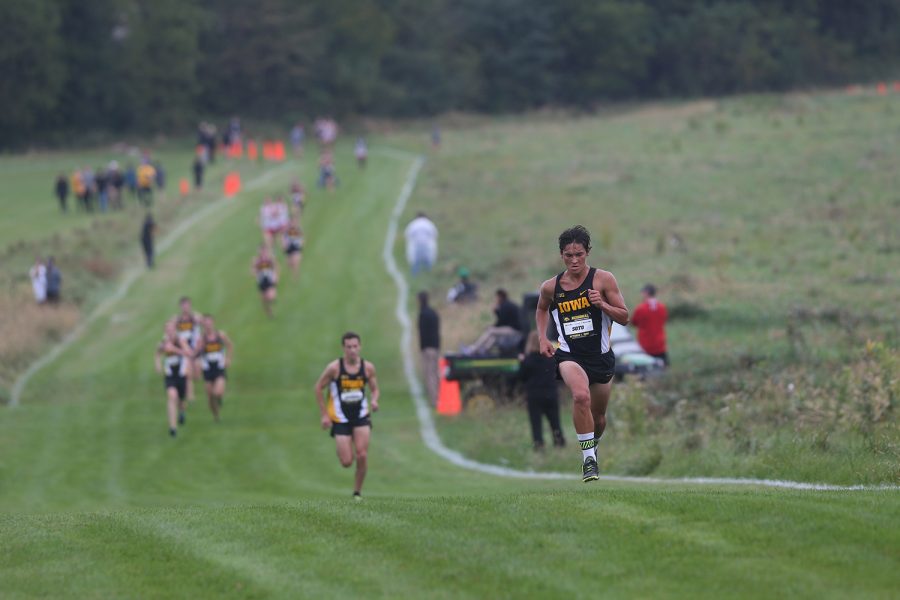 It was a busy weekend for Hawkeye cross-country, as it sprang back in action in Notre Dame’s Joe Piane Invitational. The Iowa women finished seventh in the “blue” 5,000 meters, and the men placed ninth in the “blue” five-mile.

Iowa’s harriers faced not only the largest field of competition so far but also the most competitive. Regionally ranked teams from all over the country traveled to test out their strides.

The Hawkeye women headed into this weekend ranked No. 13 in the Midwest region and ended up finishing behind only six other teams: BYU (No. 3, Mountain), Furman (No. 2, Southeast), Florida State (No. 4, South), Notre Dame (No. 5, Great Lakes), Duke (No. 5, Southeast), and Northwestern (No. 5, Midwest).

“This is the toughest competition that we’ve had so far this season,” senior Andrea Shine said. “I think just knowing that we’re able to compete with some of the best teams out there and not holding ourselves back by thinking that these teams are better or more competitive than us allowed the girls to really get in position to be strong competitors, and then as a result, we had one of our best team finishes of the season, given the level of competition.”

This underdog finish was led yet again by Shine. The senior placed 15th in the 5,000 meters, breaking a personal-best by six seconds with a time of 17:20.29. Following Shine from Iowa was Megan Schott at 30th, Anna Hostetler at 41st, Grace McCabe at 76th, and Jessica McKee at 91st.

The first five Iowa women finished within a minute of each other and will continue to work toward shrinking that time.

“I think the team performed great this weekend,” Shine said. “I’m left feeling pretty content where we are, not as a team, but where we are in the season. At Notre Dame, everybody made some great improvements trying to slowly close the gap from our 1 to 5 runner.”

Shine wasn’t the only senior to lead the team and break a personal best.

The lengthy five-miler presents the opportunity for the harriers to put their racing strategy and endurance to the test.

“It’s exciting to get a chance to compete with the best,” Soto said. “It was fun to throw my hat in the ring with them, and see how long I could hang out, and if I could beat some of the other guys.”

The Iowa harriers will have two weeks off before the women travel to Illinois for the Bradley Invitational on Oct. 12 and the men to Wisconsin for the Pre-Nationals meet on Oct. 13.