After passing regulations requiring multi-family residences to provide recycling bins, as well as banning cardboard in the landfill, Iowa City is working its way to having a sustainable recycling system. 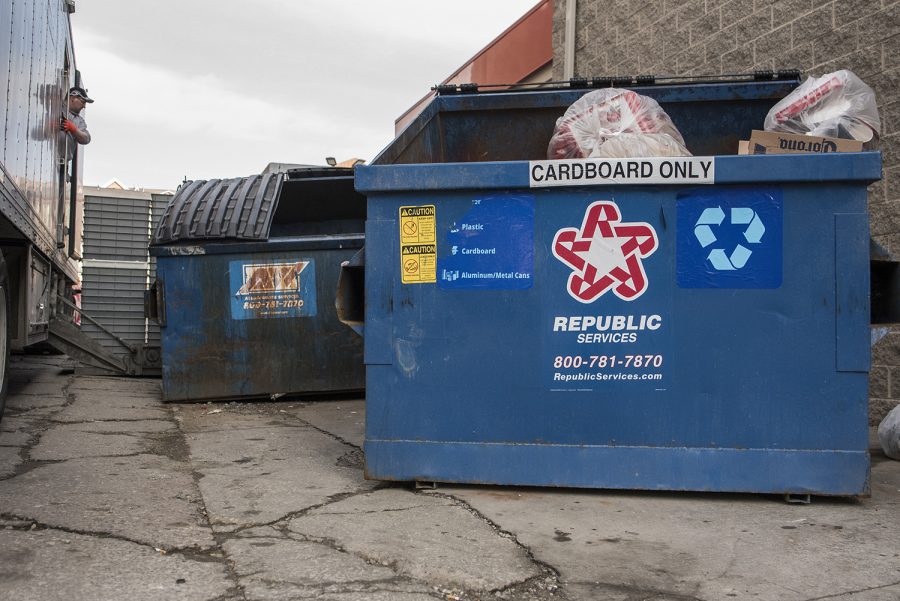 Newly presented cardboard dumpsters are seated behind the Three Towers apartment complex at 313 S. Gilbert St. on Sunday, Jan. 28, 2018. The Iowa City City Council passed a mandate in Nov. 2016 requiring all rental units of four tenants or more to provide recycling services. This resolution will be enforced by the end of 2018.

City recycling coordinator Jane Wilch said half of Iowa City’s housing is made up of rentals.

Before the implementation of the recycling regulation for multifamily rentals, she said, half of Iowa City’s residents were without provided recycling bins and education. Most of these residents are students or work in Iowa City. These groups of people are more likely to not have cars, Wilch said.

These tenants were disenfranchised by being unable to take recycling to the appropriate centers. Wilch said this was the spark that initiated the rule enforcement to make it easier on the population, she said.

City senior housing inspector Stan Laverman said there are a couple of months left for landlords and property managers to renew their permits.

The last properties that have not fulfilled the recycling ruling had renewed their rental permit before recycling bins would be required, he said. Those permits will be renewed at the end of this month.

Soon, he said, it will be mandatory for all multifamily rentals to have the necessary containers.

Iowa City also switched to single-stream recycling at the end of 2017, and at the start of 2018, it banned cardboard from the landfill.

Another contributor to the influx of recycling is the former City Carton recycling center burning down. The people who formerly took their recycling to that center are now dispersing to the other centers in Iowa City. Wilch said the recycling centers went from emptying a few times a week to emptying every day.

“While we continue to work with buildings on campus to conduct waste audits and building assessments to see where recycling improvements can be made, we are putting more effort into identifying opportunities for waste reduction,” MacKenzie said. “Waste reduction ranks at the top of the EPA’s waste hierarchy and offers the most benefits for the university in terms of environmental, social, and economic impacts.”

Both Wilch and Laverman agree that the road to recycling is a slow process; tenants and landlords have to be educated on proper recycling habits.

“It is naïve to think it is all going to go perfectly on the part of the tenants’ recycling and the landlords’ providing services,” Laverman said. “The big picture is going well, but there are growing pains as you make these changes.”